Market research firm, comScore, recently released the latest data from its MobiLens service. It profiles key trends in the US mobile phone industry for the three month period ending March 2012. The analytics firm’s study surveyed more than 30 000 US mobile subscribers.

The study found that Samsung is still the top handset manufacturer overall Stateside, snapping up 26% market share. This is hardly surprising since the Korean tech giant recently dethroned Nokia as top mobile phone vendor during Q1 2012 and also knocked Apple down to second place in terms of smartphone shipments over the same period.

Google’s Android mobile operating system (OS) continues to grow its share in the American smartphone market, accounting for more than half (51%) of US smartphone subscribers. Apple’s iOS mobile platform also gained just over a percentage market share compared to December 2011, and captured 30.7%.

For the three-month average period ending in March, 234 million Americans age 13 and older used mobile devices. Samsung once again found itself in pole position as the top OEM (original equipment manufacturer), as 26% of US mobile subscribers (up 0.7 percentage points), are using a Samsung mobile device.

Hot on Samsung’s Korean heels is its neighbour, LG, which gobbled up 19.3% US market share. Apple continues to raise its stake in the US OEM market, and completes the top 3 with 14% of mobile subscribers, which is an increase of 1.6 percentage points compared to December 2011.

The Cupertino based iPhone and iPad maker is followed by Motorola Mobility with a share of 12.8% and Taiwanese smartphone and tablet manufacturer HTC with 6%. 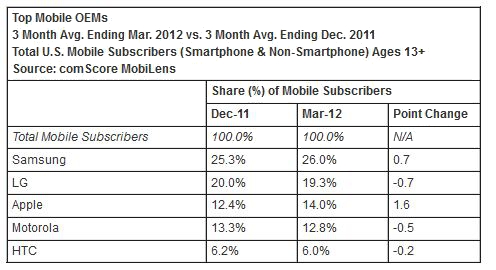 According to comScore, more than 106 million people in the US owned a smartphone during the three months ending in March 2012, which is an increase of 9% compared to December 2011. Google’s Android is still on top of the smartphone platform charts with the lion’s share (51%) of the market (up 3.7% compared to year end 2011).

Android is followed by Apple’s iOS with 30.7%, whilst Canadian smartphone and tablet maker, RIM’s (Research In Motion's) BlackBerry OS platform ranked third with a 12.3% share. Despite new Windows Phone Mango-powered smartphones being launched in the States, such as the Nokia Lumia 900, Microsoft’s share (3.9%) is down 0.8% compared to December 2011, whilst Symbian holds steady at 1.4%. 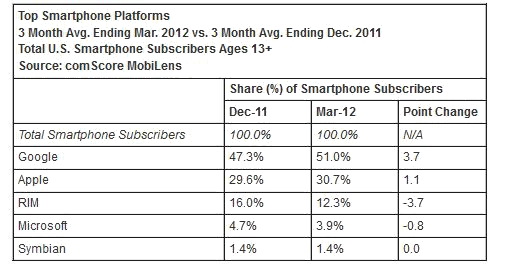