Market research firm comScore has released the latest data from its MobiLens service, looking at key trends within the US mobile phone industry over the three month period ending August 2012. The analytics firm’s study surveyed more than 30 000 US mobile subscribers.

Just like last month, Korean tech giant Samsung is still leading the pack as the top handset manufacturer overall courtesy of its 25.7% market share. As expected Google’s Android mobile operating system (OS) remains most US smartphone users' platform of choice, with the OS now running on 52.2% of all smartphones subscriber's devices Stateside.

Even before the iPhone 5's launch in the US, Apple continued to increase its mobile OS share with its iOS platform now operating on of 34.3% smartphones.

comScore stated that more than 234 million people owned mobile phones (smartphone and feature phones) during the three months ending in August 2012. This is an increase of four million mobile phones compared to June 2012’s figures.

With Samsung still comfortably in pole position, the battle for second place is heating up with LG and its 18.2% market share managing to keep ahead of third placed Apple with its 17.1% stake. Google-owned Motorola Mobility occupies fourth place courtesy of its 11.2% stake, whilst Taiwanese smartphone and tablet maker HTC holds down fifth spot with its OEM market share of 6.3%. 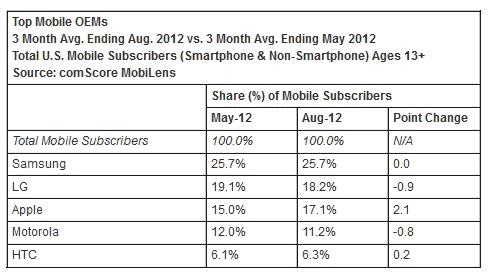 Of the 234 million mobile phone owners in the States, 116.5 million are making use of smartphones during the three month period ending in August 2012, which is an increase of six percent compared to May 2012.

Both Android (up 1.7 percentage points) and iOS (increase of 2.4 percentage points) grew their respective OS shares. BlackBerry maker RIM (Research In Motion) ranked third, but saw its market share drop from 9.5% to 8.3%, whilst Microsoft's Windows Phone OS holds steady at 3.6%, as does Symbian with its 0.7% minority market stake. 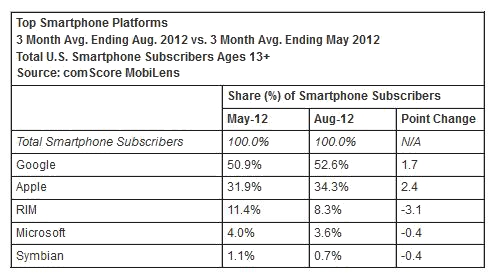