Gartner Says by 2017 Your Smartphone Will Be Smarter Than You

-       Analysts Discuss the Future of Smart Devices at Gartner Symposium/ITxpo 2013, 10-14 November in Barcelona

Barcelona, Spain, 12th November, 2013 — Smartphones will soon be able to predict a consumer’s next move, their next purchase or interpret actions based on what it knows, according to Gartner, Inc. This insight will be performed based on an individual’s data gathered using cognizant computing — the next step in personal cloud computing.

“Smartphones are becoming smarter, and will be smarter than you by 2017,” said Carolina Milanesi, research vice president at Gartner. “If there is heavy traffic, it will wake you up early for a meeting with your boss, or simply send an apology if it is a meeting with your colleague. The smartphone will gather contextual information from its calendar, its sensors, the user’s location and personal data.”

Gartner analysts are examining the future of smart devices at Gartner Symposium/ITxpo 2013, which is taking place in Barcelona through 14 November.

“Mobile phones have turned into smartphones thanks to two things: technology and apps,” said Ms Milanesi. “Technology has added features such as cameras, locations and sensors, while apps have connected those to an array of functions that, for the most part, add and improve our day to day life from a social, knowledge, entertainment and productivity point of view.”

What smartphones can do through apps has improved and broadened thanks to the personal cloud. “We assume that apps will acquire knowledge over time and get better with improved predictions of what users need and want, with data collection and response happening in real-time,” said Ms Milanesi.

The first services that will be performed "automatically" will generally help with menial tasks — and significantly time consuming or time wasting tasks — such as time-bound events (calendaring) such as booking a car for its yearly service, creating a weekly to-do list, sending birthday greetings, or responding to mundane email messages. Gradually, as confidence in the outsourcing of more menial tasks to the smartphone increases, consumers are expected to become accustomed to allowing a greater array of apps and services to take control of other aspects of their lives - this will be the era of cognizant computing.

By 2017 mobile phones will be smarter than people not because of an intrinsic intelligence, but because the cloud and the data stored in the cloud will provide them with the computational ability to make sense of the information they have so they appear smart. “Phones will become our secret digital agent, but only if we are willing to provide the information they require,” said Ms Milanesi. Regulatory and privacy issues, as well as the level of comfort users will have in sharing this information, will differ considerably across age groups as well as geographies.

To reach a complete personal cloud experience, cognizant computing consists of four stages: Sync Me; See Me; Know Me; Be Me (see Figure 1). Sync Me and See Me are currently happening, while Know Me and Be Me are still to occur. 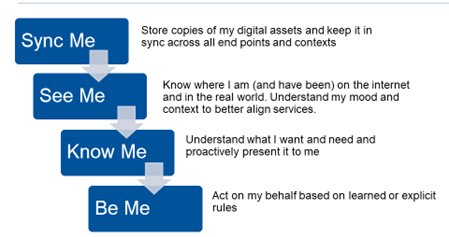 There are two aspects of how cognizant computing will impact the market. It will have an impact on hardware vendors and on the other services and business models.

Hardware vendors will continue to face the challenge of hardware commoditisation as ecosystem owners will focus on shifting consumers’ focus away from the hardware and onto their services and brands. With the move into a cognizant computing world, the battle to own the consumer will intensify as vendors will try and control the data in the cloud, and through that the relationship with the users. Hardware vendors will unlikely be credited with the good, but surely be blamed about the ugly when the device fails to deliver. The device will be seen as dumb rather than the malfunctioning of the real brain: the cloud.

Over the next two to five years, cognizant computing will become one the strongest market forces affecting the entire ecosystems and value chains across IT. Monetisation will flow from the increased knowledge of the consumer and the fine-tuning of offers that can now be achieved, and are increasingly perceived as personal and highly relevant — which should lead to an increase in spend. The mobile commerce opportunities are vast as the smartphone is empowered to make purchases via the consumer’s mobile wallet or credit card, all via their mobile phone. “It is about having the right rules and permissions in place set by the user so that only actions that are pre-approved will happen — rather than the smartphone making ‘rogue’ purchasing decisions,” said Ms Milanesi.

While Gartner said privacy will be an issue for some consumers, for many it will only be an issue if they do not get enough in return for their personal data. Consumers tend to give up a lot for convenience. The benefit of certain apps might instigate behaviours that were unthinkable yesterday.

“Mobile phones have been our trusted companions for years channelling the natural need we have to communicate with others and express ourselves first with voice, then with the internet, and more recently through applications,” said Ms Milanesi. “Smartphones, their technology and operating systems have been radically changing other devices from PCs to televisions. The era of personal cloud is empowering users as well as devices to get access to and share more and more data. Over the next five years, the data that is available about us, our likes and dislikes, our environment and relationships will be used by our devices to grow their relevance and ultimately improve our life.”