How a Cape Town based social enterprise is conquering the world

Why the switch to smart video requires more dynami...
0
comments

Lumkani, the 2015 South African winner of The Venture, a global competition for social entrepreneurs initiated by luxury whisky producer Chivas Regal, may soon be rolling out its technology in the slums of Bangladesh. This proves that South Africans are continually striving to win the right way.

Bangladesh is one of the countries with a large number of people living in fire-prone slums.

Lumkani seeks to address the challenge of shack fires and to minimise the displacement of families in South Africa’s urban informal settlements. As one of the top five global finalists in The Venture, Lumkani walked away with $75 000 to use for business development.

In partnership with humanitarian organisation World Vision, Lumkani continues to bring about social change, and is finalist in the Google Impact Challenge in Australia, where the winner will receive a $575 000 grant. Winning the grant may mark the beginning the company’s foray into global markets.

Co-founder and Director David Gluckman says winning The Venture competition helped Lumkani improve its technology and research other products it can tie to the device. The company has thus far installed more than 8 500 devices in big and fire-prone informal settlements such as Masiphumelele in Cape Town and Imizamo Yethu in Hout Bay. 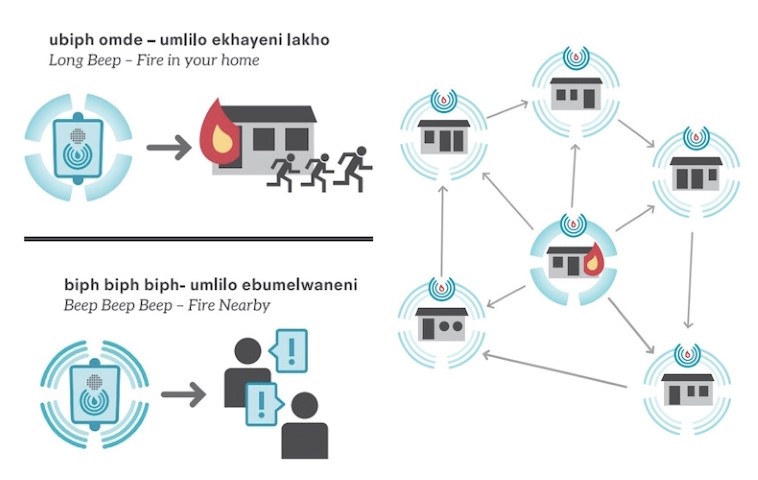 “The Venture has absolutely helped us and continues to; we have been able to scale up on research and development and we’ve launched a new version of the product, which is easy to manufacture, better design and we’ve been able to put in lots of new software,” says Gluckman. “It’s also allowed us to scale up our marketing and sales, get the right resources and extend our product range offering.”

In future, Lumkani plans to develop a device that will look to include the capability to alert communities of other risks such as storms, tsunamis and floods.

Shelley Reeves, Marketing Manager: Scotch Whisky at Chivas Regal, says it is heartening to see Lumkani getting international recognition for its innovation. “This is a truly innovative venture that has a big impact on social wellbeing, and Chivas Regal is proud to be the enabler who helped Lumkani get the recognition they deserved through The Venture. Its continued success has shown that entrepreneurship can be an effective tool to socio-economic problem solving. We encourage many other creative thinkers to come forward with their ideas as part of The Venture so that each year we can build on the network of social entrepreneurs working together to combat social issues,” says Mrs Reeves.

The third year of The Venture competition was launched and both established and aspiring entrepreneurs can submit their business plans on www.Theventure.com to stand a chance of winning a portion of USD 1 million; represent South Africa on a global stage and win  R350 000.  Competition entries close on 05 November 2016.

“Be honest with your product. I always tell entrepreneurs to develop products or services that are needed; products that solve real challenges faced by people.”