When it comes to flash drives, and basically all forms of data storage, we've seen a steady increase in storage sizes over the years. At first we were chuffed with our 256 MB or 512 MB (for the rich kids) drives and this has now evolved to the point where most people carry from around 1 to 4 GB of storage space on their person, some even going up to 64 GB.

Size to die for
However, Kingston seems to have decided that it's their sacred duty to blow all these capacities out of the water by releasing what they claim to be the world's largest flash drive, the Kingston DataTraveler 310 (DT310), weighing in at a whopping 256 GB.
The massive capacity of the DT310 dwarfs that of many notebook hard drives, encroaches on the market of portable HDD's and would have been an unimaginable capacity to fit on such a tiny drive only a few years ago.
The drive is roughly the same size as any standard USB stick, measuring in at only 7.3 cm long. It sports an attractive red and black accented design and is made of plastic and metal, making it feel very sturdy. 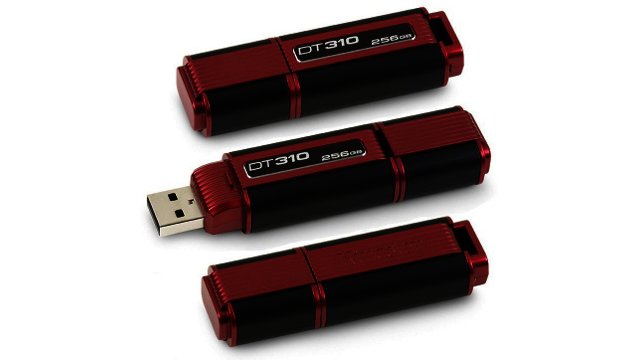 Transfer times to... die for?
The only real downside to the DT310 (excluding the price), is that using USB 2.0 technology to transfer such a large amount of files form a flash drive can take quite a while. Kingston claims data rates of 25 MB/sec read speed and 12 MB/sec write speed, which is decent but is hardly going to see your files flying across the digital divide.
During testing we copied a 700 MB movie file from the Kingston DT310 to our PC and vice-versa. Transferring the file from the drive onto the PC was relatively quick, taking 26 seconds. However when it comes to sending data from your PC to the flash drive the Kingston performed somewhat slower, taking 58 seconds in total.
If you're an early technology adopter though and have one of those nice new blue USB ports on your computer, then you can use USB 3.0 to transfer files. Using the USB 3.0 equipped Asus N43SL we transferred the same 700 MB file from the flash drive to the notebook in 19 seconds, while transferring from PC to drive took 40 seconds.
The drive also contains Kingston's PasswordTraveler software, which enables users to create a password protected 'privacy zone' on the device for storing sensitive files.
Conclusion
To top it all off Kingston has put a five year warranty on the DT310, so look forward to at least half a decade of truly pocket-sized mass storage. If you're someone who likes to carry 54 DVDs worth of data in on their person, then the DataTraveler 310 is just what the doctor ordered.
The Kingston DT310 is currently available for a recommended retail price of R7550.