Throughout their many years of experience in the world of games, developers Maxis have shown us how to manage sprawling cities in SimCity; we've learned how to keep up with the Jones's in the virtual dollhouse of The Sims, and even breathed life into what was previously simply pond-scum in the ambitious Spore.

Now the iconic studio has taken a bit of a detour from its usual simulation roots and released Darkspore, an online dungeon-crawling action RPG. 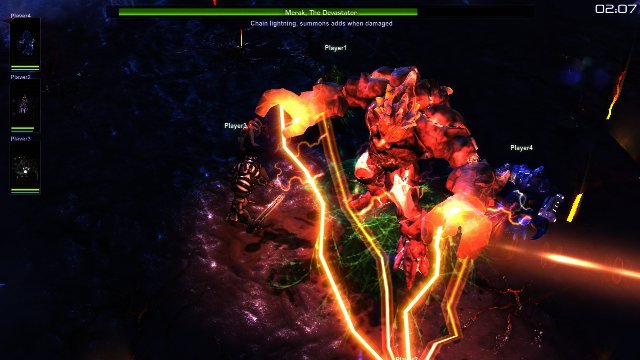 The game's plot revolves around the Crogenitors, a legendary alien race who had once ruled over the galaxy, using their great minds to bend the essence of life to their will. Through their manipulation of DNA they created powerful genetic heroes who became known as “Living Weapons”.

One of their kind discovered a way to accelerate these genetic mutations through an experimental amino acid, creating what was dubbed E-DNA. Capable of undergoing millennia of evolution within a matter of hours, the unstable substance caused a genetic nightmare, resulting in the near extinction of the Crogenitors. You start the game as one of the final surviving Crogenitors, awakened from cryogenic sleep by your ship’s AI, and tasked with helping to rebuild your race, and extinguish the Darkspore threat.

Apart from its initial dramatic entrance though, Darkspore’s narrative isn't overly engaging, with the story mostly being narrated by your ship's AI as you steadily complete missions. This however doesn’t detract form its additive mechanics in the slightest. 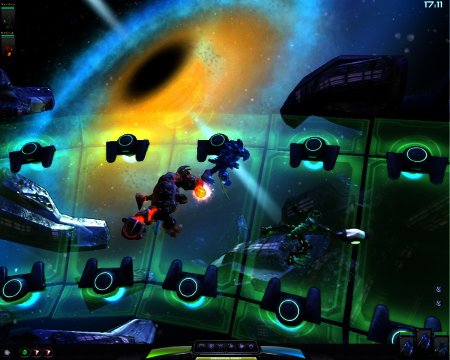 Gameplay in Darkspore is of a purely action-based nature, and takes obvious cues from other popular RPG slashers the likes of Diablo, wherein point-and-click dungeon looting is the norm. As one of the last Progenitors, our ship gives us access to a number of Living Weapons (heroes) initially, and more are unlocked as you level up in the game.

Players take a squad of up to three monsters into battle, controlling one at a time but being able to switch between them on the fly with a quick hotkey. The basic point-and-click control system is easy to pick up, and, thanks to the variety of skills and variables on offer, it doesn't become stale in the slightest

The different heroes come in three classes namely; tank, ranged and speed. In addition to these broad definitions, each hero also belongs to one of five genesis types (think of elemental affiliations), each utilising a different combat style. ‘Plasma’ heroes for example focus on hard hitting attacks, often involving fire, lightning or a critical hit ratio whilst ‘Necro‘ heroes can transform into spectres and suck the life from enemies.

These different types require players to weigh each heroes' strengths and weaknesses against another to try and create the best combination possible. A trail and error process to be sure, but a very enjoyable one to go through.

Every hero also sports their own skills to utilise in a fight, ranging from teleporting and critical strikes to firing beams of light or summoning the spirits of the fallen to fight for you. Many of these skills will be familiar to frequent RPG players, and allows for some awesome skill combos to be pulled off right from the start. 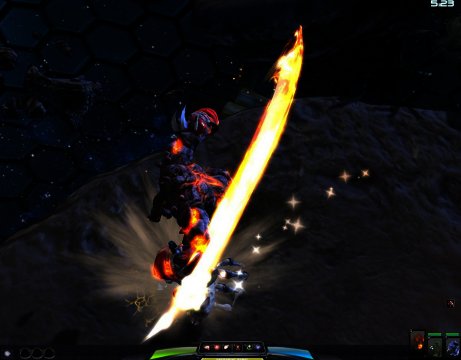 In its 2008 title Spore, Maxis promised gamers the chance to create their own life form and nurture it from amoeba to space faring civilization. While the ambitious title managed to do a couple of things right, it was ultimately relegated to a footnote in gaming history since it couldn't yet offer the complexity gamers yearned from each of its different stages.

One thing the game got spot on though was its brilliant creature creator, enabling players to create exotic and absolutely insane creatures from scratch. And it's this aspect which has been incorporated heavily into Darkspore, allowing players to outfit and customise their heroes to a degree few other games allow.

Unfortunately the game doesn't allow you to create a creature quite from scratch, although it does offer up 25 different pre-built monstrosities to unlock and play with, each with four variations and sporting markedly different appearances and skillsets.

Customisation comes into the picture when you're equipping different pieces of loot to your creature, allowing players to stick extra eyes and tentacles or energy claws and pieces of circuitry to their heroes. You're able to manipulate the size and shape of these parts to a large extent, so one piece of loot could be formed into armoured knee pads or a triceratops' headcrest, depending on what you wanted to do with it.

Some pieces of loot can be edited more than others, but these pieces are usually things like light-swords, lances and electro claws, which are appealing in their own ways.

One of the game’s unique aspects comes into play once you finish a mission, with players able to either take their earned XP and items and head back to reequip, or immediately reembark on the next mission with the possibility of earning an even better reward. Choosing this however means that if you happen to die during the challenge you’ll lose all the items you earned initially. This weighing of the odds adds another layer to the game, and beating two or three consecutive levels is a great experience, with insane boss battles taking place as the difficulty rises. 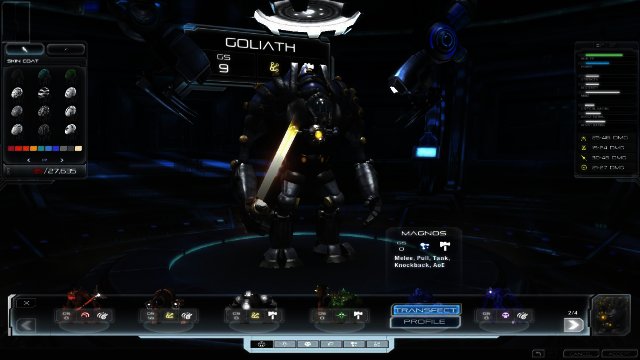 Another aspect which sets Darkspore apart from the crowd is its online capabilities, and players should note that the game is an online-only title. While the campaign can be enjoyed by yourself, players are automatically signed into a shared lobby upon entering the game, with a large chat window enabling communication with fellow players.

Players can engage in co-op combat either by creating their own custom teams, or by simply clicking on the 'matchmaker' icon when starting any campaign mission. This will search for players of a similar skill level to match you up with, making the enemies stronger but also giving both players higher experience bonuses as well as raising the possibility of acquiring rare items.

We were easily able to find fellow players using the system, and co-op gameplay proved itself to be an enjoyable and lag-free experience. Taking on the Darkspore with other players is simply a joy, and up to four of you can battle together simultaneously.

If you prefer a more competitive edge to your online gameplay Darkspore also supports a PvP mode, in which either 1v1 or 2v2 battles can be fought against other players. Although we would've liked to see support for more players, duelling it out directly can be a highly challenging affair, and the level of skill and hero knowledge required to truly excel will ensure hardcore players are kept occupied for hours. 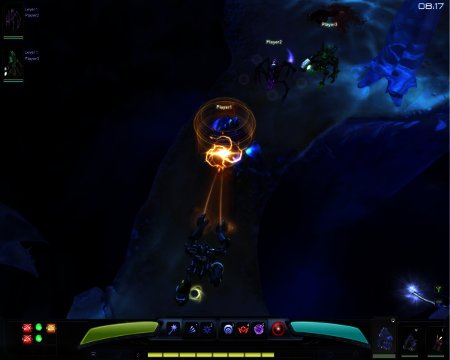 While Darkspore isn't the most visually impressive game on the calendar, it definitely sports a unique sci-fi style, something which is rarely seen in the fantasy dominated world of RPGs. Its quirky creatures draw resemblances from Spore, but are much grittier and deadly looking.

Character movement, especially for long-legged heroes like Arakna, looks really good, with its spidery legs moving in a dynamic and realistic way. In general character animation, and also the bright and loud explosions and effects found throughout the game appeared vivid and appealing.

Some of the levels were less impressive than others, with dramatic sky bridges sometimes giving way to identical looking platforms and mountainsides.

Controlling our characters was a very snappy and accurate affair, with useful hotkeys making gameplay that much smoother. Some aspects outside of battle could be improved though, with inventory management becoming a bit of a hassle when acquiring loads of items. 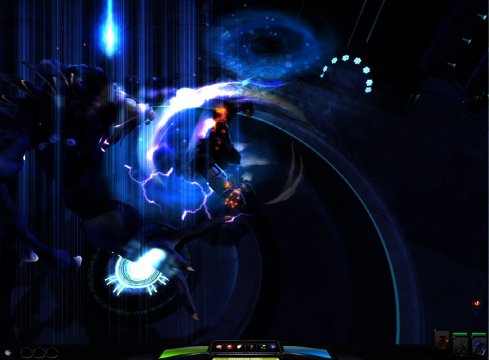 From first glance Darkspore might appear to be another generic RPG attempt, but in actual fact the game hits the sweet spot when it comes to addictive gameplay mechanics. You'd be surprised how enjoyable co-op space looting can be, and spending time crafting your heroes' to perfection in the editor can only be described as a labour of love.

PROS
Stunning enemies with Zrin, then pulverizing them with Goliath''s energy beam and finally stealing their souls with Arakna. Building a team that compliments each other is lots of fun.

CONS
A few bugs, such as unresponsive clicking crop up now and then.
TAGS:
darksporemaxisRPGdiablothe simssim city
USER COMMENTS