Being one of the gaming world's staples, first person shooters aren't in short supply at the moment. As a result, these titles need to stand out from the pack if they want to achieve any kind of success, the question is, does Medal of Honor achieve this and is there enough room on the boat for one more?

Story
The Medal of Honor (MOH) name will be familiar to any first person shooter veterans, the series dominated the FPS world in the early part of the decade with excellent titles such as Medal of Honor: Allied Assault setting the bar high as the Call of Duty of its time.
In 2010 however EA decided to try and reboot the MOH franchise by moving it from its traditional World War 2 setting to focus on the conflict in modern day Afghanistan. The switch may not sound so rare, but it's actually one of the few games which takes place next to an actual real world military conflict. This is also the reason the game attracted controversy earlier in development which culminated in EA deciding to rename the Taliban faction in multiplayer to simply Opposing Force.
The story itself revolves for the most part around a group of Tier 1 operators, army special forces that execute sensitive operations which are never mentioned in official military documentation. In addition to fighting alongside the Tier 1 operators, players will also fight as an army grunt as part of the US Army Rangers as they battle the Taliban in the rocky crevices of Afghanistan.
The story and characters didn't really strike us as particularly exciting, with the typical American ‘hoo-hah’ brand of one sided ass kicking we've come to expect from Hollywood action films.
Some of the missions in the campaign were enjoyable, but for the most part it was a “did this, done that” approach that mirrored contemporaries such as Call of Duty. Some of the missions included staples such as designating targets for air support, participating in long range Taliban sniping sessions and generally running around and shooting at turban headed folks as they pop up from cover. 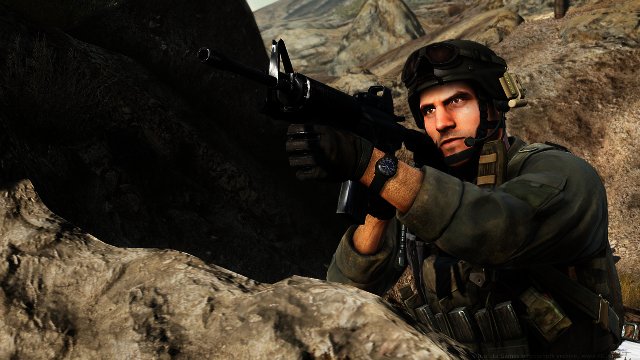 Popping up from cover, as demonstrated by a non turban wearing ally.
Scripting gone bad
One of MOH's most telling flaws was its scripted sequences, originally designed to enhance immersion and make you feel like you're part of a story. In reality they mostly detract from this experience. On several occasions we were left running around looking for an invisible checkpoint before the game would move on to the next sequence of events.
For the majority of these sequences the player doesn't have control of their character either as they run around and shout army jargon at each other. If this was the first time these sequences were attempted they would have been groundbreaking, but unfortunately in MOH’s case the competition just nails it better than they do. 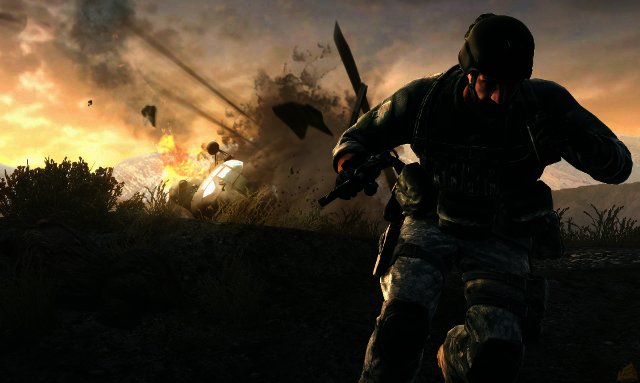 Private Janson demonstrating helicopter safety tactic 101, running away from the helicopter.
Gameplay
Gameplay wise the tile performed as one would expect, mirroring the basic FPS control layout button for button as you switch weapons, throw grenades and run around the map. Developers Danger Close did include a few exciting aspects such as sliding into cover, but unfortunately these aren't available in multiplayer.
Something which struck us about the game was the difficulty settings. For our first play-through we decided to try and tackle the game on hard difficulty; we expected quite a fight but a combination of daft AI and ludicrous amounts of ammo made it exceedingly easy, so easy in fact that out of frustration we decided to play through the first half of the game using only a pistol (which quite handily came with infinite ammo).
The game did ramp up the difficulty as we proceeded, but the infinitely spawning enemies made it feel more like a chore than a challenge. As longer range fights approached we were forced to holster our trusty pistol in lieu of a more fitting firearm.
One of the things that Medal of Honor excelled at was weapon authenticity and feel, each gun being meticulously crafted to resemble its real life counterpart. The weapons sport impressively realistic sound effects as each bullet thuds pleasingly into whatever it is you're aiming at. Realistic recoil and alternative firing modes on some weapons also helped add to the authenticity of the gun roster.
For the most part the guns are a great part of MOH, only disappointing us during the long range sniping mission. Anyone who has played Modern Warfare will know this one, with a spotter and shooter (you are the shooter) laying down sniper fire on unsuspecting insurgents located on a neighbouring hill. When the time came we carefully zoomed in, waited for the right moment, held our breath and fired, this first test confirmed our suspicions as the enemy's head flew apart, that realistic bullet physics were strangely absent, at least over long ranges.
In FPS titles with this feature included the round would actually slowly fall as it loses velocity, causing you to aim slightly above the enemy's heads to compensate. In MOH however each time we centred our scope on an enemies head the bullet landed exactly where we pointed. Now this may sound like nitpicking, but for a game that sells itself as a “realistic military shooter”, missing out on this element isn't ideal.
A moment we particularly enjoyed in the campaign however was when we needed to assault a Taliban machine gun nest stationed on a defended hill. Normally FPS games would have the player leading the assault, flanking the enemy in a dazzling display of solo gunmanship or finding some special weapon to take out the position with. Instead our platoon sergeant (or whatever rank applies to Tier 1 guys) ordered us to take cover and provide covering fire with our light machine gun as our allies stormed the position. This may sound boring to some, but just deviating from the norm that little bit turned the experience into something great.
We happily obliged, hurling round after round at the enemy position and joyously watching as specks of dust shot up every time we peppered the position, forcing the enemy to duck and cover as our boys advanced on them.
Apart from this there are a few moments in the MOH campaign which are quite enjoyable, and you can get sucked into the fast paced action quite quickly, our only concern is that we've done it all before, making the experience exceptionally bland. 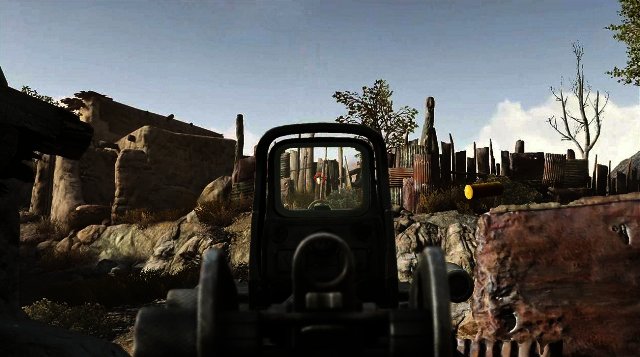 Weapons look and react wonderfully.
Presentation
In a departure from the norm, Medal of Honor actually makes use of two completely different engines to render the game. The popular Unreal Engine 3 enabled Danger Close to take care of the single player campaign, while the Frostbite engine from DICE (developers of Battlefield), took over on the multiplayer side.
During the campaign the U3 engine once again proved itself as an industry benchmark, providing good levels of lighting as well as quality effects into the package. The game looks much more beautiful in daytime than at night though, with the sun and shadows creating pleasing effects which may cause you to stop and admire the scenery for a while. Go on, you deserved it.
Apart from one or two stuck objects the engine performed well and will provide a generally pleasing, but not astounding, graphical experience. 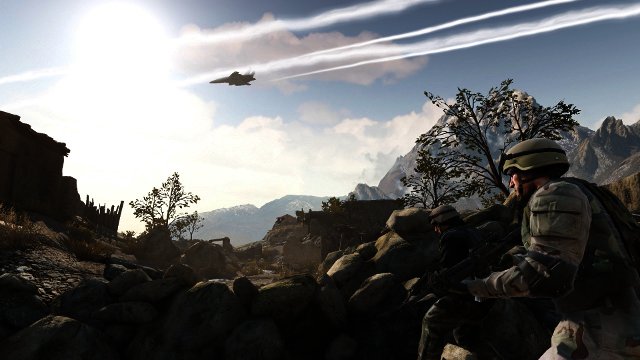 A couple of moments like these will leave you marveling at the scenery.
Multiplayer
DICE developed the multiplayer side of the game utilising the Frostbite engine to adequately recreate the maps and fast paced action of the multiplayer. Unfortunately the awesome destructible environments from Bad Company 2 did not make an appearance, a sorely missed feature.
There are four game modes available in multiplayer: Team Assault, Sector Control, Objective Raid and Combat Mission. Combat Mission showed the most promise as it was something different to the tried and tested multiplayer gunplay, with large maps of objective filled fun that can make for some good teamplay.
In multiplayer you have three different classes to choose from, rifleman, spec ops or sniper, each outfitted with unique weapons and kit. Players earn experience points as they progress through battles, unlocking new weapons and gadgets. You also have access to “perks” in multiplayer such as calling in missile or mortar strikes to soften your enemies.
Unfortunately only eight maps are currently available, but this should be remedied soon. For all other purposes the multiplayer provides a mixed bag of online fun, but is enjoyable for the most part. One thing we should warn about though, be prepared to face some snipers. 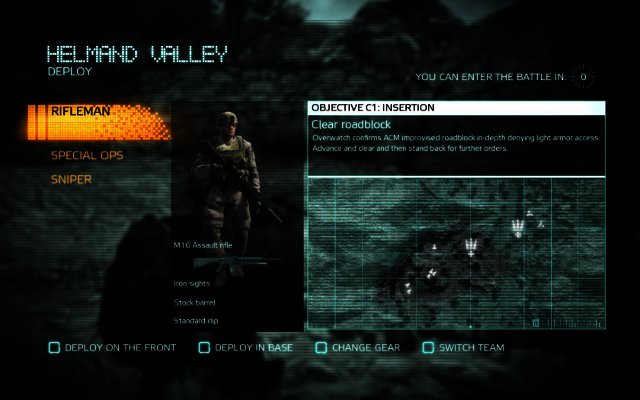 Unfortunately, no awesome medic defibrillator kills this time around.
Conclusion
Medal of Honor ticks all the boxes when it comes to the modern FPS recipe, it has all the sequences you'd expect, missile targeting, sniping, scripted melee sequences and all that jazz but somehow it just ends up feeling unoriginal. It's not a terrible game, it just feels like we've seen it all before, and that makes Medal of Honor a pretty bland experience. Still, not a bad buy if you enjoy your military FPS's.

PROS
Authentic weapons with realistic recoil and pleasing audio adds to the immersion.

CONS
Silly AI and minor graphical hitches annoy, but it's the fact that the game doesn't bring anything new to the party that disappointed the most.
TAGS:
medal of honorEADanger CloseDICEcall of dutybattlefield bad company 2
USER COMMENTS