The original Portal was the biggest sleeper hit of 2007, with the surprisingly popular game going on to win several awards, including a number of major Game of the Year titles. The game seemingly came out of nowhere, and wasn't even sold on its own initially, instead being bundled as an extra with Valve's Orange Box.

With its unique style of gameplay, quirky characters and hilarious moments, Portal quickly embedded itself in the collective gamer consciousness as one of the most beloved games of all time. And now Valve is bringing us back to the testing chambers in Portal 2, with new characters, new puzzles and new science awaiting us. 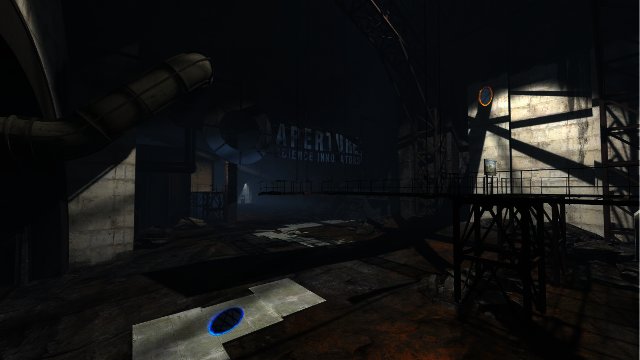 In Portal 2 players once again take on the role of Chell, who must by now feel like the world's most overworked lab rat. Continuing from the dramatic ending of the first game, we find ourselves waking up in the bowels of Aperture Laboratories once more.

Luckily for us Aperture's sinister AI caretaker GLaDOS has been taken care of (Portal 1), but unluckily this also means that the facility has fallen into a state of disrepair in the intervening time. As we're awakened in our sparsely furnished cubicle by the automated voice of Aperture founder, Cave Johnson, Portal's subtle and witty humour immediately makes itself felt.

Soon however we're discovered by Wheatley, a bungling AI who it seems was responsible for keeping the company's test subjects alive. Wheatley is the exact opposite of GLaDOS, with the friendly little blue ball excitedly chattering away as he helped to extract us out of our crumbling cubicle. Voice by British actor Stephen Merchant (co-writer and co-star British comedies The Office and Extras), Wheatley is one of the quirkiest and silliest robots you'll ever meet, and seemed to be our only saviour in the maze that is Aperture Science.

After being guided around by Wheatley for a bit we came across one of the most powerful guns in gaming history, the infamous Aperture Science Portal gun, which will be discussed in more detail soon. After playing around with some of the basic mechanics of portals, Wheatley accidentally reactivates GLaDOS in a failed attempt to escape from the facility.

As her huge mechanical body slowly rises from the rubble strewn floor, debris crashing down everywhere, we see GLaDOS slowly turning her gaze on us, and as her iconic robotic voice chimed in for the first time we felt goosebumps spreading across the back of our neck. As GLaDOS quickly retook control of the facility the terrified Wheatley flees for his life, and we're left to take on her tests alone, with not even a companion cube for comfort. 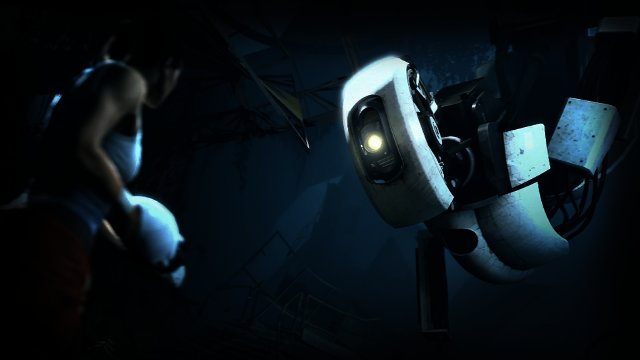 Portal 2 continues in its predecessors footsteps with its innovative use of portals, with the Portal gun capable of firing (placing) two interlinked portals on certain surfaces. These "gateways" if you will allows players to move themselves and objects in the game world between them.

For example, imagine you're in a square room, you place a portal in front of you and a portal behind, when you walk through the first portal you come out through the back of the room. This may sound very basic, but this mechanic allows players to traverse otherwise impassable drops and large distances, and since they retain momentum portals can also be used to launch a user through the air at high speed.

The portal gun is your sole armament throughout the game, but it's by far the most useful, and arguably the most powerful gun in gaming history. And once you and your portal gun are introduced to the game's mind bending test chambers and all their variables, you'll be surprised at the innovative ways you can find to use it.

Unfortunately the iconic companion cube makes only a brief cameo appearance this time around, but placing cubes on pressure pads, to keep doors open for example, is still a big part of gameplay. The first game's adorable yet lethal turret bots also return, prepared to pump you full of lead in some of the more dangerous tests, innocently asking, "are you still there?", after having shot at you mere seconds ago. 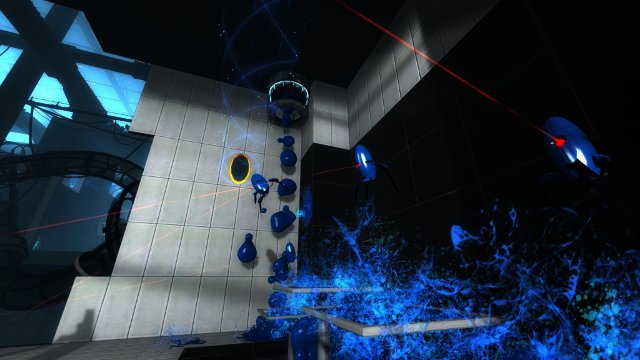 Things can get a tad... out of hand sometimes.
Now with lasers

A ton of other variables appear throughout Portal 2, most of them brand new. A number of puzzles now require players to redirect laser beams (thermal discouragement beams), using a refractive cube outfitted with mirrors. While most of the time players will have to aim the beam to activate a certain switch, the refractive cube is also the only true offensive weapon in the game, with players using precise movements to blast away chattering turrets.

Light bridges are also introduced, allowing players to manipulate them (with the power of portals) to traverse bottomless pits and other dangers. Another surprising use for light bridges can be as mid-air barriers, for example in one level players have to vault themselves across a chamber, quickly placing a portal in mid-air to allow a light bridge to block your fall. Cylindrical tractor beams are also on offer, propelling the player or any object you place within it in a certain direction, even vertically.

In addition to this Portal 2 also introduces fun with liquids, with a number of colourful globular gels available. For example, a blue bouncy gel allows players to jump tremendous distances, while a speedy orange gel lets you run faster than Usain Bolt.

Part of the puzzle also comes from manipulating these gels in your environment, using portals and tractor beams to transport the hypnotically twirling liquid across test chambers. This particular mechanic can get a tad frustrating at times though, with players for example having to use portals to paint part of a ramp with orange gel, while colouring the tip with blue gel so as to create a physics defying running-start gel-based human catapult. And while it's just as satisfying when you finally complete the puzzle, painting ramps using portals and free falling liquids isn't exactly a precise science. 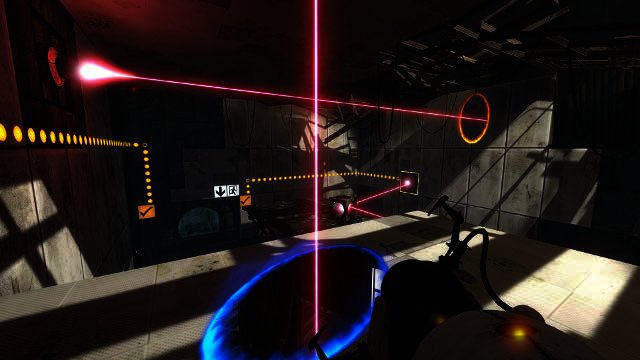 Portal 2 also teaches us that lasers doesn't necessarily need to be blowing things up to be useful.
Presentation and scope

Valve's Source engine, first introduced with 2004's Half Life 2 does a great job of directing all the on-screen action, once again showcasing its remarkable control of physics as parts of levels break open realistically and we fling objects and ourselves across chambers at blistering speeds.

While the game doesn't feature the most breathtaking graphics in the industry, Valve has nevertheless managed to update the engine to stand toe to toe with this year's major titles. The levels look crisper and clearer, extra details can be seen everywhere and the game is a much more colourful beast than its predecessor, introducing players to a variety of different environments, from pristine testing chambers to underground sewers and the old abandoned parts of Aperture Laboratories (which, by the way, is much more massive than we ever imagined).

On that note, Portal 2's scope is absolutely huge compared to the first game. While the original had only 19 test chambers and one end battle, capable of being completed in two to three hours, Portal 2 will keep you scratching your noggin for a good ten hours (depending of course on how good you are at puzzle solving).

And unlike many other games on the market today, Portal 2 excels in delivering witty, sarcastic and all around magnificent dialogue, even though the player is surrounded only by robots and pre-recorded voices. While GlaDOS would subtly taunt players in the first game, in Portal 2 she makes outright death threats and muses about how you're going to spend the rest of your days in the facility. At other times she taunts you by telling stories of the outside world, and at yet other times she simply calls you fat.

It’s also clear that the developers put a lot of polish into the game, with subtle things like distinct sounds playing when you’re being propelled by a tractor beam or sprinting across orange gel adding that much more to the experience. 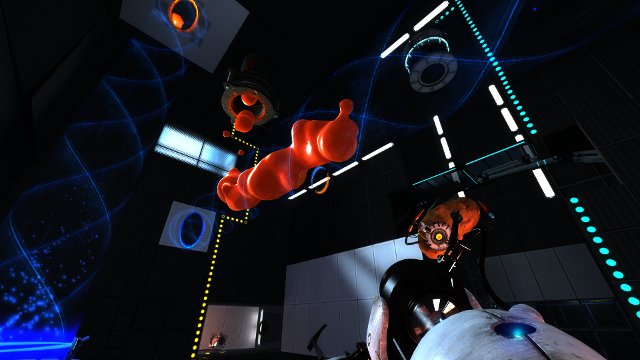 This mesmerizing sight demonstrates the wonderful physics of the Source engine.
Co-op

And even when you've completed the exhilarating campaign, complete with more unexpected twists and turns than you could imagine, Portal 2 keeps going, delivering a full co-op mode to boot. In this mode players experience a different (yet somewhat related) storyline as they take on the role of two Aperture Science robots, P-Body and Atlas.

Once again GLaDOS' serene computer voice will be guiding you through test chambers, however this time around she has in general a much friendlier approach to her fellow robots (though this still isn't saying much).

It's recommended that you play this mode with a friend, although an AI companion is also available. The game is much easier to play when you have a mic or headset to verbally communicate with your partner as well, although a number of useful mechanics, such as pointing out certain features in a chamber by "pinging", allows your friend to see what you're talking about. A picture in picture mode is also available, allowing you to see exactly what your partner is doing by displaying their view in an overlayed window, something which greatly helps in navigating some of the more difficult puzzles. 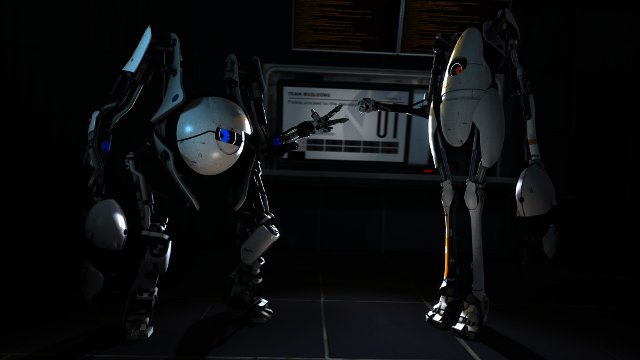 "Unlike humans, robots don't need to be taught how to work together." - GLaDOS
Also cross platform with the PS3

In addition to this co-op mode, Valve has also created a cross platform experience by extending its Steam service to the PlayStation 3. PS3 users can make use of a simple in-game menu to log into your Steam account through your PS3 (or create a new one), upon which you'll be able to access your Steam friends list just like on the PC.

Apart from a slightly longer than usual loading time, things proceeded smoothly, finally allowing PC and PS3 players into the same game instance. It definitely adds a lot of possibilities for co-op, especially if some of your friends are PS3 fanboys and you happen to prefer the PC, or vice versa. 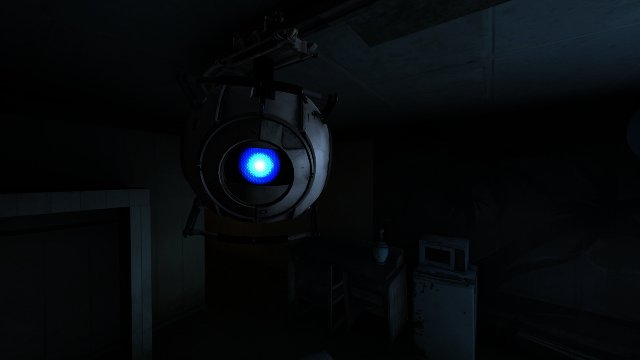 Portal 2 is a game quite unlike any other out there, offering players a glimpse at that hard-to-define "essence" of gaming. There aren't any mindless shooting sprees, burly space marines or overused clichés here, instead Portal 2 eloquently delivers a sophisticated mix of addictive mechanics, innovative gameplay, witty banter and of course mind-bending puzzles, requiring you to dust off and use your brain for a bit.

The game also amazingly manages to tell a thoroughly more intriguing story using robots and automated voices than many other games manages with full human casts. An absolutely hilarious and riveting experience, Portal 2 is something that can be enjoyed by gaming veterans and can also serve as a great intro to gaming for those who have yet to take the leap.

PROS
Melting turrets with lasers and getting flying starts off goo covered ramps, while placing portals in mid air to fling you across levels gives a sense of satisfaction other games can only dream off.