An adrenalin packed action overload
8.5    Gameplay
7.5    Story
8.5    Presentation
9.0    Lasting appeal
4
It has become almost a fait accompli that the end of another year brings certain things – the festive season, holiday plans, a respite from work – and another instalment in the Call of Duty franchise.
In a way, it is this generation’s James Bond – you always knew James Bond would come with implausible action, mouth-watering gadgets and at least one gorgeous woman.
In a similar vein, you know what to expect with Call of Duty – over the top action, superlative combat, a bit of a muddled story and ultimately a game that will sell millions of copies.
Predictable as its elements may be, that does not mean the game series has lost any of its appeal; in fact, by this point you also anticipate that the developers really know what they’re doing – and it shows. 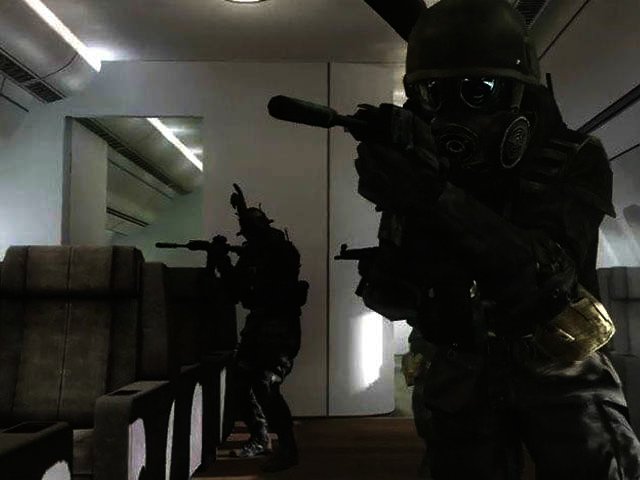 "Mr Baldwin, American Airlines would like to have a word with you..." *
Storyline
Modern Warfare 3 starts off by throwing you into the thick of the action, picking up where MW2 left off. You begin the game on the brink of death – and then your predicament gets really bad. The US is in the thick of war with a Russian menace which has its sights set on starting World War 3.
The story is told from a variety of perspectives, each of which has a role to play in the conflict. This variety is a double edged sword. While we enjoyed flipping between playing as a SEAL, our Russian ally, a presidential bodyguard, and British forces, amongst others, it also meant that we didn’t get to develop a particularly strong emotional connection with any of the characters.
Gameplay dynamics
Fans of warfare titles will be happy to know that the action is often unrelenting, at times even exhilarating. This is heightened by silky smooth gameplay dynamics. These included picking up and firing a variety of weapons, aiming, strategically using grenades and reloading and taking frequent and essential advantage of cover.
However, the game’s most stellar highlights in our opinion come from its action sequencess, that have been and continue the Modern Warfare’s legacy of being some of the strongest aspects of the franchise. These boast levels of finely tuned mayhem that could have come straight from Michael Bay’s Guide to Destruction. 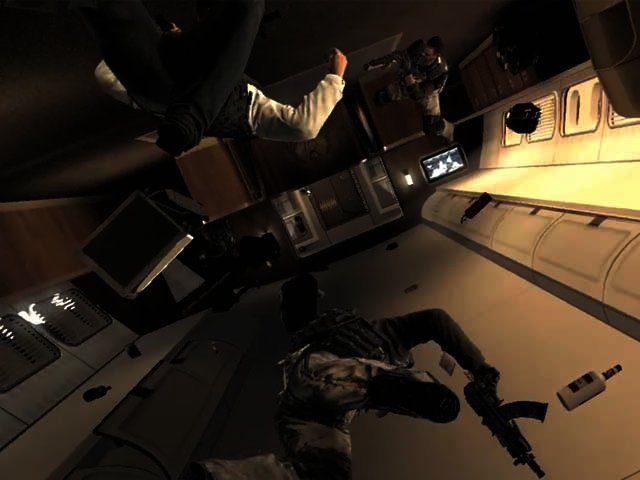 "This is why we insist you fasten your seatbelt and switch off your cellphone
during takeoff."
Two particular standout moments included sabotaging a Russian submarine underwater, and then manning a speedboat to escape our predicament, another entailed protecting the president of Russia, which culminated in a fight for our lives while the airplane broke apart around us.
And then there was that runaway train which makes the Gautrain’s issues pale in comparison....
World in ruin
As you would expect from the franchise, the production levels are top notch, with the level of graphical detail and high quality audio in particular worthy of praise.
Additionally, the numerous weapons which litter the battlefield felt visceral and weighty; for example reloading your weapon perfectly reflects the accompanying sense of urgency while bullets fly all around you, as the new clip is forcefully jammed into place – as it would be if you were in an actual warzone.
Character animations were also fluid and immersive, whether scrambling for hold on a disintegrating plane, climbing a ladder or picking yourself up from the ground, none felt jarring or pulled us out of the experience. 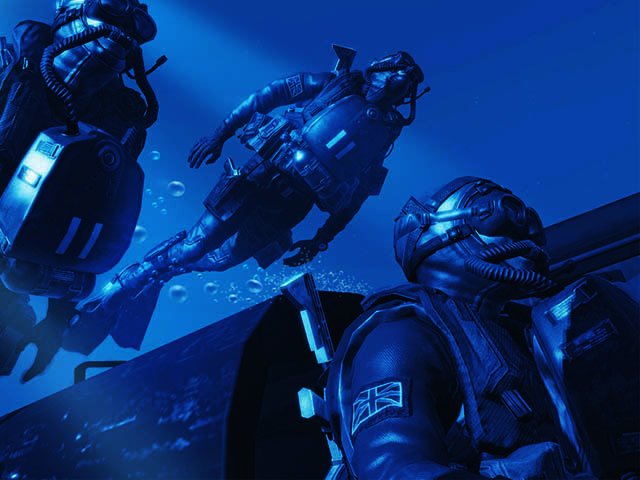 "If the plane were to crash, we hope you are able to swim as well as these guys."
Weakest Link
As strong as it is, Modern Warfare 3 is not without its flaws. The main one was the game’s characterisation. The problem is, without an emotional connection to one’s own character and teammates around, we found ourselves less invested in the unfoldment of the game’s story than we would have liked. Perhaps we’ve just been spoilt by the likes of Uncharted 3 and Resistance 3 in this regard.
The other issue that was most noticeable at the beginning was pacing, with one frenetic round of frenzied action being followed too closely by another, and another. This actually started to numb us to the impact of each after a while. Thankfully, it did improve after a few missions, punctuating fire fights with some more stealth orientated sections.
Ironically, for a bestselling title, a recent report found that less than 50% of the game’s players actually finish the campaign, instead opting for multiplayer. This is a pity actually, because the despite its flaws, Modern Warfare 3 still offers a very solid campaign, which we enjoyed more as we progressed. Unlike that of Battlefield 3. 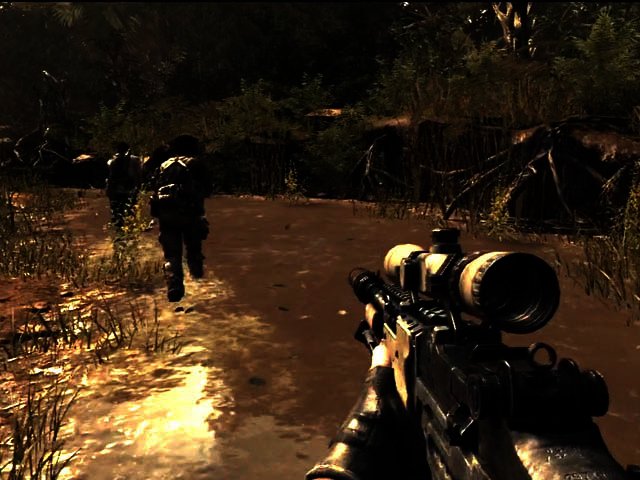 "If you force us to divert, we hear the mosquitoes in Africa are really big, and quite deadly."
Multiplayer mayhem
Nonetheless, we are fully aware that for many gamers, single player is only part of the package, while for others multiplayer is where Modern Warfare 3’s true appeal lies. Firstly though, the game offers a variety of briefer Special Ops levels, which you can either play alone – and return to as often as you like in an attempt to beat your best time – or play co-operatively with a friend in split screen mode or online.
These come in two flavours, mission mode, in which you have to complete objectives based on the game’s campaign, and survival mode, where waves of enemies are thrown at you in a variety of locales.
Both are loads of fun – we found each kept us coming back for more, and particularly enjoyed the fact that we could immerse ourselves in a brief 10 minutes of intense play when we didn’t have enough time for a longer gaming session. Better yet, as you play you unlock more weapons, which only makes surviving Special Ops that much more fun.
Additionally, none of our issues with the campaign had any bearing, which only accentuated the game’s strengths (superbly smooth controls, frantic combat and terrific action). Multiplayer mode is similarly a very strong offering, enabling one to select from several classes, such as grenadier, first recon, first watch, scout sniper (our favourite) and riot control. Each has their strengths, which made committing to one class a difficult choice for all the right reasons.
Grenadiers, for example, can garner ammo from dead enemies and carry two primary weapons, while the first recon class can take advantage of faster aiming and move more stealthily. Whereas Overwatch can’t be detected by air support and sentries, and has greater resistance to explosives (being ‘grenaded’ is just not fun), the scout sniper can sprint further and identify targets at long range. Additionally, the riot control class can enjoy fast reloading and move more quickly while aiming. Each of these has their appeal, and offers up something for a variety of styles of play. 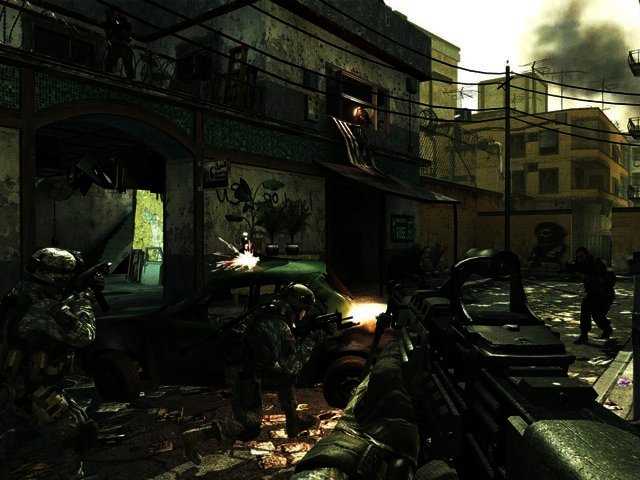 "We hope you enjoyed the fight, er, flight, as much as we did."
Modes on offer include the familiar Team Deathmatch and Free for all, along with search and destroy. Additionally, the new Kill Confirmed mode, in which you have to collect defeated players’ dog tags, and capture the flag-like Team Defender, in which teams have to retain their flag, are also available.
Is MW3’s multi-player better than that of Battlefield 3’s? That, and other perplexing questions, like who would win in a fight between God of War 3’s Kratos or Arkham City’s Batman, and how can people seriously watch Twilight, we will leave up to you to debate.
To the point
Suffice to say, as an overall package, Modern Warfare 3 has plenty on offer and is extremely well polished, a game that quite literally blew us away in many respects. For its detractors who accuse it of being more of the same, we can only say more of excellent quality, exhilarating action and superlative combat is something we can only readily welcome and look forward to next year.
It may not have beaten Skyrim to take first honours as the most played game of the year, but MW3 certainly holds its own with some of the best titles released this year. For action and first person shooter fans, it’s a must-play. 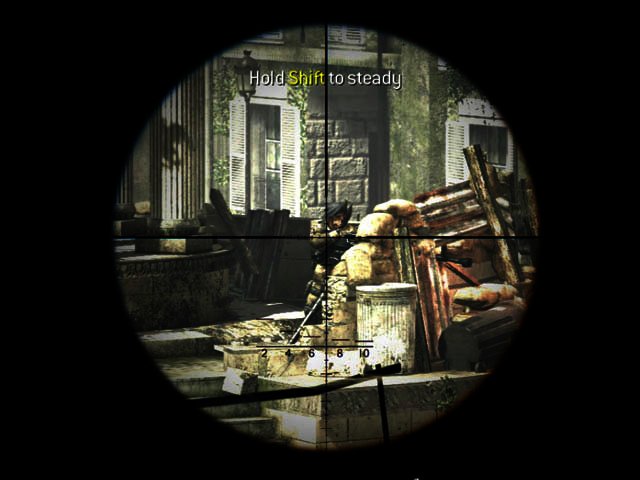 * Earlier this month, actor Alec Baldwin was kicked off an American Airline flight after refusing to stop playing Words with Friends, slamming the bathroom door and locking himself in ahead of takeoff. He then took to Twitter and Saturday Night Live to slam American Airlines. If only he had played Modern Warfare 3, he may have had a better outlet for his pent up aggression.