Clash of the Titans

The game is your standard hack and slash title, which if done right can make for a great game, but unfortunately developers Game Republic got the recipe horribly mixed up by seemingly trying to copy elements from various other games into Clash of the Titans.
Playing through the levels it's easy to see God of War and Prince of Persia influences, but where those games shined in their respective segments, Clash of the Titans will bore you to stone quicker than a glance from Medusa herself.
Story
The game's plot roughly follows that of the film, with the player stepping into the sandals of Perseus, a Greek demigod and illegitimate son of Zeus, who wants to take revenge on the Gods for terrorising his homeland.
The game includes all the battles you want to fight (Hades, Medusa, giant scorpions) in addition to ones you don't, such as gathering fish. All the quests in the game also plays off in a very linear fashion, tasking the player with cutting through strings of cloned enemies. Even the fishing mission has you slogging through enemy ranks only to find a dead fish at the end of the level.
Missions in the game are awarded to the player via a perplexing quest system. The reason we say it's perplexing is because you have the option to either accept or decline quests, although more often than not you can't progress in the game at all if you don't accept, so we're not too sure why the decline option was included in the first place. It's not like exploring the world is an exhilarating affair, you'll encounter more dead ends than anything else if you try and run around a bit.
The game is filled with a host of levels that has nothing to do with the movie, leading to the suspicion that the developers simply included these to prolong game time. 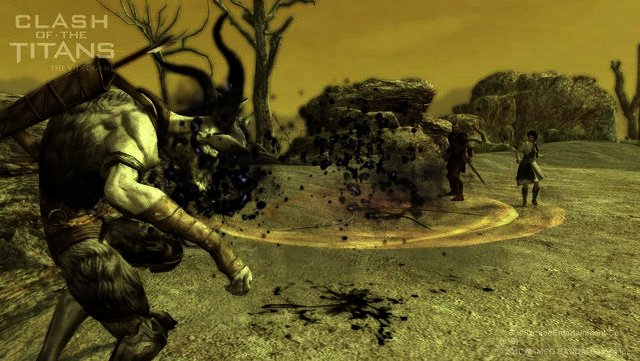 Combat system
The aspect that detracts the most from the Clash of the Titans experience is its combat system, which for a hack and slash title is basically the game's bread and butter.
Firstly, combat is made ridiculously simply, with the game giving players a whopping two different basic attacks to choose from, a quick and a heavy attack. Once the slashing begins it's button bashing from start to finish. Making it worse is that your enemies is so easy and outright stupid in some stages that dispatching them was never much of a challenge.
Certain enemy types require specific weapons to deal damage to them, which adds a tad of variety to the otherwise one sided sword swinging. Players can also seize enemy's weapons when their health reaches a certain level by starting a quick time event known as Sub Weapon Seize. This allows you to press combinations of buttons and if executed correctly Perseus will grab the enemy weapon and dispatch of them in an animation that you better get used to watching over and over and over again. Quick time events also serve to deliver the killing blow in boss fights.
Perseus can also steal the souls of certain enemies to power up his special attacks. This is done by carefully watching as the enemy character model changes colour. Red means you can't attempt the move just yet while shades of blue indicates enemies with lower health, ready to be picked off for some extra energy.
Players can upgrade their weapons through collecting items dropped by fallen enemies, but these upgrades never propel your weapons above its basic light and heavy attack capabilities, it doesn't matter whether you're wielding a sword or a demon's hammer. 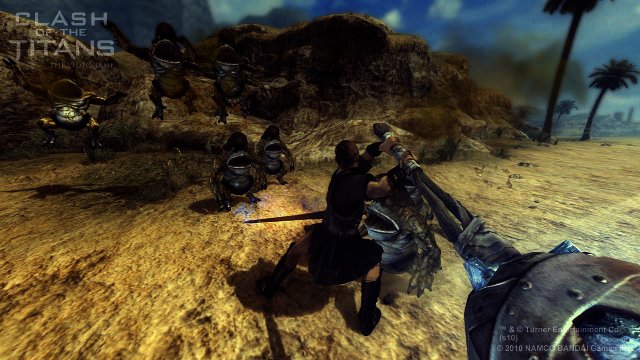 Presentation
The game's graphics are below par and looks shockingly bland compared to higher quality titles, something which really plays a role in the high definition console market. Enemies are merely cloned replicas of each other, the terrain and textures feels dull and devoid of colour and even the character models seem to lack polish.
Voice acting in the game, which while pretty horrible, was still probably a tad better than Sam Worthington's authentic “Australian meets Ancient Greek” accent from the movie, so that's a bonus, we guess.
Glitchy camera controls also helped detract from the overall enjoyment, and this becomes even worse when you try to add another player to the game in co-op mode.
Conclusion
Clash of the Titans comes across as a boring and uninspired title created solely to milk some more cash from the movie tie-in. If you like low quality hack and slash titles that requires no extra thinking or even rudimentary puzzle solving, then this game will deliver. For anyone looking for a decent video game investment though we'd recommend steering clear of this mythological quagmire of stunted lines and endlessly spawning skeletons.
Pro: You get to slash at a bunch of monsters.
Con: Everything else.

PROS
You get to slash at a bunch of monsters