While American football may not be the most popular sport anywhere outside of the United States, EA sports’ series of NFL football games have been able to draw fans to the series from all corners.

As South Africans we know rugby, cricket and soccer pretty well, but the rules of American football have gone over most of our heads. The bottom line is if you haven’t watched American football or played EA Sport’s Madden titles before, Madden 11 will be confusing.

The game starts off with the usual round of inspiring quotes and cutscenes aimed at pumping up would-be armchair NFL stars. After this you are taken to the menu screen, which to our consternation featured a ‘play now’ option immediately taking you to either an exhibition match, Superbowl or AFL league game. No tutorial option, no set of instructions, leaving us clueless as to what exactly to do with the pigskin.

Eventually we found a ‘practice’ mode down in the belly of the game modes section of the menu, this however didn’t help much either as instructions were still missing, it’s the same as the normal game just without the huge crowds and constant penalties. A ‘virtual trainer’ mode is also available, but the differences between this calm mode and the main game is like day and night.

There were vague hints that popped up on screen every once in a while, plus the game manual does feature a list of commands and controls, but trying to memorize this is quite strenuous. All we can say to new players is good luck. The game is playable, it just takes some practice. 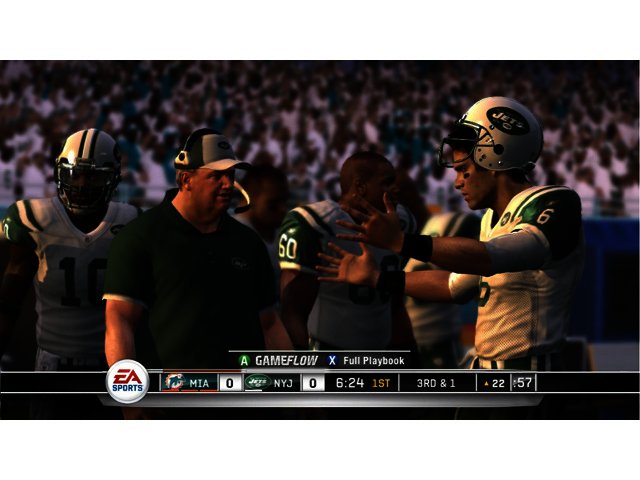 The controls proved challenging, but not impossible and we spent our first few games watching the players humorously scramble around the field like a bunch of confused chickens.

The game itself is controlled by using a dual stick control layout, all this means is that running, breaking tackles and so forth are controlled by moving the control sticks to swerve and dodge enemy players while trying to keep as straight as possible a line towards the enemy touchdown zone.

Selecting different players and plays is achieved by pressing the various corresponding buttons. Players can briefly zoom out to look at the field and when doing this different buttons will appear above players heads. To give an example, you may press ‘A’ to select to pass to a runner upfield and ‘B’ or ‘Y’ to pass to other players. As we’ve mentioned before, it takes some getting used to, but new players simply need to persevere. If you’re really struggling go read the Wikipedia article on American football rules.

After a while things started making sense. The game stops after every play and resets to a new position, a facet quite unfamiliar to rugby mad South Africans. Every time the field reset or a penalty is awarded players are ‘treated’ to a camera pan of the field, a close-up of the coaches scowling, a close-up of the players trying to look intimidating and just generally some atmosphere inducing camera angles. This works well to create the sense of a ‘real’ game but detracts from the core gaming experience. After the third close-up of a football coach looking grumpy we started skipping these pauses altogether.

The only way we could get even a vague idea of what was going on in-between the American accents, Imperial measurements and general football talk was by using the Gameflow mode. Gameflow cuts the standard playing time in half by leaving the coaching to the coach and the playing to you. This reduces the amount of different plays you can make from 350 down to 1, since with Gameflow the best play for your team is automatically selected based on their real-life stats and performance. Simply listen to the coach and start running.

Game Planning is another addition that makes the game easier to get into, this feature allows players to select the types of plays the coach will call beforehand by rating them. The higher they’re rated, the more likely the AI controlled coach is to call for them during the game. 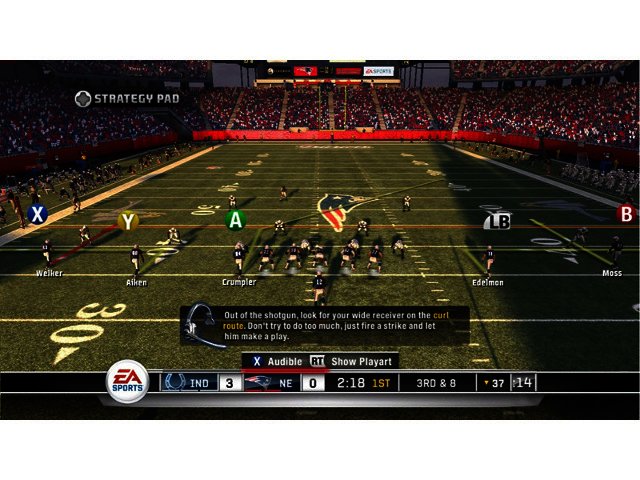 In the latest iteration, the Turbo feature has been removed from the game, meaning your players on the field will now automatically adjust their speed depending on where they are on the field. In the previous games it was possible for a player with the ball mere yards from the touchdown line slowing down or making the wrong moves. Now however he will sprint like no tomorrow if close to the line, something which adds some realism to the game. The enemy players will however also adjust their speed.

We found it exceedingly hard to get past the defenders in the game, even when playing against equally useless human opponents tackling is just so much easier than doing anything useful with the ball.

The strategy pad feature makes things easier, this allows players to pick and switch between plays and hot routes quickly before heading into the fray.

While the game isn’t too strong on welcoming newbies, it does deserve credit for its incredible level of realism and authenticity. The players on the field react naturally and the feeling of getting a good play off the ground or intercepting a pass is unrivalled.

The commentary, although undecipherable at times, sounds exactly like the real deal and small details such as zooming in on the fans, cheerleaders and stalls outside of the stadium adds to the feeling that you’re leading your team in a true NFL showdown.

Commentary in the game is provided by the electric Gus Johnson, the American equivalent of Hugh Bladen. Cris Collinsworth narrates the analysis with authentic team chants and stadium music really bringing the game to life. 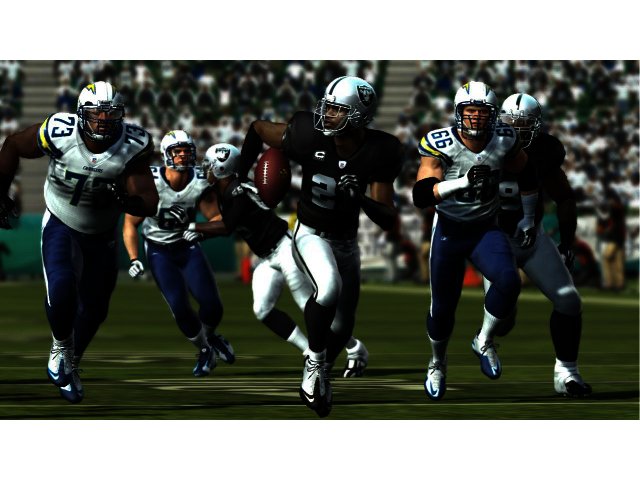 The game may be hard to understand,  but at least the multiplayer wasn’t. We were able to play against human opponents without any hassles in both the offline and online modes and this is really where the game shines.

There are various gameplay options that allows players to select exactly what kind of match they would like to play, and thanks to the balanced nature of the multiplayer even inexperienced players like us are able to keep up a semblance of a game when going up against tougher opponents, even if it is for only a little while.

A nice addition to the multiplayer mode this time around is the Online Team Play option. This allows you to take on your friends (or foes) in 3 versus 3 co-op matches with each player controlling a different section of the team. One player will control the quarterback, one the running backs and the other will manage the receivers.

It’s a mode that promises hours of fun for fans of the sport, taking on other players online with your friends backing you up may just be the holy grail of football games.

While the game may see limited mainstream appeal in South Africa, Madden NFL 11, despite being pretty confusing at first, managed to make an impression on us. The game design and atmosphere are both top quality and really pulls players into the NFL excitement. If you’re a fan of American football, Madden NFL 11 is probably exactly what you should be looking for. Most South Africans though will be wondering when EA Sport’s next incarnation of their Rugby franchise sees the light of day.

PROS
Very good commentary, in-game audio, music and perfectly recreated stadiums gives this game a slice of authenticity that is hard to beat.

CONS
Figuring out the controls if you''re a first timer can take a while, we would have like to see a better tutorial system.
TAGS:
MaddenEA SportsNFL 11footballsports games
USER COMMENTS