HOMEREVIEWSNEWSBUSINESSCONTACTMAGAZINE
You are in: HOME > games > xbox one
PREVIOUS ARTICLENEXT ARTICLE


Rise of the Tomb Raider (Xbox One)

The tomb is deathly quiet, as ice and snow cover sections of the hidden cave. High above me, an unknown treasure looms, as if daring me to brave the slippery ledges and trust that the rusted pendulum dangling beyond my reach will hold my weight. If it doesn’t, my adventure will be quickly cut short by a bloodcurdling scream and a hideously broken neck. Then again, all reward comes with risk, so I leap…

Rise of the Tomb Raider (RotTR) opens in dramatic fashion, with Lara embarking on a daunting ascent up a mountain that instantly reminds of those Everest climbing movies. Unrelenting snow obscures your vision, and fierce wind shrieks around you, as if furious at your impertinence, and you can practically feel the biting cold.

All these elements combine to ensure that the game’s intro is possibly one of the more nail biting sequences I have seen since I saw Nathan Drake hanging off the edge of a derailed train in the opening minutes of Uncharted 2. It took Rise of the Tomb Raider all of ten minutes, but I was hooked.

This is exactly what action adventure games are meant to do - bring you to the edge of your seat, set your heart pounding and captivate your attention. The game starts with a sequence that you could expect to find in the middle of many other action adventure titles, with a set piece that brings new meaning to the words near death experiences. By my count Lara manages to have at least three in the space of the first five minutes. That bright light you see? It’s probably the approaching avalanche. 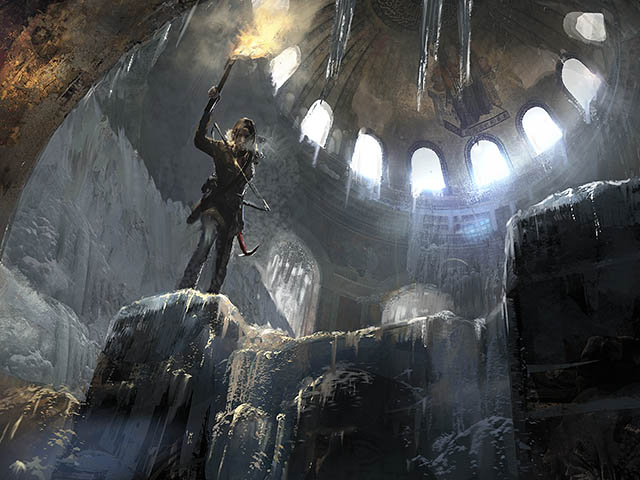 The good news is that it gets even better from there. What is immediately obvious is that this is a much more confident, self assured Lara than the inexperienced young adventurer in the previous game.

Even so, she’s certainly not invulnerable. High up amid ancient temples, rotten wooden beams will break and rocky outcroppings will crumble, and you will plunge to your gruesome death, that is, until you get your timing right. There is a good amount of climbing, jumping and plenty of opportunity to use the trusty climbing axe, and these animations are as fluid as I could hope for. Admittedly, there are some light quick time sequences in this regard, especially if you only grab hold of a ledge, for example, with one hand.

To its credit RotTR wastes little time introducing you to your first tomb. This by the way, answers one of the biggest criticisms of Tomb Raider, of the tombs being too sparse and not large enough. Here, the tombs are much more expansive and more frequent. They also feel like proper tombs at that, complete with spiked traps to disarm, many by shooting at them before the swinging spikes impale you, and false floors which you need to be quick off the mark to survive. 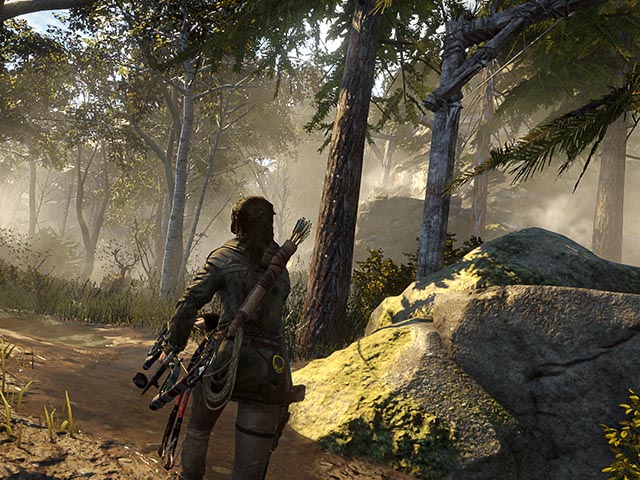 There is also loads to collect, with ancient coins to find, jars to plunder, survival caches and relics to discover and hidden stories in each of these if you take the time to examine them.

All this does give you a sense of being an explorer, and not just because of the major sojourns you take through the game, from one environment to the next, but because of all the small discoveries hidden in the world's nooks and crannies.

The tombs are still puzzle boxes to solve, a part that I thoroughly enjoyed, although these aren't terribly difficult. They are, however, a nice change of pace from the shooting and killing, not to forget the running, that invariably follows your tomb raiding. They also provide some much welcome alone time in the game, where your primary enemy is the precarious environment itself. Indeed, they also provided some of my favourite moments in the game, 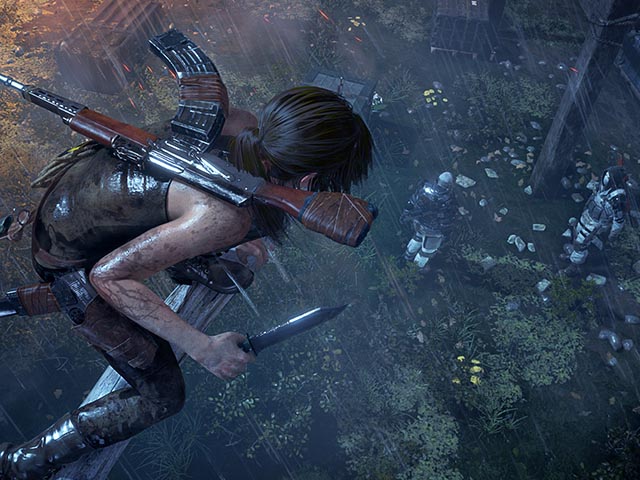 Lara may be a terrific tomb raider, one thing she isn't though is a great archeologist or preservationist. Trouble follows in her wake and destruction, often of the ancient cities she explores, invariably ensues.

This time around the trouble in question comes from Trinity, a mysterious and very old order in the mold of the Illuminati. They too are after the same thing as Lara, namely the key to immortality called the Divine Source. Whereas Lara's pursuit is motivated by completing her father’s work, their motives are much darker. This is not to mention the fact that their leader, Konstantin, is as sinister and cruel as they come. It’s not just his foes to whom is cruelty is directed, but in true Joe Carrol of The Following style, his disciples who disappoint him as well.

Trinity's thugs aren't the only adversaries who want a piece of Lara, so too do the local wildlife, including bears and wolves, and these can be just as relentless and no less dangerous. This was perhaps the only part of the game I didn't like, at times necessitating killing them in order to stay alive.  Of course, I have no such problem skewering a human foe, but I still quell at killing animals, even if they are only virtual depictions.

Nonetheless, early on one has to get accustomed to doing so nonetheless; as your arrival in Siberia is hardly warm or friendly. 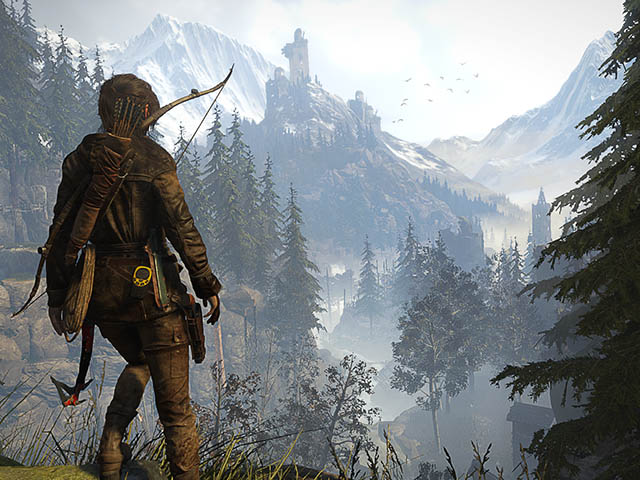 On to the controversial inclusion of micro transactions in the game. The good news is that these are handled very well.

Backing up for a bit, you can purchase the cards that give you boosts using in game currency (credits), which is earned by completing challenges. These range from collecting a certain number of caches, completing a level without taking any damage or dying, or doling out a certain number of headshots in a time limit, for example. Doing so successfully enables you to purchase card packs that give you an array of in game benefits. This though, could be an article all of its own.

Even if you do choose to buy the cards, they aren't hectically expensive, ranging from R13 to R25. Packs are also different to one another, ranging from silver and gold packs of random cards, to an advantage pack which as the name suggests, offers five random cards that offer you particular in game advantages. Then there is also challenge and wild pack, which make the game more challenging or add strange effects to gameplay respectively.

Purchasing the packs with the aforementioned credits isn’t out of reach either. Most of them cost 20 000 credits, which is not as daunting as it sounds. I was able to rack up 12 000 credits easily in the first couple of hours alone with minimal effort. The gold pack though costs triple this at 60 000 credits

Some of the cards are permanent, whereas others are one use only, so you may want to exercise your judgment as to when and how you use them. 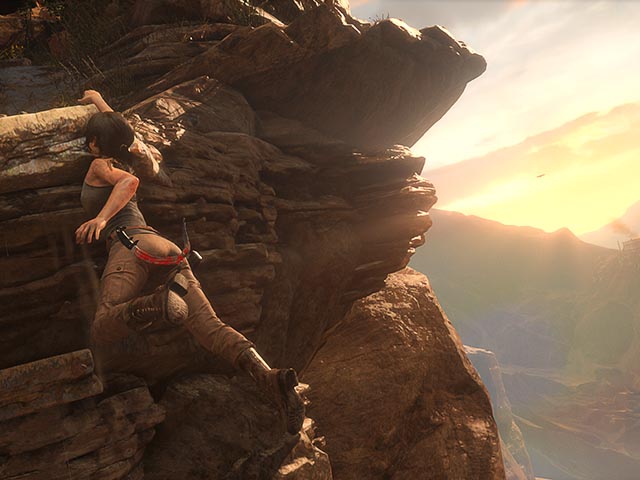 One of the major differences in Rise of the Tomb Raider is the sophistication of the crafting system, and the broader array of upgrades for your weapons.  From harvesting plants to the stuffs of nature (feathers, animal pelts, pieces of bone) your weapons can become much more personalised and sophisticated to suit your play style.

Worth mentioning is that if you want more of a stealth focus in the game, retreating into cover and picking your enemies off one by one, you can enjoy that. Alternatively, you can go in guns blazing if that is what you prefer. However, the latter isn’t available from the outset. In order to equip said guns, you need to find the appropriate components, which makes braving those tombs that lie off the beaten track that much more compelling.

Either ways, there is loads to do, to find, to explore and on offer in RotTR. What is very different is that there is a bit of a RPG flavoUr as well, as you can take on sidequests from The Remnant, rebels fighting against Trinity to keep the Divine Source safe.

Additionally, beyond the breadth of the single player campaign, there are a slew of modes in Expedition as well. These include chapter replay elite, where you can replay earlier chapters with upgraded skills and equipment; remnant resistance, where you can create or play custom missions and compete with friends to earn credits; and score attack, in which you need to finish a level quickly for a time bonus. In each mode, you can also adjust the difficulty, the higher the difficulty, the more points you earn.

….I leap, and I fall. Instead of the hungry chasm laying claim to another hapless adventurer, luck is on my side, as I land on a small rocky outcropping just beneath me. A centimetre or two to the left and it would have all been over. Instead, I can climb back up and try again.

Bruised, but not beaten, the treasure is still within my grasp. 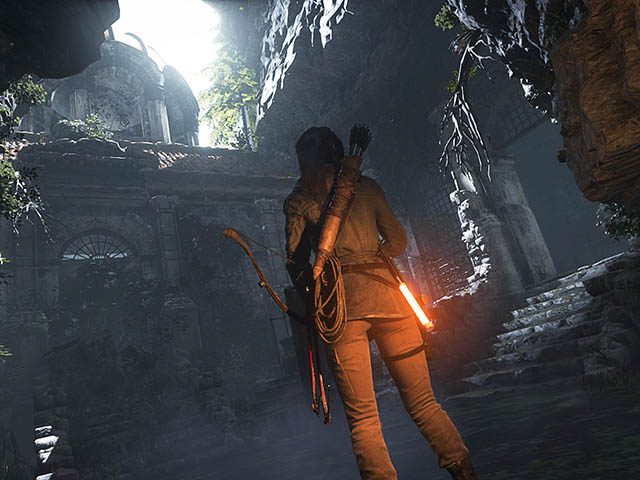 If you cannot wait to dip into more Tomb Raider, and don’t have an Xbox One yet, then I dare say it actually justifies the purchase (in case Halo 4, Sunset Overdrive and Gears of War didn’t already). At the risk of gushing, it is simply the best, most expansive Tomb Raider I have played to date, and with the vast amount of content, it’s a very easy title to recommend picking up if you already have the console at your disposal.

The only caveat at the moment is that it is currently only available on the Xbox One. If you are waiting for the PS4 version, unfortunately then there is a year standing between you, and what may just be one of the best games to come out this year. Either way, if you’re a fan of action adventure titles, I really have only three words for you: Get.This. Game. RRP: R800