Ultrabooks may be the flavour of the moment when it comes to the PC market, but that doesn’t mean desktop users have no use for an all-in-one that merges capable processing performance and an attractive design.

Enter Mecer’s All-in-One (AIO) PC, whose form factor sees all of the processing components built straight into the monitor, resulting in a capable workstation that also enables users to win back some desk real estate due to the lack of a tower.

The epicentre of this AIO PC’s design is the 21.5" Full HD (1080p, non-touchscreen) LED screen that presents HD videos, and high resolution photos with an amazing amount of detail, whilst also boasting some useful viewing angles. This AIO’s black plastic finish at the front is nicely contrasted by the silver metal accents utilised in the rear, as well as on the round kickstand, although we found the bezel to be quite large.

You can find the DVD drive on the side of the AIO, and this is accompanied by a built-in webcam just above the monitor and microphone right below the screen for video chatting on Skype. Unfortunately, many of the ports, including the VGA port, network connector, and four USB 2.0 ports (no USB 3.0 connections) are located at the back of the PC, which doesn’t make for the most convenient layout. Fortunately there are two additional USB 2.0 ports on the left side alongside an SD card reader.

Besides the additional USB ports, users will also find the microphone port to connect their headset to on the left side of the unit. The AIO does have a stereo speaker built into it as well, that is capable of filling up a room with clear sound, though the lack of a subwoofer means it lacks some oomph in the bass department. However, this speaker will be adequate for most home users for personal media consumption (such as listening to music or watching a movie). 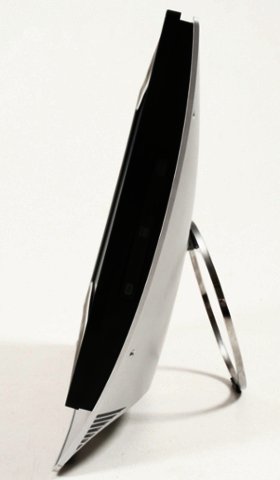 This is one of the first machines we’ve received that runs the new third generation Intel Core i processors (Ivy Bridge); in the Mecer’s case a very powerful Core i7-3770 processor running at 3.4 GHz. We expected a lot from this and we weren’t disappointed. During benchmarking, the processor scored at the top of the league, topping a number of tests.

The lack of a dedicated GPU (graphics processing unit) means that this is not a PC for gamers. Intel’s onboard HD Graphics 4000 GPU may be able to handle some light gaming titles such as FIFA 11, but is definitely not for users looking to play the latest, graphically demanding games. This was confirmed by a 3D Mark 2006 score of 4846 3D Marks, although the CPU score of 7107 was again amongst the best we captured for this benchmark test.

Strangely, the unit is sold with a keyboard and mouse as optional accessories – an odd choice since the unit is not a touchscreen. Mecer’s slim keyboard and MP-156 optical mouse will cost you an extra R158 for both. Our test unit was also not the quietest machine we’ve tested. As for the operating system onboard, Microsoft’s Windows 7 Home Basic (32-bit) makes an appearance.

With above average performance thanks to its third generation Intel Core i brain, and an all-in-one body, the Mecer AIO PC makes a compelling case to become your next SME workstation or home PC. It retails for R7000. Contact Mustek for more information on 011-237-1000.

Keyboard and mouse not included as standard, most of the ports are ideally placed, no dedicated GPU; no USB 3.0 port, not touchscreen-enabled device.

CONS
Keyboard and mouse not included as standard; most of the ports are ideally placed; no USB 3.0 port; not touchscreen-enabled device.
TAGS:
Mecerlocal newsPCAll-in-onecomputerIntel
USER COMMENTS