Superman is the ultimate superhero, armed with an array of powers and abilities that include: superhuman strength, flight, speed, invulnerability, x-ray/heat vision and senses. You'd think he'd be stuck on himself, yet his greatest superhuman ability is humility and selflessness - sacrificing his earthly existence to serve and protect others from evil.

It's an epic quest for hope and peace that this saviour of Mankind has been charged with by his father. Heaven sent, raised as if their own and blessed with superhuman abilities... it's easy to see why Zack Snyder has compared the Man of Steel with Christ in this epic Superman comic book adaptation.

Both figures share a number of traits and while Jesus may not have turned a tank into a pretzel, they're both willing to put others first, continually sacrificing themselves to save the world. That is what we admire about Superman - he's not in it for fame, money or to simply go one up on his arch rival, he's in it to save us.

For the meantime, Man of Steel will be the definitive Superman film. Zack Snyder (Watchmen, 300) has crafted a visually spectacular superhero action epic, which honours its source material whilst attempting a valiant reinvention. A greater focus on Superman's alien side, essentially turns Man of Steel into something you'd expect to see with Steven Spielberg's name on it. Not surprisingly, it's Christopher Nolan of The Dark Knight Trilogy, whose name adds immense weight to this production.

Nolan's mission has been to ground fantasy in a gritty reality, which explains why he probably didn't want to direct Man of Steel himself. Besides being a much lighter character than Batman, there's no straying from the character's alien origins, which make drawing a balance between reality and fantasy difficult to pull off. Man of Steel wavers between alien and real world, teetering the suspense of disbelief on an edge.

Snyder has avoided the Steadicam in most scenes, giving the visuals an added tension and rooting the alien dimension. Unfortunately, this shaky effect doesn't quite pay off... its side effects: agitating the eye, diminishing the production values and swaying the film in favour of visual effects over performances from a stellar cast.

Henry Cavill is Superman, a role he's been aching to play since Superman Returns. He's put his all into the role, chiselling a physique worthy of the superhero and channelling his inner Superman into playing the alien man. While Cavill is almost perfect for the part, he seems cold and melancholic, echoing the decision to cast Daniel Craig as James Bond. You could write this off to his nature; upbringing; or a thankless mission, but you'd imagine there would be more bravado, vitality, warmth and humour to this larger-than-life American hero.

The British actor is supported by Amy Adams, who plays Lois Lane. We're in tune with the bright-eyed and innocent Adams, whose roles are often marked by plucky, sweet-natured fun. However, it's all business and there's less time for sparkle as the hardened reporter fights for the next big news story to crack the glass ceiling.

Michael Shannon is the pick of the actors, generating a demented and sardonic performance as General Zod. Great villains make great movies and Shannon brings the complex megalomaniac to life as he exacts his revenge on Jor-El's only begotten son with the help of his soldiers.

Russell Crowe plays Jor-El, echoing Marlon Brando's role in Christopher Reeves’ Superman. Crowe's part is extended beyond a glorified cameo as the son of "Maximus" reaches for the sort of greatness that echoes in eternity. To further guide and teach the boy on the meaning of sacrifice, Kevin Costner plays his earthly father, whose limited appearances are memorable and serve as an inspiration. 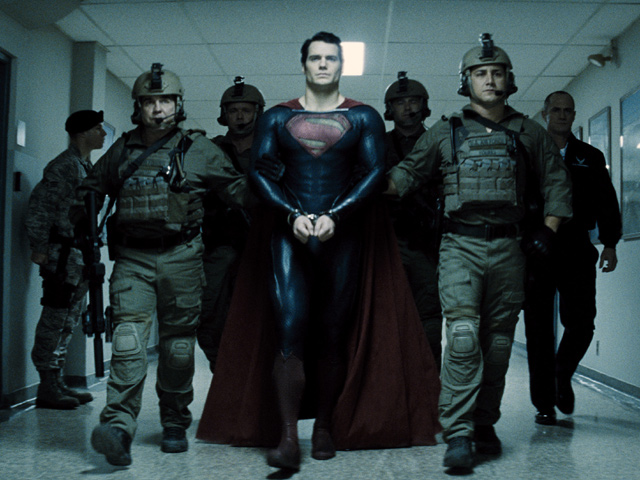 While Man of Steel boasts an impressive cast that also includes regular turns by Diane Lane and Laurence Fishburne, its main feature is the visual effects. From start-to-finish the film feels like a highlights package from a broader work. Every scene comes crashing into frame, leaving little time for the actors to stand their ground, before firing off another impressive special effect or colossal action sequence.

The combat action sequences have a particularly good fluidity, turning extraordinary super powers of flight and speed into an eye-popping visual reality. The exhilaration of Spider-Man's swinging through the city and The Hulk's land-to-air leaps are comparable with Superman's flight in Man of Steel, giving the "Is it a bird, is it a plane?" quote more weight... and even explaining away the cape.

The editing and storytelling keep Man of Steel moving along at a quick pace, zipping back-and-forth in time as we recount some moments from Clarke Kent's youth in Smallville. However, the non-linear narrative breaks our already distant connection with the today and now Superman, making the experience for lack of a better word, alienating.

The costume design is impressive, composing realistic alien armour suits that have their own history, making a terrific contrast with the uniforms of soldiers and ordinary civilians. The impressive wardrobe in the foreground sells a lot of the CGI-heavy action in the backdrop, which adds to the overall production value.

Man of Steel is like a dead serious mash-up between Star Trek and Thor. The epic alien action, futuristic visual effects and exciting casting have parallels with the new Star Trek, while the fish-out-of-water superhero, fantasy dynasty, character dynamics and even some scenes echo Thor. We're treated to an eye-popping, yet disconnected snippet of Superman's story, which will enthral but won't linger.