Puma’s Calibrate Runner pushes the boundaries of sneaker tech with a newly developed midsole done in collab with the smart folks over at MIT Design Lab. Called XETIC cushioning, it looks as if 3D printed (a bit like Adidas’ efforts with the 4D) although actually made from polyurethane foam. 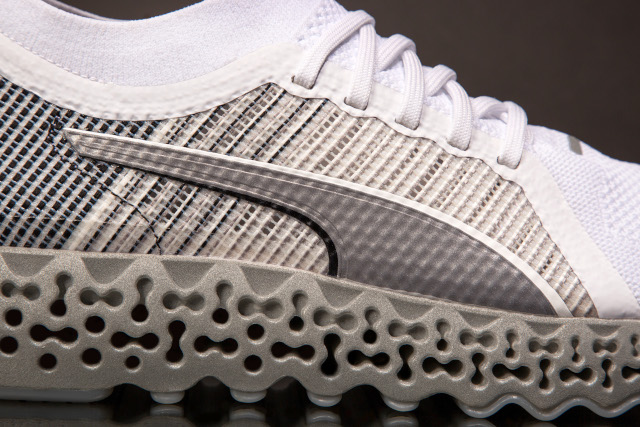 According to the research done by MIT Design Lab, this '8' shaped pattern seen in the midsole of the Calibrate Runner (specific to the XETIC cushioning) creates an optimal structure for progressive cushioning. When looking closely at the XETIC midsole, the 8-like figures that create the unique look actually extend all the way through the sole from one side to the next, allowing you to see through to the other side.

Unlike most other energy return midsoles which are dependent on the unique material used, the physical structure of the XETIC pattern is what helps with cushioning here. When striking the ground with the Calibrate Runner, energy dispersal takes place due to the pattern ‘collapsing’, with the structure expanding to normal when your foot leaves the ground. 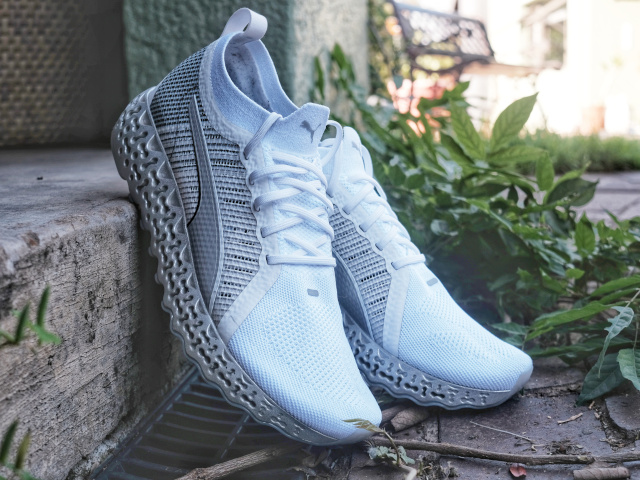 I sat in on the media launch of the shoe, and although Puma pushed the athletic/trainer ability of the Calibrate Runner, it’s clear that the streetwear element of the shoe ranked higher. After testing these on the road and on the feet, I tend to agree that although a gym session or road running is certainly in order, these will be bought for the unique style on offer.

And yes, indeed these are some sweet looking kicks. Out the box it might be the XETIC midsole that immediately catches the eye, but it lingers on the quality and design of the patterned knitted upper. This is combined with a slight off-white overlay on the sides along the Puma formstrip. Puma calls this an “engineered knit vamp with a woven Kevlar panel,” and it's a type of plastic-knit that does not stretch, with enough breathing capabilities thanks to small open strips on the side.The small bit of black weaved in is enough to spruce up the all-white design, although still fitting in with the current white sneaker trend.

The XETIC midsole is almost metallic silver, which works well with the reflective silver of the Puma’s formstrip and logo on the back. 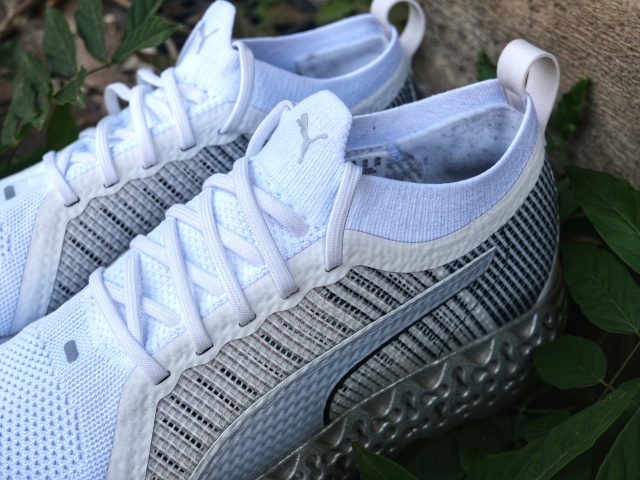 Although generally stretchy, the shoe will stay in place without the laces but you would need them when taking these on the road, even though the knitted collar fits snuggly. Puma provides a collar tag at the back to help slip on the shoe, which actually helps quite a bit.

If you are a fan of white, well this colourway of the Calibrate Runner will not disappoint. Personally, I prefer the Elektro Green one, since, as expected, the white simply did not mix with all the dust and gunk from the road after a few runs.

The bottom line is that the Puma Calibrate Runner is a sleek shoe that has far more in common with Puma’s running range than perhaps the styling of their chunkier RS-X range.

So, while the looks can’t be critiqued, how did they perform on the road and in the gym? To reiterate, locally the Calibrate Runner is sold as a trainer rather than a full-on running shoe, no matter what its name says.

On the road you can certainly feel the XETIC midsole’s chunkiness and I felt slightly more elevated above the ground. The XETIC cushioning provides a comfortable run with a decent amount of heel support and energy return.

That said, the shoes performed better on shorter runs, since taking it to 10 km and more, I thought the front foot support started being problematic and too ‘flat’. I suspect it’s due to the XETIC structure that’s dependent on more layers of the pattern for it to work correctly. Taking a bit away from the comfort of the shoe is the laces that is not padded by a tongue, while I’m unsure about the long-term durability of the outsole.

Can you wear the Calibrate Runner to the gym? Yes, although the chunkiness of the sole might be a problem for heavy lifters and for cross-trainers that need support for ankles. 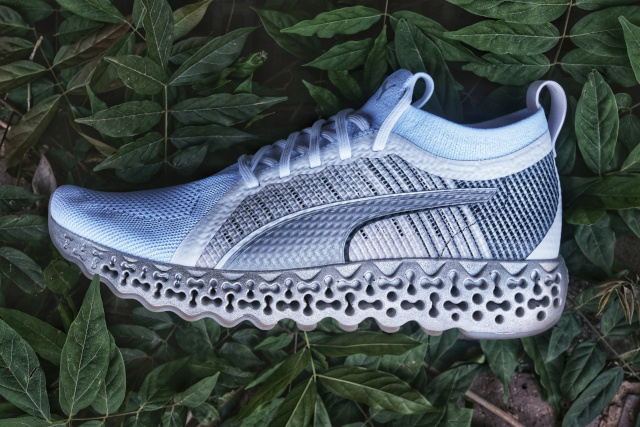 As the first pair of shoes that contains XETIC midsole, the Puma Calibrate Runner comes at a premium. In fact, at R3 300 it’s far from cheap. For that price you’re buying the shoe for the streetwear cred and looks, which personally I feel the Calibrate Runner does offer a unique standout style, especially with the interesting structure of the XETIC midsole.

Puma is correct in selling this as a trainer, and the shoe will serve you well on sub-10 km runs or in the gym. The elevated nature of the midsole might be problematic for cross training when you might be stopping and starting while sprinting, although the shoe felt stable on my runs.

It’s great to see the enginuity of the XETIC midsole, and I hope to see more of this in future shoes, which I believe Puma will be keen to do.

PROS
Stylish new looks, Unique midsole tech, Can be taken on the road and gym