Save on the best gaming TV this Black November
0
comments

Acer has long had a reputation for solidly built and affordable devices for the home or office. More recently, however, it's the Taiwanese manufacturer's highly-specced Predator range that has garnered the most attention, with a number of covetable PC, notebook and peripheral gaming elements. While some are all too familiar with Acer's gamer-specific offerings, we delve a little deeper to see what sets this range apart from the rest.

Sometimes gamers and non-gamers are not all that different - they both want performance and efficiency. The contrast, however, comes to the fore when deciding how that performance and efficiency are delivered. For gamers, it's about three things in particular - graphics, speed and cooling. If a device can deliver those in abundance, they have a loyal fan. This is where Acer's Predator range aims to win over die hard PC and notebook gamers.

The Taiwanese company certainly backs its Predator range in terms of power and speed. Coupled with components and peripherals to provide a rich graphics performance, as well as specific design to ensure things don't get too hot under the collar. 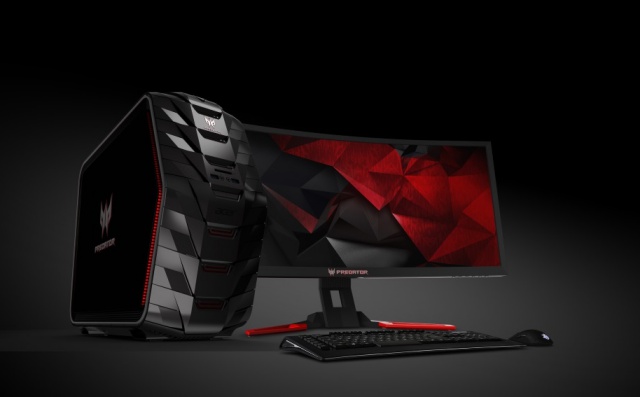 Gaming, like many arenas of fandom, has firmly etched lines in the sand in terms of its users. You're either a PC/notebook gamer, or you're behind team console. While Acer's range of Predator QHD monitors can also cater to the latter, it's the company's towers and notebooks that draw our immediate attention.

In the tower portfolio, the G6 stands head and shoulders above the rest. It is the newer of Acer's offerings, and brings with it, a number of enhanced technologies for those aiming to build themselves as powerful a gaming rig as possible. These include a 4.0 GHz 6th gen Intel Core i7 (6700k) processor, as well as Nvidia GeForce GTX 980 Ti to handle the graphics. Furthermore, Acer has slotted in 64 GB of DDR4 memory to keep everything ticking over very nicely indeed. The inclusion of one of Nvidia's most powerful GPUs means it is also VR Ready, which is undoubtedly where the future of gaming is heading.

For those craving customisation, the G6 sports Easy-Swap expansion bays, allowing gamers to switch out bays without any hassle. In terms of audio, Acer has opted for a SoundBlaster X-Fi MB5 setup, which provides crisp and clear sound quality, perfect when you're trying to take down a rival team during cooperative FPS missions, with communication being the key between victory and defeat.

Finally, when things get a little too dicey and you need to push the overclocking button (up to 4.2 GHz), Acer has given the G6 a number of air intake zones on the front and back to create a powerful airflow, which forces all the hot internal air out of the tower.

For those who don't necessarily wish to be desk bound, Acer has a Predator notebook worthy of further inspection. Christened the Predator 17 due to its screen size, it packs a solid punch. This gaming notebook features a 17.3" UHD display (3840x2160) front and centre, which certainly makes the gaming experience more immersive. It can also support up to 4K quality content, which means it's also handy when not mashing buttons and simply watching your favourite TV series or movies.

As we delve deeper into this notebook, swathed in a rather menacing black with red accents (as is the entire Predator range), we find specifications built to deliver a superb performance. First, a 2.6 GHz Intel Core i7 processor, which is paired with an Nvidia GeForce GTX 980M graphics card and 32 GB of RAM. This trinity of processing power means the Predator 17 is never outgunned, even with the most demanding of games, or gamers for that matter.

In terms of added features, Acer has not scrimped there either. There is PredatorSense for one, which gives users a full rundown of the key specifications of the notebook and how optimally they are performing. It also integrates the ability to choose between different macro keyboard setups, depending on the game or user preference.

For those wanting a change from the red accents, Acer has made the backlit keyboard programmable, so users can choose from 16 million different colours to set the gaming mood. Furthermore, the macro buttons can be given their own distinct colour orientation, to ensure it's easy to decipher when in the thick of a battle.

Last worth pointing out is Killer Doubleshot Pro, which gives gamers the control over which applications are given priority when connected (wired or wirelessly) to bandwidth. This feature can come in pretty handy, especially with secure bandwidth while travelling not always as stable or readily available as one might hope.

Tools of the trade

They say a poor workman blames his tools. Acer is aiming to eliminate any such excuses with its peripherals, and gaming monitors in particular. The most enticing one on offer is the Predator Z35.

One of three monitors showcased by Acer at IFA 2015 in September last year, it was the Z35 which left a lasting impression. This curved 35" display (2560x1080) features Nvidia's Ultra Low Motion Blur (ULMB) technology, which can cope with up to 200 MHz refresh rates to keep things clear, an important feature after several hours spent in front of any monitor. Added to this, is Nvidia's G-SYNC functionality, which syncs the refresh rate of the monitor to that of the GPU. As such, screen tearing and stuttering is all but eradicated.

Along with ensuring the game experience runs uninhibited, the Z35 carries the added advantage of a wraparound-esque view. Yielding a 21:9 aspect ratio from its 2000R curved display, it makes immersive games feel even more so. Finishing on colour, Acer notes the Z35 touts up to 100% of the sRGB standard colour gamut, ensuring images pop off the screen. This results in a monitor that is great for games, graphic design or simply watching movies.

In the world of PC and notebook gaming, it's tough to stay ahead of the curve. Acer's Predator gaming range, however, does just that, by delivering a number of devices that are not only highly specced, but also well constructed. To that end, gamers can rest assured that their products of choice will last for a number of years to come, as well as provide a superb gaming experience.