Later this month EA and DICE’s Battlefield 4 will officially be invading gaming systems around the globe (on October 29th to be precise), and to prepare for the big day, DICE launched a beta for Battlefield 4 earlier this month. Thus, we summarily checked our ammo and dived headfirst into the chaotic environment that beta testing tends to be.

As anyone who has participated in a beta testing period will tell you, things almost never go as smoothly as you would hope – the reason why this kind of testing is needed in the first place. We’ve encountered bugs ranging from flying boats to underwater tanks, to less humorous crashes and Origin brainfarts.

Some server queuing issues can also be expected as players swarm to get their hands on the beta (which is now available to everyone).

As we were dropped into our first game, it was immediately obvious that our BF3 controls hadn’t survived the migration as well as we’d hoped. After a quick sensitivity adjustment we were off though, and the first thing one notices is how differently the character models move in BF4.

Your character no longer starts sprinting like they’re the Flash’s illegitimate son; instead they have to accelerate like a real soldier lugging around 20 kg of gear. Your character starts off laboriously, and works their way up to a jog and then a run, a mechanic that will have an effect on a lot of fast-paced play styles out there.

Running up beside a burnt-out bus, our first enemy suddenly appeared around a corner sprinting furiously. We both lifted our weapons at the same time, fingers squeezed triggers, virtual gunpowder combusted, and then it was over. A solid second of hurling bullets into each other’s faces and we were both staring at kill cams. 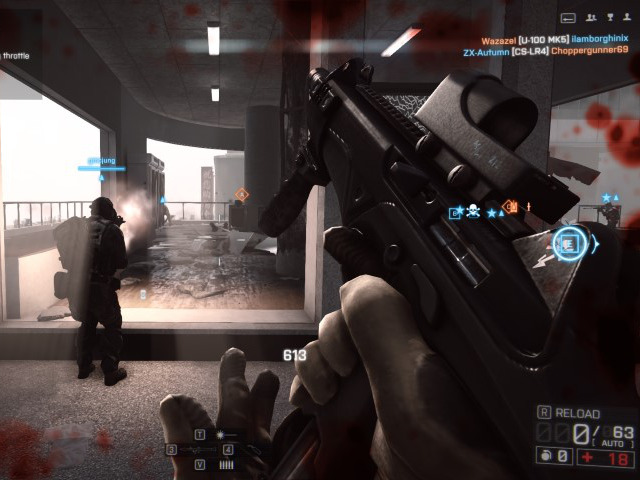 As we fumbled our way through a couple more rounds we had the opportunity to try our hand at all the updated BF4 classes.

The Assault, Engineer, Support, and Recon from BF3 are back fulfilling their respective roles, but we did notice a few changes in the beta. The Assault and Support’s dispensing systems have been changed and the Support now packs some serious firepower in the form of a multiple grenade launcher. The recon has also received some upgrades, now capable of carrying C4 explosives and motion sensor balls.

While beta players don’t yet have access to the full BF4 arsenal, we were able to get a good feel for some of the new weapons. Some notable improvements includes a new ‘double-sight’ optics system (allowing certain weapons to sport two sights instead of the traditional one), and RPG’s which can lock on to laser designated targets. Players can also unlock ‘battlepacks’ if they perform well enough, which will award you with a number of weapon accessories, gadgets and XP boosts. 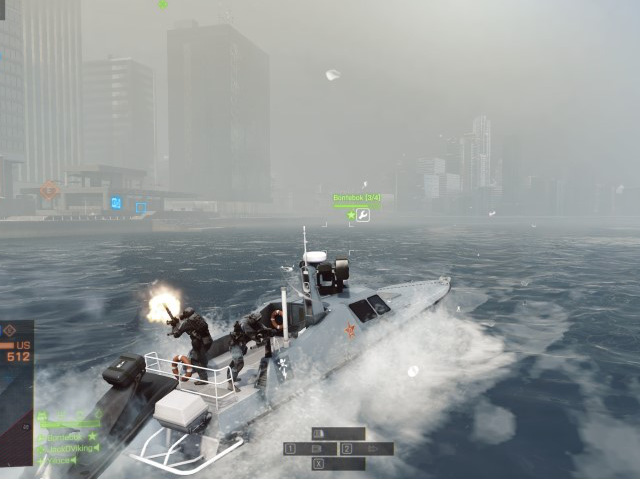 Something told me our boat wouldn't qualify for a fishing permit.

It’s the way you move

In addition to the new sprinting mechanic we mentioned earlier, a number of improvements have been made to animations and movements, making characters feel less like gun toting rabies victims and more like real people.

There’s a real sense of weight that’s been added to player models, with soldiers realistically shifting their weight as they run around corners and panting as they assail flights of stairs.

We were also surprised by a new peaking mechanic the first time we crouched down behind some cover, as our solider automatically started tilting his head to try and look around it. This is a welcome addition to the game, but it remains to be seen whether it’s going to have a noticeable impact on the battlefield. 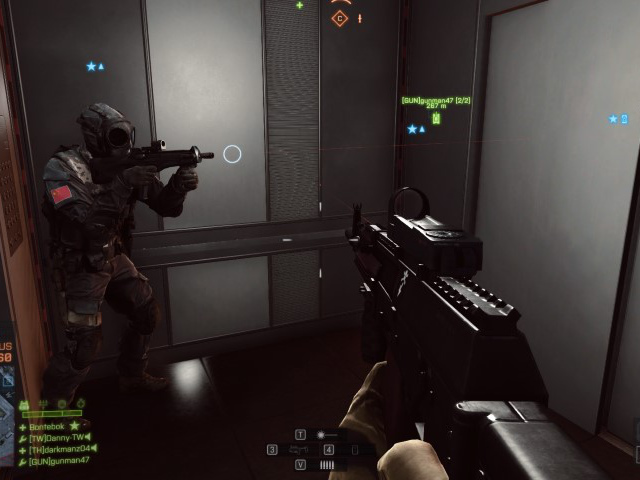 As always, one of Battlefield’s most enjoyable aspects is the vehicle combat, with tanks, IFV’s, attack boats, jet-skis, APC’s, and helicopters available in the beta at present. All of these vehicles have received great cosmetic updates, and driving them feels more realistic than ever.

One of the biggest changes to vehicle combat in BF4 is a new ammo system for certain types of vehicles (such as tanks and attack helicopters). This prevents players from spamming shells and unguided rockets mindlessly, and places more of an emphasis on strategic engagements.

The most interesting new vehicle available in the beta is of course the attack boat, capable of carrying four soldiers and dishing out some serious firepower. The driver has access to an automatic cannon and missile launcher, while two gattling cannons are mounted on the sides of the craft. It’s also surprisingly manoeuvrable, giving the controlling team a lethal asset with which to suppress both infantry and armour from a distance. 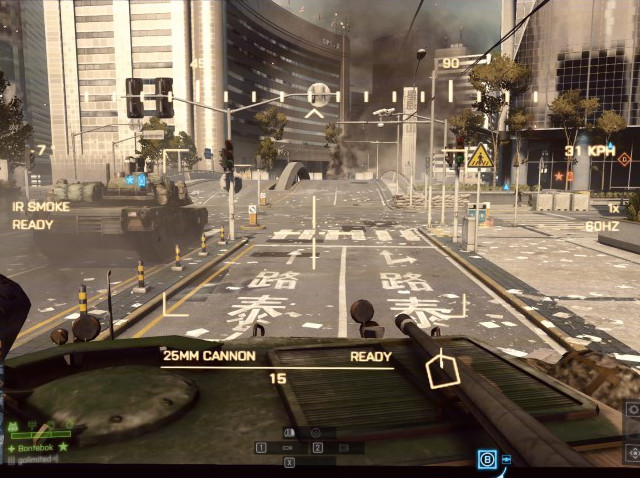 While no one is going to blame you for thinking Battlefield 4’s trailers look eerily similar to BF3 footage, the Frostbite 3 engine is a clearly different beast in the flesh. While the beta only allows players access to one map at this stage (Siege of Shanghai), even this limited exposure has been enough to ease our woes about the game’s graphical prowess.

Improved environmental physics and “levolution” are the two main improvements that DICE has been hyping up in recent months, with players able to drastically change the layout of a map simply by getting trigger happy with some explosives. This feature has been around before, but in BF4 the insanity level has been ramped up to suicidal, with players able to take down towering Shanghai skyscrapers in a glorious display of architectural destruction.

These mechanics allow for some seriously crazy battles, as throngs of players battle it out inside fancy apartment blocks (replete with working elevators), and suddenly feel the building starting to wobble precariously as attack helicopters rain missiles into the superstructure. Then it’s simply a question of ‘to jump, or not to jump?’, as players frantically parachute from penthouse windows to prevent being flattened by the avalanche of concrete. Simply glorious. 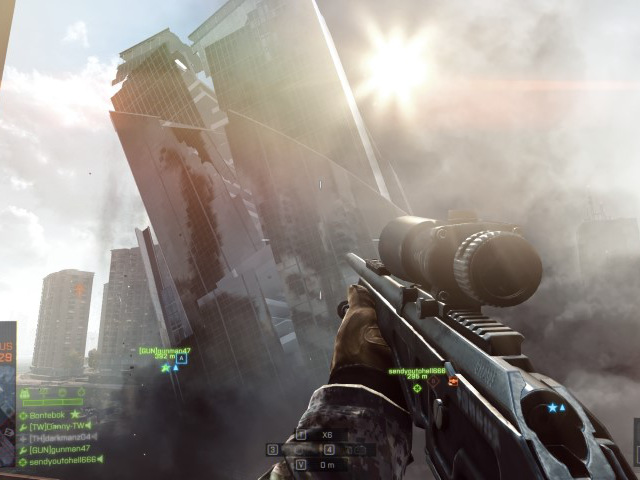 All in all, our experience with the BF4 beta has been great. We can’t wait for the full release of the game when we’ll be able to try out all the gadgets, weapons, and vehicles that BF4 has to offer.

If you haven’t given it a whirl yet and have some bandwidth to spare, we highly recommend checking out the free beta while it’s around. Battlefield 4 will launch for PC, Xbox 360 and PS3 on October 29th, and for next-gen consoles at a later date.

Players who purchase the PS3 or Xbox 360 versions will be able to upgrade their games to the PS4 or Xbox One version for $9.99 (South African prices are as of yet unconfirmed but it should be around the R100 mark).