Kurosaki Ichigo, a high school student that always had the gift to see ghosts and spirits, encounters the shinigami Kuchiki Rukia (a shinigami is an immortal responsible for keeping balance between the world of the living and dead). She saves him and his family from a Hollow (a demon-like being that eats souls) attack, at the cost of injuring herself. Rukia, unable to defeat the Hollow, transfers her shinigami powers, using her Zanpakutõ sword (see below), into Ichigo as a last resort. Unable to continue with her job, Rukia depends on Ichigo to take on the role of a shinigami in her place while she is recuperating, teaming up to fight against the Hollows plaguing Ichigo's town. So starts one of the most memorable anime series of the past few years - Bleach.

Ichigo is joined by a colorful array of school friends and other shinigami in his travels. His tale later leads onto other worlds, like Soul Society where the shinigami live, and even Hueco Mundo, realm of the Hollows.

The Bleach Anime series started in 2004 and ran until 2012, comprising 366 episodes. Tite Kubo (the original manga artist for Bleach and Zombiepowder) thought of the idea to draw a shinigami in a kimono, which formed the roots of the design and the birth of Rukia Kuchiki.

He originally planned to name the series 'Black' due to the colour of the clothes the Soul Reapers wear, and even 'White', but settled for 'Bleach' as a title because of its association with the colour white.

Bleach is filled with religious themes and incorporates many philosophies, such as the traditional Japanese beliefs that spirits coexist with humanity and can be good or evil. The dead are prayed for in Japanese culture and a great example is Ichigo’s friend Orohime who prayed for her brother to have peace in his soul after he died in a car accident. She prayed every day, but stopped praying after some time, not knowing that her brother did not move on to Soul Society (Heaven). Because of this her brother’s spirit turned into a Hollow and attacked her. This is clearly a reminder to especially the Japanese audience to keep honouring the tradition of praying for the dead, lest they get upset and cause havoc in our world. 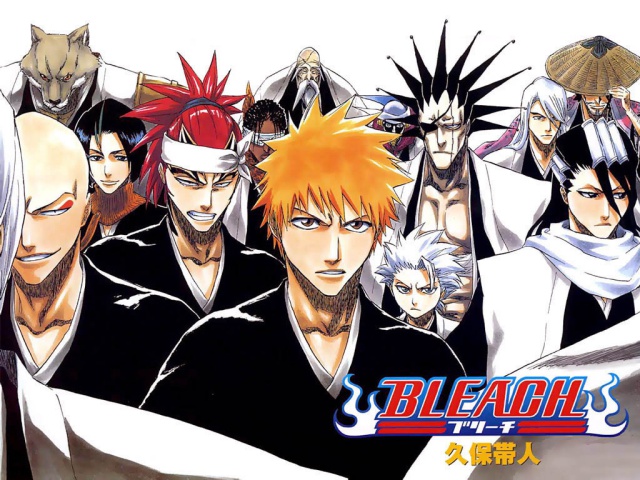 Ichigo and his fellow Soul Reapers

This Sword for a gunfight

One of the stand-out features of Bleach is the use of the Zanpakutō. Each Shinigami carries such a sword, and they are all imbued with mystical abilities and have a spirit within them that guides its user. They are forged from a shinigami’s soul and each has a name like Ichigo’s Zanpakutō whose name is Zangestu. Zangestu appears to Ichigo as an inverted version of Ichigo (his hair and skin are white and his eyes have black pupils with white irises). These weapons grow with their users, and pair together to become powerful forces to be reckoned with.

Bleach’s soundtrack is incredible, enough to convince one to continue to watch the show. Music from great bands like Beat Crusaders (their song Tonight, Tonight, Tonight was the fourth opening song for the series), Orange Range (the beautiful song Asterisk), and the awesome talent composer of Shiro Sagisu, will keep your ears filled with as much action as your eyes.

Added to this are great storylines (such as when Ichigo and friends go and save Rukia in Soul Society) and character development that delves into each one’s life story, resulting a show that will make you feel like one of them until the last episode.

Bleach has become one of the most popular anime around, with tons of fanpages on Facebook, and sites where there are loads of Bleach figurines and fan costumes for sale. There are also four movies and even a musical to boast about. Though the anime itself ended after 366 episodes, the manga is still ongoing. Luckily there are rumours that the anime is going to start up again - and to tell the truth, we can’t wait.

More on the Studio: Studio Pierrot was founded in 1979 by former employees of Tatsuno Production and Mushi Production and it is located in Mitaka, Tokyo. Two of the company's anime series won the Animage Anime Grand Prix reward -  YuYu Hakusho in 1993 and Saiyuki in 2000.

Story breakdown - Here is a nice breakdown of the story arcs and the episodes:

Also watch: If you would love to see more anime with shinigami, Have a look at Yu Yu Hakusho and Deathnote.