Nomaledi lay on the white mattress as her handler fussed about her, attaching the electrodes to her temple and neck. She rolled her eyes – like she of all people needed to be told what to do. Pity she had to start so soon – the view of Solitaire from the tiny reinforced window had been beautiful, but so dry, as the convoy stopped on the dirt road next to the dried-up riverbed.

“Jislaaik. Tell that little girl to hurry up,” barked Pretorius from the van door, his hands shoved deep into dust-stained jeans. Nomaledi’s handler stopped fussing with her hair and went over to the surly man, wringing her hands and murmuring apologies. That was actually better – she didn’t need anyone interrupting. She closed her eyes and concentrated, relaxing all of her muscles one by one, the cool crisp sheets underneath her fading away.

The darkness behind her eyelids started changing. Instead of the red-static supernovae, she saw points of silver light, moving, leaving behind them glittering comet-contrails. She saw their complex Brownian topography, then reached out and tweaked it, pulling them closer…

Outside the heavy armoured truck, the sky began to turn. The white glare of the sun faded as clouds began boiling in the west. For Nomaledi, it seemed to only take minutes. Outside, Pretorius complained for a good hour before falling silent, watching along with the convoy guards as the sky began to darken.

“Finally. This is blerrie expensive, you know,” said the farmer, turning to the guards. They stared back, stolid behind mirrored visors. He stuck out a hand, shoving it back awkwardly into his pocket after none of them took it.

Two booms sounded behind him and Pretorius turned to look at the oncoming storm front, frowning. “I didn’t see lightning… any of you ouens see any lightning?” He turned back, and yelled in shock.

Two of the men were slumped against the Casspir, helmets caved in, while the third screamed into a walkie-talkie and waved his rifle around in one hand. The barrel swung towards Pretorius and he yelled and threw himself to the ground, spitting red dust as the rifle barked over his head. From the corner of his eye he could see dark, ragged figures charging through his olive orchard, firing from the hip at the convoy vans and the shouting guards spilling from them.

Inside, Nomaledi frowned at the distant booms. She could feel the static building, but it was too early for lightning. Maybe one of the cloud-seeder drones? But they weren’t supposed to be going supersonic, not now… and what was that sound? She could feel herself drifting back to the ground, and fought to keep her focus on making the rain.

Her concentration was broken by a sudden thundering, far too close. She sat up and plucked off the electrodes, swinging her feet onto the cold sterile floor of the van. As she reached the door, a dark shape flashed in front of it, trailing smoke, and slammed into the next van along with a tortured metallic scream. She flinched and slumped against the side of the door, coughing.

The scene was utter chaos. The rocket had punched through the Caspar’s flank, blackening the white paint and blowing away most of the Department of Agriculture logo on the side. Three dead men lay sprawled on the ground, and a dirty balding farmer in a plaid shirt and jeans, covered in dust, was leopard crawling into the bushes on the side of the road, babbling in Afrikaans. Nomaledi ducked as another rocket came down from the hills and hit one of the vans further down the convoy, followed by screams.

Figures burst suddenly from the donga, waving AK-47s and shouting. She screamed and scrambled back into the van, but two women in camo pants and balaclavas grabbed her ankles and pulled her out, gripping her hands behind her back. She drew breath to scream, and a wad of cloth was shoved in her mouth, and a hood dropped over her head. 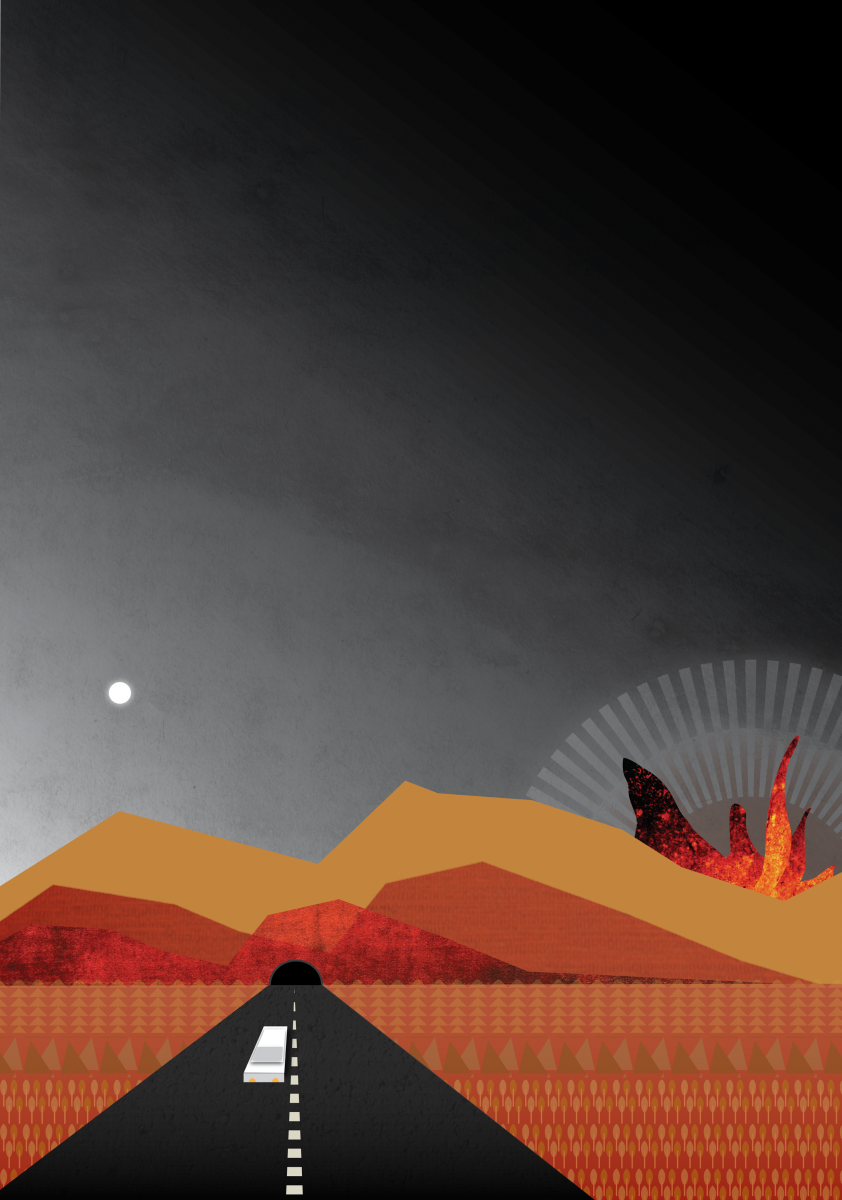 More about the author: Thomas is a researcher and advocate at UCT for open source everything - education, technology, scholarship and coffee. He first started writing at 16, and completed his first novel-length story three days before he turned 18 (and it was utterly awful). He rarely finds time to write (fiction) anymore, but enjoys thinking up improbable plotlines featuring anarcho-syndicalists snarking with idealistic imperialists. Currently, his favourite author is Kelly Link.