Electricity. It's a sensitive subject for most South Africans, especially as the past few years has seen its supply and ready availability prove wavering. Added to this, are price increases, which locals can very rarely do anything about. That's where the Power Buddy from South African power company, Coastal Power Solutions (CPS), is aiming to play a part. A compensation device at its core, the company believes the Power Buddy can save users anywhere between 10% and 20% on their monthly power bill.

How does it deliver on its promise, you might be asking? 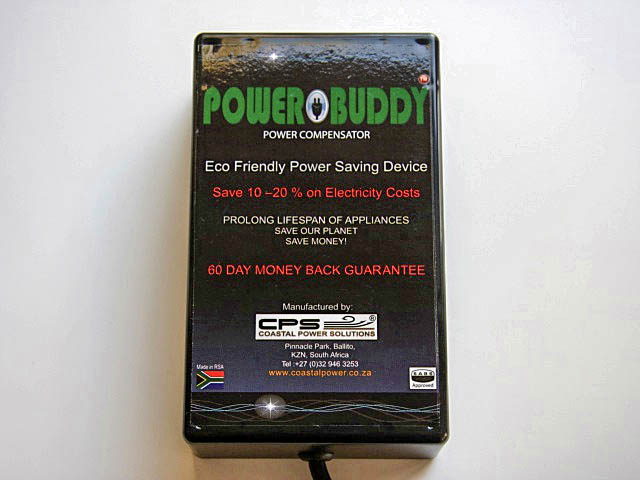 First and foremost, it needs the right conditions. One should not, for example set up the Power Buddy in a small apartment and expect to yield the aforementioned up to 20% saving. CPS says the best place to put the Power Buddy to use is in a large household, or small to medium sized business, in order to reap the most significant reward.

Take any modern home or office, and you'll likely find all manner of electrically powered appliance, from fridges and dishwashers to multifunction printers and air conditioners. All these devices make use of magnets within their electric motors, and are classified as an inductive load. Using a "correction technique" as CPS terms it, the Power Buddy is able to lessen the lag between current and voltage of not only those appliances, but the entire household or office space power grid they are connected to.

From there, the actual power required to run an oven or computer server, for example, reduces to match the feedback power given off by the power grid. To that end, CPS believes the Power Buddy can ensure the active power and appliance kilowatt demands are in sync, which means little to no additional power is being wasted, and, more importantly, is not being compensated for by your wallet at the end of each month.

CPS does, however, point out that a certain number of inductive load producing appliances should be present in the home or office you wish to put the Power Buddy to work. At minimum, would-be Power Buddy users should have at least five such appliances in use per day.

As far as return on investment goes, the Power Buddy retails for R599 per unit. With a saving on one's monthly bill of up to 20%, CPS believes the Power Buddy can theoretically pay for its itself within the first four to six months of use. For companies that suffer from high monthly electricity bills, or need the lights running overnight as part and parcel of their business, the Power Buddy makes plenty of sense.

Medium to large households can also benefit from the electricity savings the Power Buddy promises, particularly with air conditioners being used to cool down a large house during summer, or indeed electric heaters to warm it up in winter.

Added to this, is the fact that it's a simple matter of removing the Power Buddy from its packaging and plugging it into a standard wall point. For the best results, CPS advises users to plug the Power Buddy into the closest point to their electricity box. The closer the Power Buddy is to the central power grid, the more effective it can be. An additional benefit offered by the Power Buddy is its ability to prolong the life of household appliances, according to CPS, which is yet another significant money saver in the long run.

For all the benefits, the Power Buddy does have a couple of limitations worth noting. It cannot be implemented in a three phase system or heavy industrial area, where electricity usage exceeds 6000 kWh per month. CPS can be called out for a consultation, and advise interested users on installation of the Power Buddy.

While the Power Buddy will not stop those frustrating power outages, it is an extremely helpful device for those whose electricity bill is becoming worryingly high. Additionally, it gives home and business owners alike the gratifying reassurance that their property is operating as efficiently as possible from a power consumption standpoint, not to mention being a solid return on investment.

SPECIAL OFFER: TechSmart readers are offered a 10% discount on orders placed by typing "TECHSMART" as Coupon Code when purchasing a Power Buddy online.

The Power Buddy retails for R599 per unit (including VAT).

For more information on the Power Buddy, or to make enquires about purchasing one, head here.