BCX reshapes the South African VoIP sector with in...
0
comments

It seems as though Huawei has ramped up its activities in the last few months of the year, going from detailing its artificial intelligence ambitions in October, announcing a couple of partnerships as well as its forthcoming cloud investment and launching the excellent Huawei Mate 20 Pro (review).

Apparently though, it isn’t slowing down as the year winds down, as the company debuted a campaign called ConnectUnity: Moving beyond Connectivity, at the end of last week in Woodmead. The campaign consists of a dance tune and music video; created, produced and performed by talented young South Africans.

At the event, Huawei SA CEO Spawn Fan explained that Huawei was known for its technology but the company wanted to highlight what connectivity meant beyond technology. “Connectivity has a transformative power to bring opportunity, build communities and promote unity needed to build a brighter future for South Africa and Africa.”

“We wanted to do more outside our ICT investment, so ConnectUnity is about showcasing the value connectivity brings to every life it touches. We want to encourage the spirit and power of togetherness,” he continued.

Huawei Creative Director Xavier Wong added that a song was “a natural choice” for the South African campaign because music is such a uniting force. “South Africans love music and dance and so a song was an ideal tool for the ConnectUnity message; apart from the song and music video, it can be shared as a ringtone and download, played at events. It also has a universal appeal.”

Speaking at the event, Minister of Communications for South Africa, Stella Ndabeni-Abrahams stressed the importance of extending connectivity and access to all South Africans so that they can become a part of a dialogue.

“The key word is unity. How do we make sure that in our diversity we find what is important and what unites us? One thing that is crucial, is that you have to create dialogue. For people to be meaningfully involved in that dialogue, they need to be connected. We want people to be able to provide solutions to their own challenges,” she stressed. 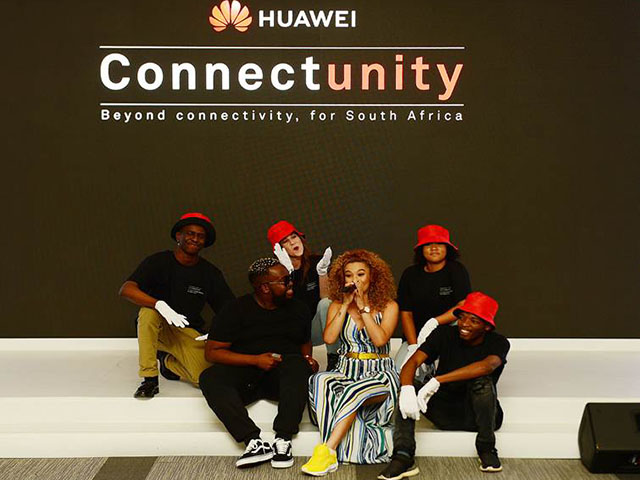 The song, ConnectUnity, was produced by producer/rapper Big Dreamz and features up and coming female vocalist Mikhale Jones. Grammy nominated producer and audio engineer Mazwe Mtetwa collaborated on the track. The music video was produced by multimedia agency, Cut2Black, on location in Johannesburg.