At a function held in Johannesburg this week, Samsung announced its R280 million Equity Equivalent Investment Programme (EEIP), projected to have a measurable impact on job creation and a contribution of nearly R1 billion to the South African economy at large.

EEIP is an initiative of the Department of Trade and Industry (the dti) where multinational companies that are unable to sell equity in South Africa are invited to participate and contribute positively towards B-BBEE and development of South Africa. The announcement event, which was addressed by the Minister of Trade and Industry, Dr Rob Davies, through a video, as well as the President and CEO of Samsung Africa, Mr. Sung Yoon, followed Samsung’s recent commitments to long term investment in South Africa.

According to Minister Davies, the Samsung South Africa’s Equity Equivalent investment amounts to almost R280 million over 10 years. It joins nine other multinationals that have been approved for a value of R2.2 billion collectively. The programme has to date resulted in the creation of over 3 000 direct and indirect jobs.

The Samsung plan will create and address key developmental aspects linked to the National Development Plan (NDP) and overall transformation of our economy. These include the Black industrialisation through e-Waste recycling, beneficiation research and development in partnership with Mintek, which is a first for Africa, where a beneficiation plant is planned to be built and maintained by South Africans, and operated by a Black entrepreneur, enterprise development, and the development of township economies through Accredited Services Centres and software development. 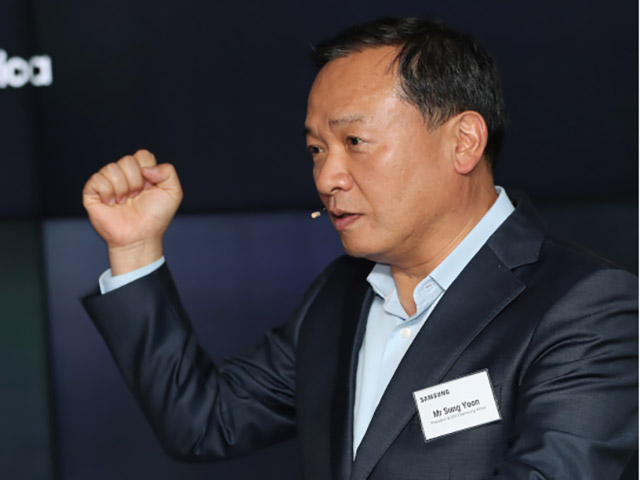 “We are delighted that the Samsung EEIP will have the following measurable impacts on the South African economy: it will result in the creation of 262 direct jobs; it will allow the emergence of a new Black Industrialist; it will support 13 black-owned and women-owned businesses and will contribute R945 million to the economy. We are happy that the dti has contributed and supported Samsung in the design and development of this programme that will result in the establishment of five accredited service centres that are black and women-owned. These will be providing repair service to all kinds of brands of consumer electronics, hand-held devices, air-conditioning and refrigerators,” said Minister Davies.

The Director of Business Innovation Group and Corporate Affairs at Samsung South Africa, Mr Hlubi Shivanda added: “We believe our EEIP strategy will help alleviate the many challenges the nation faces. Our alignment with the National Development Plan (NDP) 2030 is part of our statement of intent. The fact is, Samsung is firmly committed to growing South Africa through socio-economic change and has dedicated the necessary resources and time to create a future, which was once merely a dream.”

The approved Samsung SA’s EEIP has an integrated approach, which means that Samsung will be an integral partner in the creation of the first and only black-owned and operated e-waste beneficiation plant in Africa that can separate Waste Electronic and Electrical Equipment (WEEE). The company has also opted for a strategic partnership-aligned model to achieve greater impact. In this regard Samsung has partnered with government departments such as DEA, DHE, DTPS and the IDC. UWC has been selected as anchor partner for the development of black application development skills. Additionally, a partnership with Microsoft AppFactory will provide real experience to supplement the theoretical knowledge gained by beneficiaries at UWC. Mintek will be Samsung’s technology partner for e-Waste beneficiation.

Ultimately, The Samsung SA EEIP will make a measurable difference to socio-economic development of black South Africans. The alignment with the overarching objectives of the NDP Vision for 2030, B-BBEE policy, Industrial Policy Action Plan, as well as the Gauteng Township Economy Revitalisation Strategy is set to make a difference by; strengthening government’s Black Industrialisation Programme, driving a culture of innovation through digital solutions, enhancing entrepreneurship development, job creation and township economic development and technical skills development to contribute to much needed skills in the country and raise the prospects of employability.

Samsung will continue to pursue opportunities where people can become meaningfully engaged in the economy and in doing so, have a positive impact on their families, communities and therein, the entire nation.