The anatomy of an Internet giant

As per the latest Effective Measure results, there are only three websites that have managed to crack the 2-million unique monthly visits mark. Two are news sites, updated in real time and frequented by a wide audience: MSN (with 2.3 mil) and News24 (4.4 mil). The top slot, however, goes to Gumtree South Africa that boast a whopping 7.9 unique monthly visits – nearly double the amount of the runner-up.

One has to wonder what the secret to the success is – although Gumtree is not a new entry to the market (having launched in South Africa in 2005, following the brand’s success in the United Kingdom), they weren’t the first classified to launch in South Africa. Competition has been fierce, and the size of the online audience in the country remains limited. However, Johan Nel, MD of Gumtree South Africa, says the fact that anyone can achieve a visitor base of such magnitude speaks volumes about the changing Internet landscape in Africa.

“When confronted with those kinds of figures – and the accolade, “biggest website in South Africa” – we shouldn’t just look at how it’s done, but at what it says about the Internet population in general,” says Nel. “The content on classifieds is user-generated. It takes a level of sophistication and Internet savvy to use, whether as a buyer or a seller. To me, the fact that any website can reach almost 8 million regular users a month is a sign that the market is maturing faster than expected. It demonstrates that South Africans are being more entrepreneurial online. They don’t want to just browse, they want to be active participants. It’s good news for us, and great news for digital marketers in general.”

Nel is a well-known techpreneur and media expert, having founded Pan African success story Umuntu Media several years ago. “This is a sign of the times, if ever there was one,” says Nel. “South Africa is ready for digital. In fact, if you are still offline, you’ve missed the boat. There is no other medium that allows you to interact with this many people, and it’s growing rapidly.”

But, as Nel cautions, even the giants of the Internet world can’t afford to rest on their laurels. “The majority of our strategies going forward have been about meeting and preparing the next generation of users,” says Nel. “The ways we are going to win over the next 8 million visitors. Part of that has been our strategy to team up with job creators, wi-fi and free Internet providers, about putting activators on the ground that are talking to ordinary people on the street about the power of the online world. Our goal has never been to get traffic to the site at any cost, because that is a quick win and a quick loss. For us, it’s about finding success online. Successfully finding a flat. Successfully marketing your small business. Successfully buying your first car. The victory lies in the millions of little, powerful transformations that happen on the site – that’s how we’ve won our traffic.”

The platform has never been afraid of risk-taking when it comes to strategising, including the recent introduction of an innovative vehicle sales dashboard and the subsequent monetisation of the automotive vertical for users with more than two ads. “When you examine international best practise, the rule of thumb is that your site always has to do what it’s meant to do for the user. It sounds deceptively simple, but it’s not. When Craigslist monetised, for example, it wasn’t done to bring in extra profits. It was about keeping spam off the site and maintaining the integrity of the user experience. Our goal will always be to connect buyers and sellers, safely and conveniently. It’s not to run the slickest site or to add dozens of extra features and layers of complexity. Our simplicity is the very thing that people love.”

Unlike many competitors, the site “deflates” its potential numbers by automatically expiring ads after 30 days. “Not a lot of online classifieds are willing to go that route because if you keep ads live for infinite period, it makes you seem bigger than you actually are,” Nel explains. “Part of the reason Gumtree is favoured by automotive dealerships is that the fact that they have greater control over their ads and ads are automatically removed after a period of time, which means that their leads aren’t having the frustrating experience of responding to ads for cars that aren’t in stock any longer. And that’s true for all buyers and sellers. The data integrity of the site has to be maintained for it to stay relevant.”

The site also attributes its success to a renewed focus on mobile apps and integration. “We know that our audience is mobile, and we need to be too,” says Nel. “Our site has to be mobile friendly, which means minimising the users’ data costs and ensuring a smooth experience.”

Nel says that despite being nearly twice as large as the runner-up, the site hasn’t reached its plateau yet. “We are growing, and there is plenty of room to grow. That’s the exciting part of being an online company in South Africa.” 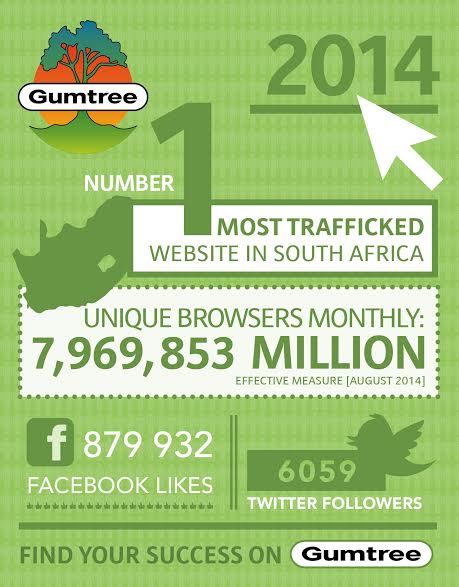