5 reasons why you should not use email to assign t...
0
comments

Clientèle launches their own network
0
comments

More than fifty of the total respondents were medium to large sized South African companies. These polled higher than both the global and Europe, the Middle East and Africa averages across several different categories (see table for categories below). Tellingly, 90% of South African respondents believe that IoT is critical for the future success of organisations in their sectors, while 88% are of the opinion that seeing real success and value from IoT requires significant financial and time investment. This is significantly higher than the global average.

Vodacom’s Managing Executive for the Internet of Things Deon Liebenberg says: “One of the most important findings from the South African companies polled in the Vodafone 2016 IoT Barometer Report is that the majority of local businesses who took part in the survey are looking at adopting IoT, and when they do so it’s not out of experimentation but rather because IoT is strategically important to them in terms of their sustainability.”

Liebenberg believes that socio-economic and business challenges are forcing local companies to be even more creative than their global counterparts in developing IoT solutions: “Our unique socio-economic challenges are a key driver of the innovation and creativity which we see in many of the IoT solutions which have been deployed in this country. This is a reason why IT leaders see the adoption of IoT as being more critical for their future success. The South African vehicle tracking market is a prime example, and one which has developed into one of the most sophisticated industries in the world. M-Health is another area where we are seeing unique technologies being used such as the Vodacom Stock Visibility Solution. This is a mobile application solution which monitors drug stock-outs in clinics. M-Health in South Africa has a very different context to m-Health in developed economies due to the societal challenges faced here. ”

Other categories in which South Africa polled higher than the regional and global averages include confidence that employees have the requisite skills to manage IoT security and that technology is sufficiently robust to safely process data.

Liebenberg says “This confidence that South African employees have the skills to manage IoT security goes back to the maturity of some of the verticals where IoT dominates in the local industry, such as the 20 year-old vehicle tracking industry. As these companies have evolved, they have invested in building capability and capacity in the components which make up the IoT value chain and have also developed a certain maturity. This has resulted in a specialist skills evolution in South Africa. This is evident in the number of new M2M connections in our market, which has a compounded annual growth rate of more than 20%.”

Overall, the 2016 Vodafone IoT Barometer Report found that, globally, 89% of companies investing in IoT have increased their budgets over the last 12 months. 76% of all companies interviewed believe that taking advantage of IoT technologies will be critical for the future success of any organisation;  63% of IoT adopters are seeing ‘significant’ returns on investment,(up from 59% in last year's Report); and IoT investment now accounts for 24% of the average IT budget, on a par with cloud computing or data analytics.  The Report also found that IoT technologies play a key role in mainstream business activities in an increasing number of companies.

Vodacom has established a dedicated IoT business unit and has also identified IoT as a key strategic growth area.  The company will continue to drive investment in IoT, both in South Africa and across the continent. 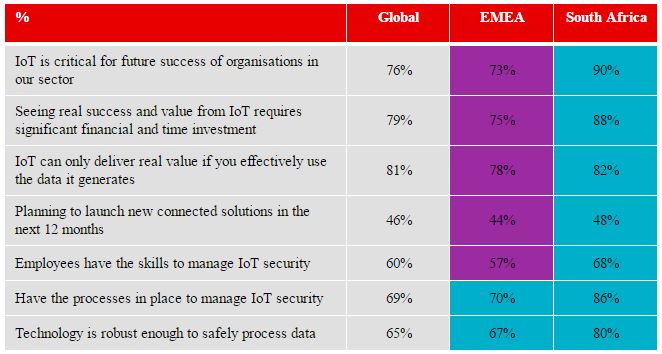 The full 2016 Vodafone IoT Barometer Report can be found here.