Mobile data usage is growing strongly across South Africa, driven by the rapid uptake of smartphones and tablets. With the increasing availability of low-cost devices, data usage has hit the mainstream and traffic volume growth in townships is running well-ahead of the average growth rate countrywide. This presents a particular coverage challenge for mobile networks, with high population density and a relative lack of formal infrastructure making it difficult to build new base stations to address this demand growth. Vodacom, however, has developed a new solution which involves retrofitting a compact base station to the roof of existing shipping container shops. 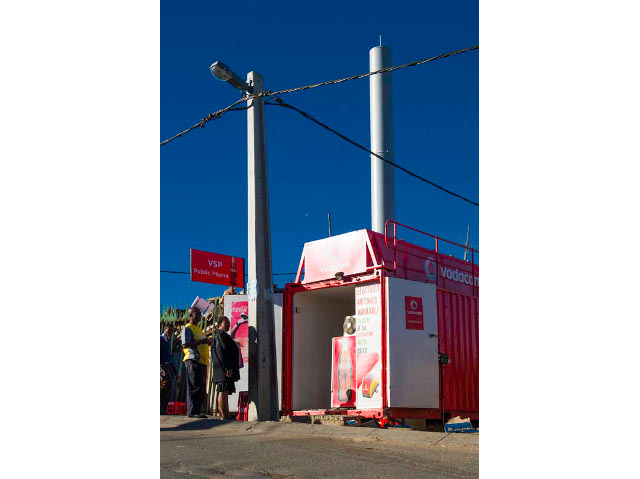 A standard mobile base station typically has a site footprint of 30 square metres or more. This includes a mast, which is usually 15-25 metres tall and supports the radio antennae that connect to mobile devices. In addition, each site has an equipment storage building to house radio and power equipment. The cost of each installation varies, but can be in the region of R1.5 million.

“We’re seeing data volumes in Gauteng’s townships almost doubling year on year, which is well-ahead of the average growth rate countrywide. Identifying and building new sites to cater for this in densely populated areas has been difficult, and on top of that site security can be an issue.

“Our engineers went back to the drawing board and developed an entirely different approach. They repackaged the base station equipment inside a compact steel structure that is then bolted to the roof of existing shipping container shops. This means that new sites can be rolled out quite literally within weeks as opposed to the typical 12-18 month lead time to build new base stations.” 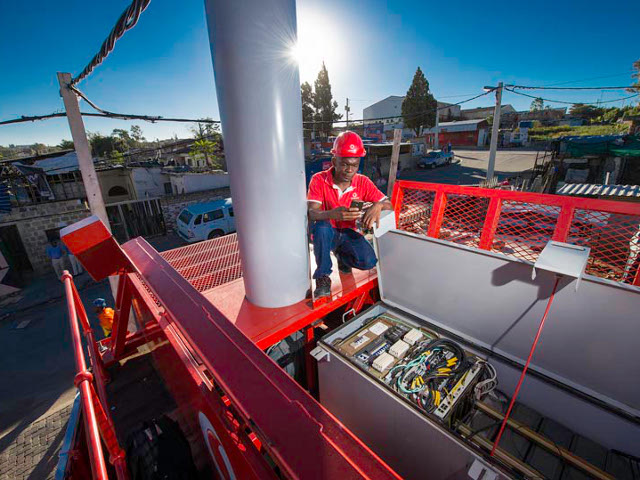 In addition to having a smaller footprint of nine square meters and being able to utilise existing infrastructure, these new base stations are more energy efficient and cost less than half the amount needed to build a traditional site.  Vodacom plans to roll out five sites as an initial test, the first of which to go live is in the Alexandra township. These test sites provide mobile coverage over a radius of up to 1.5km and can service 5,000 subscribers at peak times.

“This solution isn’t just about mobile coverage. The shops located in containers typically sell airtime, m-pesa, and telephone services. With a base station located on their roof, we’ll support the shop with an additional source of income, and they in turn provide us with added site security. It makes us part of the community.”

As of 31 December 2014, Vodacom had 16.8 million active data customers and data traffic countrywide had grown 62% year on year. The number of smartphones and tablets active on the network was 9.5 million devices, up 24% on the prior year. The average amount of data used per smartphone was 358 MB per month.