How COVID-19 propelled education into the age of t...
0
comments

Young entrepreneurs are building the future of our country. That future will be shaped, to some extent, by their values, priorities and characteristics. That’s why I was interested to see the results of Sage’s new Walk With Me report and the picture it paints of millennial entrepreneurs in South Africa.

Some of the most interesting local findings on South African young entrepreneurs include:

- 52% make time to socialise with their team at least once a week, with 23% committing to every fortnight

- 57% say Facebook is their preferred channel for brands to communicate with them, followed by personalised emails at 34%

The report, which examines the attitudes and behaviours of young entrepreneurs around the world shows that they are optimistic and put in the hours, but want flexibility over when, where and with whom they do business. They are determined to surround themselves with people who share their values and ambitions. And, they are especially good at using technology to overcome obstacles, using mobile tools to work remotely, stay in contact with co-workers, and run their business.

This generation is serious about maintaining their work/life balance, making investments in philanthropy and staying true to their personal values.

Demotivated by red tape and bureaucracy

While these stats paint a positive and encouraging picture of our local young entrepreneurs, the report highlights that they are facing many challenges.

Our research in South Africa and 15 other countries finds that 43% of young entrepreneurs say they find bureaucracy demotivating. It stops them and their businesses from being agile and competitive.

In South Africa, 30% of respondents say they are dispirited by the bureaucracy they face. What’s more 43% of South Africans (notably higher than the world average of 36%) reported that receiving late payment and worrying about cash flow is disheartening.

These statistics make it clear where government and big business can step in to help. One of the easiest and quickest ways they could make a difference is by paying small businesses on time. It seems incredible that late payment is still such a challenge for entrepreneurs in the era of Internet banking.

Disrupting the world of work

The greatest chance of success, for those looking to hire and do business with this generation, lies in forgetting the stereotypes and removing the barriers so that young entrepreneurs can grow.

Dion Chang, founder of Flux Trends has done a lot of work with organisations in South Africa that are looking to change the way they operate to better accommodate millennial entrepreneurs. The changes can seem daunting to big corporates, he says, because in many ways the new social values of this generation mean throwing out practices we’ve relied on for decades – a 9-5 work day, and the traditional desk work space, for example.

Even the prospect of studying a specific degree at university, starting a job, and sticking to that career path for the rest of your life is likely to be a thing of the past in the near future, according to him.

And he believes that it goes beyond that: we fundamentally need to rethink education, what ‘lifelong learning’ really looks like, and how to deal with the new concepts like the ‘gig economy’ (the freelance or contract model where people come together to work on a project, and then disperse afterwards).

Entrepreneurs who understand the ‘giving economy’

Sage’s research showed that millennial entrepreneurs are far more focused on creating businesses that ‘give back’ to local communities and the world. At the recent Sage Summit in Chicago, the largest event for small and medium businesses in the world, I heard Zooey Deschanel and Gwyneth Paltrow speak about the ‘Giving Economy’ and the idea that today’s consumer want more than products that will better their lives – they want to support companies that are socially conscious.

For big, established companies, this is also an important insight into how they can inspire their employees as well as their customers by having a positive influence on the community they serve.

This generation of entrepreneurs has grown up with the technology at their fingertips to make processes efficient and allow instant access to real-time information. They are therefore less accepting of outdated practices that slow things down and hold them back.

We know it takes blood, sweat and tears to turn a dream business idea into a fully-fledged reality. So, young South African entrepreneurs who are already time poor shouldn’t have to battle against practices created in an outdated business world

Established businesses that want to work with young entrepreneurs or hire them need to think about how to support them with personalised, instant, friendly experiences. In a world where only the voices of the biggest are heard, we must fight to hear the voice of the young entrepreneur. Let’s help them to really fly. 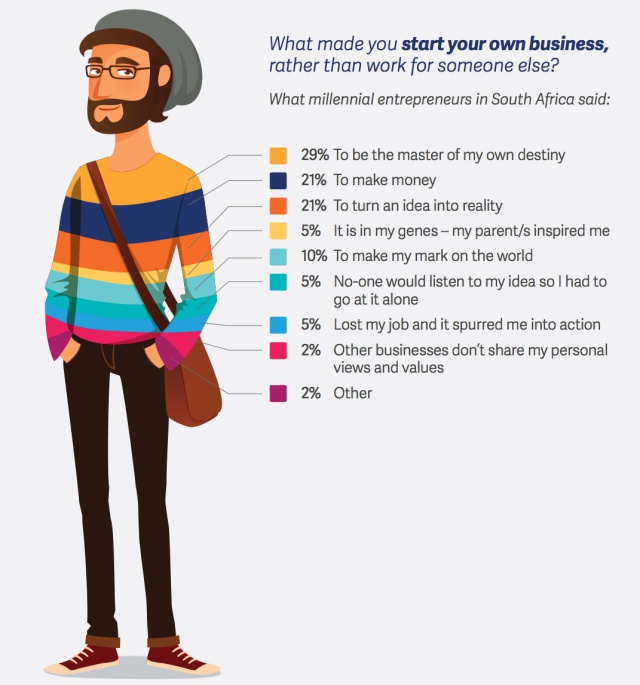