Electronic Arts (EA) has revealed its line-up of international football stars, who will assist with the launch of the latest game in its best-selling FIFA range. Headlining the group of footballers (full list posted below) is Manchester United striker Wayne Rooney and Real Madrid’s Kaká, who will be joined by stars Philippe Mexès in France, Gerard Piqué in Spain, Giampaolo Pazzini in Italy, Mats Hummels in Germany and Jack Wilshere in the UK.

These footballers will launch FIFA 12 on 30 September in South Africa and the rest of the world. They will grace the cover of FIFA 12 packaging, will be integrated into marketing as well as advertising campaigns and also be utilised in global social media activities.

For the first time ever, Arsenal’s Jack Wilshere will appear on the cover of FIFA 12 in South Africa, together with Wayne Rooney. Rooney has won the England Player of the Year award twice, in 2008 and 2009 and played for the England national team in the 2006 and 2010 FIFA World Cup.

FIFA 12 will bring new game-changing features to the genre including EA SPORTS’ Player Impact Engine, a physics engine built to deliver real-world physicality in every interaction on the pitch. The all-new Precision Dribbling functionality creates a higher fidelity of touch on the ball for better control in tight spaces, more time to make decisions on attack, as well as better control over the pace of the game.

Innovations in attack are balanced by a re-designed defending mechanism called Tactical Defending, which fundamentally changes the defence approach by placing equal importance on positioning, intercepting passes and tackling. Additionally gamers will have to contend with  Pro Player Intelligence, the next generation of artificial player intelligence and performance.

FIFA 12 also introduces EA SPORTS Football Club, a live service that is available at no additional cost and connects players to the real-world game with fresh, new content all the time. This will enable them to support their favorite club, connect and compete against their friends, as well as millions of players from all over the globe.

“This is an iconic group of footballers who all passionately play our game, and we are excited to have them speak to fans around the world about their own personal experiences playing the best sports game on the planet,” said Matt Bilbey, vice president and GM of Football, EA SPORTS. “With all the accolades FIFA 12 has received so far we are confident we have the most authentic and highest quality game we have ever created, and these superstars will play an integral role in sharing their excitement for its highly anticipated launch.”

FIFA 12 will be localised into 18 languages and available in 51 countries by the end of September. It will be available for the PlayStation 3, Xbox 360, PC, Nintendo Wii, PlayStation 2, Nintendo 3DS, PSP (PlayStation Portable), iPhone, iPad, and iPod touch.
EA SPORTS FIFA 12 was also the winner of 20 “Best Sports Game of E3” awards, including the prestigious E3 Game Critics award. 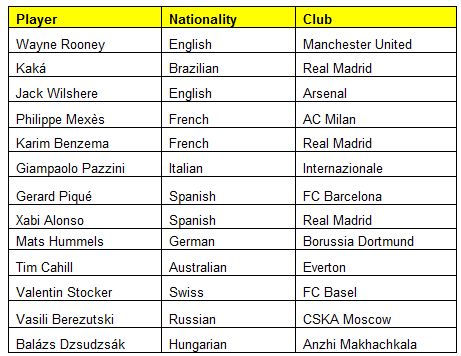