They’ve been battling through different seasons and chirped their way through Rio, now those Angry Birds are heading to space.

Commenting on the 22 March launch of Angry Birds Space, Rovio CMO Peter Vesterbacka recently told the Guardian, "It's the first time we have everything available on launch day: animation, toys, books, candy, everything. It's massive: most Hollywood movies don't have this.”

There will be an official announcement on 8 March to reveal more about Angry Birds Space, with Rovio currently only promising “innovative new gameplay,” expected to include zero gravity, and extra “surprises,” which might include super-powered birds.

The game has been designed with the help of NASA, while National Geographic is also involved in the project. Wet your appetite with the trailer below.

New Vita games in the pipeline

Hot off the news that the PlayStation Vita sold a respectable 1.4 million units in its first week, comes wind of the next wave Vita titles. According to Andriasang.com, Sony will be holding a webcast on the 9th of March entitled "Welcome! PlayStation Vita Game Heaven." Information shared will include unannounced Vita titles and Vita services amongst others.

With 25 titles available on release, there’s no doubt that an even bigger library will make the already big smile on Vita fans’ faces even broader.

There’s nothing that grinds our chops as much as receiving FarmVille requests from Facebook friends (if that is what you can call them). Luckily Zynga, developer of Farmville, CityVille and CastleVille, has now announced the Zynga Platform, a new destination for social games.

The Zynga platform will provide “new ways to play and more people to play with,”accompanied by the beta release of Zynga.com, the company’s new destination for social games. Here gamers will be able to connect with more players than just Facebook friends, complemented by a larger variety of games, developed not just by Zynga, but also third party developers the likes of MobScience, Row Sham Bow and Sava.

Zynga.com is expected to launch later this month. 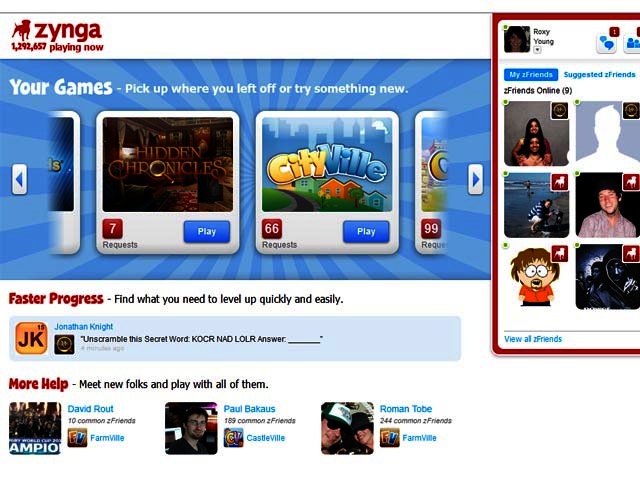 Despite rumours that Doom 4 had been cancelled, the parent company of developers id Software, Bethesda, issued a statement that the game was still in development, according to GameSpot.

In a statement, the company is quoted as clarifying "Doom 4 is not cancelled. When we are ready to talk about the game, we'll let folks know."

The rumour of Doom 4’s demise was apparently sparked by recent job losses incurred by id Software earlier this year. It left gamers confused about the fate of the game’s development, further fueled by supposedly leaked screenshots of the cancelled game by AllGamesBeta. Bethesda denied that the screenshots were genuine.

Although the story does not follow the events of Biochock 1 and 2, we expect the same eerie/charming core to be evident, as Bioshock: Infinite sets players loose in a flying city known as Columbia in an alternate 20th Century.

The first person shooter game will once again revisit the themes of utopian ideals that have gone awry, involving a fair share of plasmid powers, weapons and of course, little girls that are not all they seem to be.

Additionally, according to GameSpot, a Bioshock game for the PlayStation Vita is apparently also in the works. Hit the video below to see more.
TAGS:
Gaming News Round-upcomputer and videogamesPS VitaSonyDoom 4Bethesda
USER COMMENTS