Google has announced that it has enhanced Gmail for mobile, which will make the application “look sharper and feel smoother”. Users will now be able to touch the message list and drag it downwards and release, in order to refresh their message list and conversation on all iOS devices as well as Research In Motion’s BlackBerry PlayBook tablet. 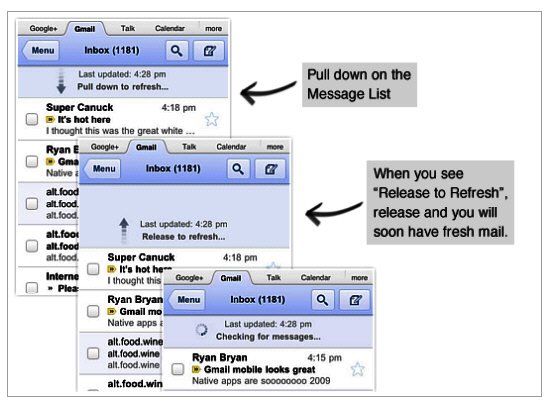 Gmail for mobile users that are employing the app on their iPhone 4, will now see it looking much sharper thanks to Gmail finally supporting Cupertino’s Retina Display (640 x 960 pixels). All the in-app icons and graphics are now shown at a higher resolution.

Menu transitions are also available. When a user taps on a conversation, taps back to the inbox, goes to the menu or goes back, their on-screen view will now slide to the left or to the right. This new transition animation might be small in scale, but it makes using the app feel a whole lot smoother.

Users can visit Google’s Gmail page on their mobile browser in order to check out the latest updates to Gmail for mobile.
In related news Google also recently released the latest version distribution figures surrounding its Android mobile operating system (OS). These figures cast light on the relative number of active mobile devices that are operating on a given version of the Android platform.
For more, follow TechSmart on Twitter or join us on Facebook.
TAGS:
GoogleGmailApplesmartphonemobile OSiPhone 4
USER COMMENTS