Only days after confirming that it was still pursuing the tablet market, and that it would be launching a Windows 8 tablet in 2012, HP has announced the release of its Slate 2 tablet, aimed squarely at users in the business, education and government sector.

The Slate 2, which runs off the Windows 7 platform, packs the Intel Atom Z670 processor and a 32 GB solid state drive (SSD), along with a battery life of six hours. As for the screen, this is a 8.9” diagonal capacitive multi-touch display, that supports touch and pen input.

The company explained that, in a bid to make typing on the device more user friendly, the Slate 2 tablet further features an integrated Swype keyboard, which enables users to enter data with one continuous finger or stylus motion across the screen keyboard.

An SD card slot is also onboard, as are two USB 2.0 ports and an HDMI port. While it’s an oft-neglected feature on tablets targeted at general users, the presence of an SD card slot (as found on the Toshiba AT100-100) on tablets is still a handy addition in our opinion.

The Slate 2 tablet also has two cameras for videoconferencing: a front-facing VGA webcam and a 3-megapixel camera on the back. 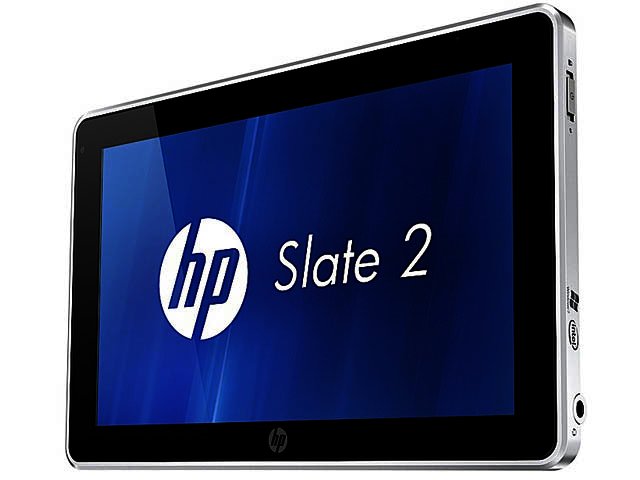 As it to be expected of any device aimed at businesses, the Slate 2 tablet has several protection measures on board. These include BIOS support for Computrace Pro, which helps protect against data theft by allowing customers to remotely delete data at the file, directory or operating system level, and keep confidential information more secure.

"HP is dedicated to the tablet PC category and continues to listen to customers and improve the product in ways that best address their business needs," said Dan Forlenza, HP’s vice president and general manager for the commercial managed IT segment, HP.

"The HP Slate includes the right mix of rich features, support for custom-built applications, and the security and connectivity needed for today's highly mobile and rigorous day-to-day professional environment," he concluded.

The HP Slate 2 tablet starts at $699 (R5600) and is expected to be available worldwide later this month. Specific details of local availability and pricing have yet to be announced.

In related HP news, Meg Whitman, HP’s chief executive officer, reported that the company has rejected a spin-off option and that it will retain its PC division.
UPDATE: We received news on 9 November that the HP Slate 2 Tablet PC retail price starts at R6599 and is expected to be available in Europe, Middle East and Africa later this month.
TAGS:
HPSlate 2 PCbusinessesIntel
USER COMMENTS