The company released its latest data indicating that the number of malicious programmes targeting mobile devices has increased 6.4 times in 2011, with a total of 5255 new modifications and 178 new families identified throughout last year. In December 2011 alone, Kaspersky Lab uncovered more new malicious programmes targeting mobile devices than over the entire 2004-2010 period.

Besides the dramatic growth in the number of mobile threats, 2011 also saw some qualitative changes. While unsophisticated, SMS Trojans are still the dominant form of mobile malware among all detected threats. Kaspersky’s data shows that this type of threat has seen its share fall from 44.2% in 2010 to 36.6% during 2011.

Backdoors, which were barely used by cybercriminals in 2010, accounted for the second most prevalent behaviour in 2011. According to Kaspersky Lab, the surge in interest in backdoors has been sparked by virus writers’ growing interest in Google’s Android mobile operating system (OS), as the overwhelming majority of detected mobile backdoors target Android smartphones.

The third most common mobile threat behaviour is spyware, which targets the personal user data and/or data about the infected mobile device.

Kaspersky Lab also noted the first case of malware being spread with the assistance of QR codes. Due to their ease of use, criminals have started to use malicious QR codes with an encrypted link leading to the same threats that other traditional URLs lead to.

Android a top target due to its popularity

The numbers of modifications and families of mobile malicious programmes in Kaspersky Lab’s records as of 1 January 2012 are shown in the table below: 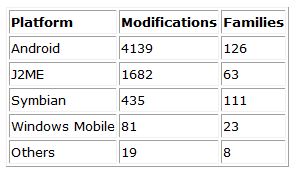