Market research firm Net Applications has made its latest monthly desktop browser stats available. Microsoft’s Internet Explorer (IE) still takes up the biggest slice of the global browser pie by claiming a 54.09% stake, which is almost stagnant compared to March’s 53.83%.

Mozilla’s Firefox browser’s share also barely budged from March’s 20.55% to 20.20% during April, but the gap between the fox and Google’s Chrome is closing. Chrome saw a very slight uptake from 18.57% for March to 18.85% last month.

Like it did last month, Apple’s Safari browser took one step back by decreasing its share from  5.07% to 4.81% during April. The fringe browsers overall haven’t shown any signs of growth, as Opera Software’s Opera stood its browser ground by obtaining a 1.63% share of the worldwide desktop browser usage pie compared to March’s 1.62%.

According to a blogpost by Roger Capriotti, director of Internet Explorer product marketing, on Microsoft’s official The Windows Blog, IE9’s user adoption rate on Windows 7-operating PCs continues its upward course on the browser stake escalator.

By March Microsoft’s IE browser had nearly breached the 35% usage mark for PCs running the Windows 7 operating system (OS) around the globe, and this increased to 35.5% during April. IE9 is followed by Chrome 18 with its share of 21%, whilst the most modern versions (11 and 12) of Firefox rounds up the top 3 with a combined 15.3% user stake. 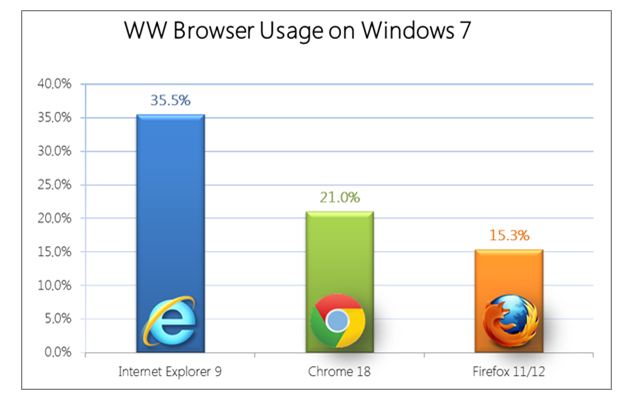 Figure: The Windows Blog
In the US a whopping 52.9% of PC owners, whose computers are operating on Windows 7, utilise IE9 as their browser of choice, with 15.1% of users opting for Chrome 18 and a further 12.5% being members of team fox (Firefox 11 and 12).