The latest monthly browser stats from market research firm Net Applications have been released. It shows that as of November, Microsoft’s Internet Explorer (IE) commands a 52.64% share of the global browser usage pie, remaining pretty much stagnant from last month’s 52.6%.

Even though Mozilla’s Firefox browser’s share is down slightly from 22.5% in October, it still keeps a firm grasp on second place with its 22.14% stake. Google’s Chrome is still on the rise from 17.6% during October to 18.18% for November.

Apple’s Safari browser might be dominating the mobile browser landscape thanks to the popularity of the iPhone and iPad, but in terms of its desktop browser market share it comes in at a distant fourth place with its 5% market share. Opera Software’s Opera browser keeps to the browser fringes, as it employed by 1.55% of internet surfers.

Redmond trumpets the success of its browser

According to a blogpost on Microsoft’s official The Windows Blog by Roger Capriotti, director of Internet Explorer product marketing, the usage share of Internet Explorer 9 (IE9) on Windows 7-operating computers worldwide is now higher than all versions of Chrome and all versions of Firefox. In fact, it is second only to the company’s IE8 web browser and Capriotti stated that IE9 will soon be the number one browser on Windows 7 in the US.
In related news from the browser front Mozilla recently announced the release of an update to Firefox (Firefox 8) for Windows, Mac, Linux and Firefox for Android. 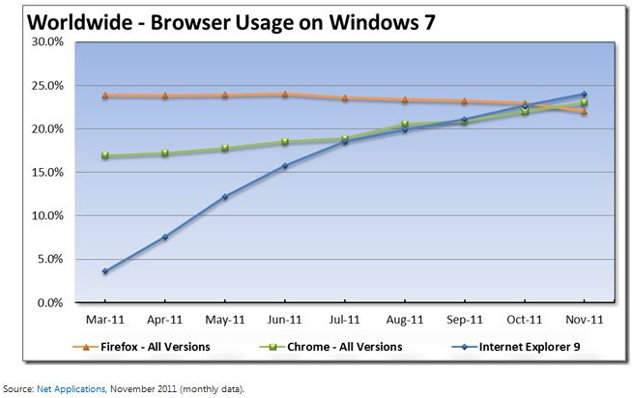