The latest monthly browser stats from market research firm Net Applications have been released. It shows that as of October, Microsoft’s Internet Explorer (IE) commands a 52.6% share of the global browser usage pie, which is down from 54.39% last month.

Mozilla’s Firefox browser keeps a firm grasp on second place with its 22.5% stake, whilst Google’s Chrome is still on the rise from 16.2% in September to 17.6% during October. Also pushing the up button on the browser usage elevator is Apple’s Safari, which is rising from 5.02% to 5.4%.

According to a blogpost on Microsoft’s official The Windows Blog by Roger Capriotti, director of Internet Explorer product marketing, Internet Explorer 9 (IE9) has claimed a browser share of nearly 35% on PCs running Windows 7 in the US. Chrome comes in second with a share of 14.3% whilst Firefox claims an 11.8% stake. Globally, IE9 has overtaken Chrome and is on the verge of knocking Firefox off its silver perch, to become the second most used browser after IE8. 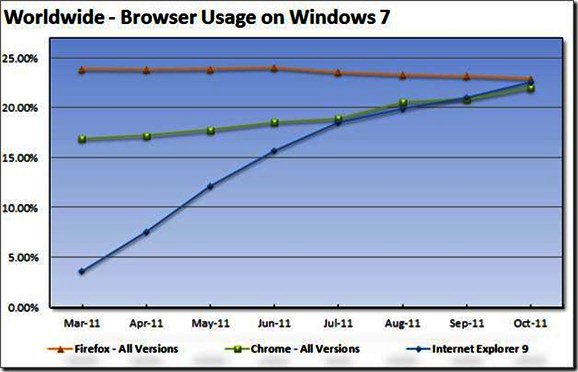 And in the mobile browsing space?

In terms of mobile browsers, which is employed on smartphones and tablets, Apple’s Safari browser is king thanks to the popularity of the iPhone and iPad. It cemented its place on the top by growing its share from 55.59% to 62.17%.

Due to the popularity of the Android platform, the Android browser has replaced Opera Software’s Opera Mini browser as the second most utilised mobile browser with a 18.65% stake, up from 16.3% in September. Opera’s Mini is down from 18.92% in September to 13.12% in October, whilst the Symbian browser’s usage has also slid from 4.7% to 2.55% currently.
Net Applications also stated that due to last month’s multi-day Blackberry service outage, as well as a “large number of Blackberry users switching to the iPhone 4S and Android”, the BlackBerry browser’s share was reduced from 2.68% to 2.04% during October.
TAGS:
Microsoftbrowser warsweb browserMozillaFirefoxChrome
USER COMMENTS