Mobile gamers who were convinced that Nintendo would announce a larger 3DS just had their expectations vindicated, as the company announced that a larger 3DS is indeed, on its way.
This despite the fact that a earlier this month, Nintendo’s Shigeru Miyamoto stated that he was “satisfied with the 3DS hardware as it is, while asserting that it was  “the best for this generation of portable gaming devices.”
At that point, the legendary game developer and Nintendo executive further noted that the Japanese company was always looking to the future when it comes to gaming hardware. “What we’re thinking about right now is probably going to be for a future generation of handheld,” he said at the time.
Reverse, reverse!
Apparently, this doesn’t mean that the company was averse to making a larger Nintendo 3DS, possibly still considering it to be part of the same family, rather than an entirely new creature.

Named the 3DS XL, the newly announced device will boast a 4.8” top screen (which is more comparative with the Vita’s 5” offering) and 4.18” bottom screen, up from the 3DS’s 3.5” and 3” top and bottom screen respectively.

Nintendo pointed out that its screen size had been increased 90% as compared with the current 3DS. According to Kotaku, battery life will also receive a boost, up to between three and a half and six and a half hours for 3DS titles and between six and ten hours for DS (non-3D) titles. 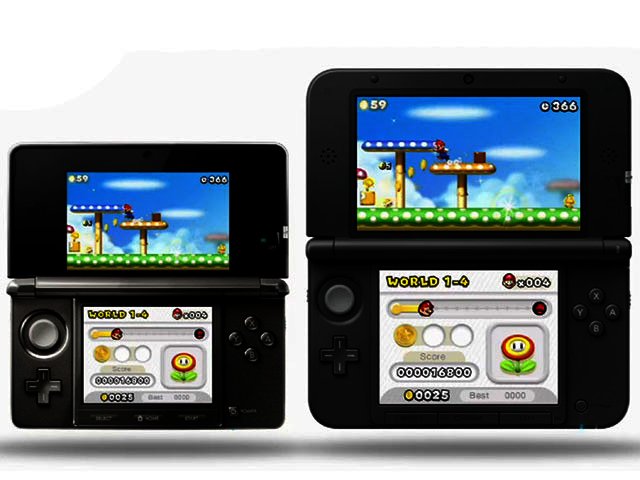 The 3DS (left) and the 3DS XL (right) side by side show that there is a significant
size difference between the two.
A shift, but still no second stick

Strangely though, it appears that the 3DS XL will still not boast an extra analog stick, which was one of the complaints made about the original 3DS, even though this was addressed by an external addition to the console.

Nintendo’s steroid-induced 3DS will sport three colour choices: silver and black, white, and red and black. Although it is expected to touch down in Japan and Europe at the end of July, and towards the middle of August stateside, there’s no word as yet as to local availability or pricing.
To the point
We can’t say though that we were displeased with the announcement; while we liked the DSi, we loved the DSi XL, whose increased screen real estate also meant great enjoyment of DS titles at the time.

While many were convinced that if any 3DS announcements were to come, they would surely have been made at the Electronics Entertainment Expo, the new announcement points to a fact that Nintendo still marches to the beat of its own tune, and the Japanese company knows how to surprise us when it wants to.