Many Nokia fans have been hotly anticipating the announcement of the company’s first Windows Phone Mango operating smartphones, since the Finnish phone giant unveiled its partnership with Microsoft way back in February. The wait is now over since the launch yesterday of the Nokia Lumia 800 and Lumia 710 smartphones at Nokia World 2011, currently underway in London.

Wi-Fi 802.11 n, Nokia Drive for Lumia satellite navigation and Bluetooth 2.1 are onboard, as well as Carl Zeiss optics for the 8 MP auto-focus snapper with dual-LED flash that can record HD-ready (720p) videos. There’s ample on device storage available with 16 GB of internal storage as well as a further 25 GB of free cloud-based storage coming courtesy of Microsoft’s SkyDrive.

Nokia’s Lumia 800 will be available three colours (just like the N9), which are Cyan, Magenta or Black, available within France, Germany, Italy, the Netherlands, Spain as well as  the UK in November. It is also scheduled to be available in Hong Kong, India, Russia, Singapore and Taiwan before the end of the year. No local release details are available yet, but Nokia did state that the mobile will be launched in further markets during early 2012.

The Nokia Lumia 710’s design corresponds more to that of the C7 and 701, with this mobile measuring 119.0 x 62.4 x 12.5 mm and weighing 126 g. It is powered by the same Qualcomm chipset that does duty in the Lumia 800 and also operates on the Windows Phone 7.5 Mango mobile operating system. To access this smartphone’s features you utilise the 3.7"  (480 x 800 pixel resolution) ClearBlack TFT display that should ensure that the info on the screen remains readable even in bright sunlight, as we saw on the E7.

A 5 MP auto-focus camera with an LED flash will likely do an excellent job of capturing stills, but is also capable of recording HD-ready (720p) videos at 30 frames-per-second. The Lumia 710 sports half the internal storage (8 GB mass memory) of the Lumia 800 and has no slot to expand via microSD card. Also onboard is Nokia Drive for Lumia offering turn-by-turn voice-guided navigation, 512 MB of RAM, 3G HSDPA, Wi-Fi 802.11 n and Bluetooth 2.1 + EDR.

The Nokia Lumia 710 will be available in Hong Kong, India, Russia, Singapore and Taiwan towards the end of this year, with other markets joining early in 2012. No local release details are available as yet.

In related news Nokia expanded on its Symbian running family this month, with the introduction of the Symbian Belle-powered Nokia 603. 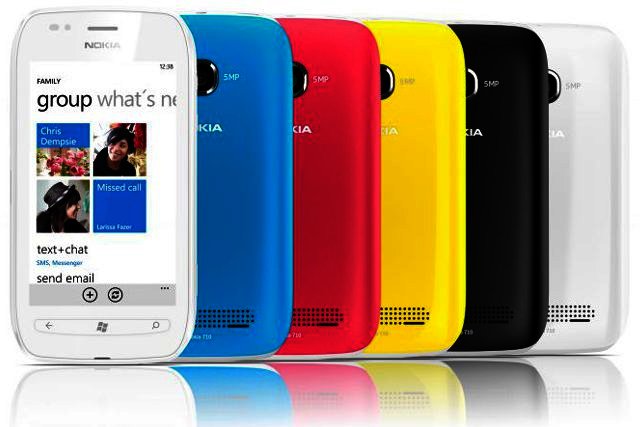