Continued from Part 1
At the Samsung Forum 2012, held at the International Convention Centre in Cape Town, we fully expected to hear more about the company’s plans for its Galaxy Tab range.
On that front, Samsung appears to be pursuing the tablet market as aggressively as ever.
Paulo Ferreira, the head of enterprise mobility, began by reviewing 2011, in which the company launched a broad range of devices in several form factors, including the Galaxy Tab 10.1, 8.9, 7.7 and Galaxy Tab 7 Plus.
Take two tablets and call me in the morning
In the year ahead, users can expect to see the Android Ice Cream Sandwich update (unfortunately, no firm timeline was given), along with successors to the 2011 Galaxy Tab 10.1 and 7” devices, named the Galaxy Tab 2 10.1 and Galaxy Tab 2 7”, respectively.
Ferreira indicated that the new devices will offer faster response times as well as an enhanced and more intuitive TouchWiz user interface.
Additionally, the devices should offer improved web browsing, courtesy of the Chrome for Android browser which will be available on both new tabs. While indepth specifications were not given, and curiously no mention was made of the Galaxy Note 10.1, Ferreira alluded to enhanced content hubs for games and video.
Perhaps of greater interest is the company’s plans to bring more than 1000 video titles to its video hub in 2012, which users will be able to stream and download, and even start playing while the movie is in the process of being downloaded.
Furthermore, AllShare Play will enable users to start watching content on their tablet in their own home, and then take it to a friend’s house and continue watching it on his TV using the device. 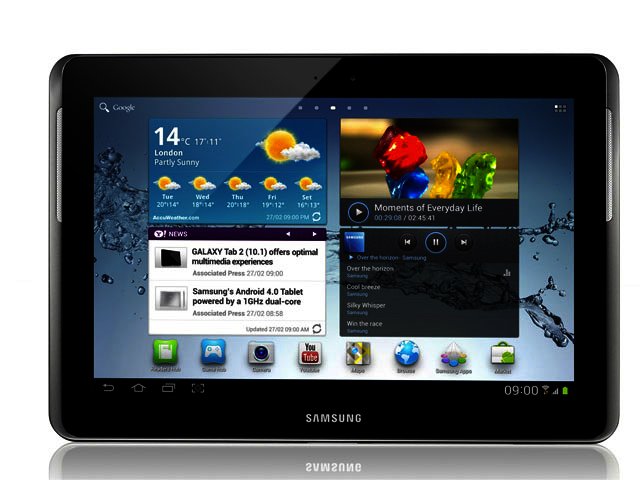 The successor to the Galaxy Tab 10.1, the Galaxy Tab 2 10.1.
Perfection, improved
Another highlight focused on the new Series 9, which at 12.9 mm and 1.16 kg is lighter and thinner than its already svelte predecessor.
Thierry Boulanger, the director of IT solutions at Samsung, elaborated that the new notebook boasts a 15” display crammed into a 14” chassis of sandblasted aluminum. Boot up times have also been improved, with the new notebook ready for action from a powered off state in 9.8 seconds and wake from hibernation in 1.4 seconds (as compared to the previous model which powered up in 15 seconds and woke in 3 seconds).
Additionally, the notebook will apparently offer ten hours of battery life on a single charge and a larger 256 GB solid state hard drive. He also revealed to TechSmart that changes have been made to the new Series 9 in response to user feedback. Gone are the flaps under which the USB ports previously hid, while a sturdier powerjack connector has been implemented.
Users can also expect Core i5 and Core i7 configurations, along with up the 8 GB of memory. Boulanger stressed though, that the company did not want to position itself as an entry level player, nor did it intend “playing at the lower end of the market.”
He added that the new Series 9 was being positioned instead as a premium product, as the company believed that customers would be prepared to pay a little more if they could see the value they were receiving.
To this end, the price includes a three year warranty with the option to extend it to four or five years. That being said, it’s expected to become available in April for between R11 000 to R13 999, depending on the configuration. 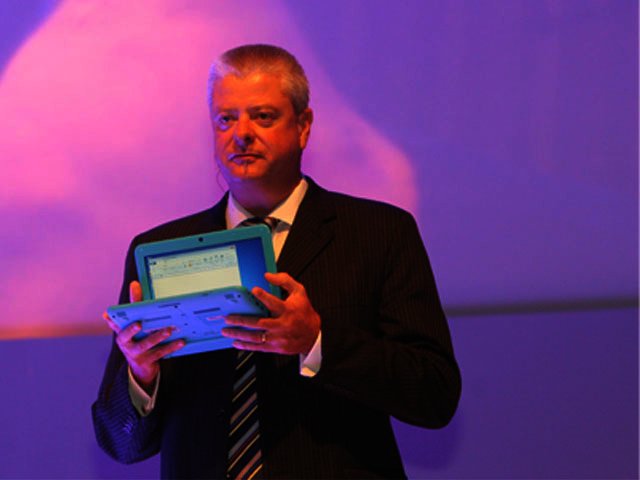 Thierry Boulanger holds the rugged ClassBook netbook,
built for students on the African continent.
Built for Africa
Another prominent theme of the Forum centred around producing products that took into account the unique needs of the African continent and market.
Samsung’s chief operating officer, George Ferreira, elaborated that heat, dust and power issues were some of the challenges faced by the continent. He continued that the durability of their products as well as extending their lifespan were essential.
To this end, the company announced several African focused developments. These included SurgeSafe Plus which is intended to answer the problem of power surges damaging TVs used across the continent, an affordable smartphone; the Galaxy Pocket, which uses Google Maps to inform users where the nearest police and fire services are relevant to their location; and the rugged ClassBook netbook for students, which can survive falls up to 70 cm and boast ten hours worth of battery life.
To the point

“Products built for Africa must be superior to those built for other markets, because they require levels of durability and reliability that won’t let users down under harsh conditions,” explained KK Park, the president and chief executive officer of Samsung Africa.

He added that this required breakthroughs in technology, of which we bore witness to more than one. Inspiring, indeed.