Samsung has introduced the NX200 camera into South Africa, which is the follow-up to the NX100 (review here). The NX200 (see video below) comes as mirrorless camera systems, featuring a smaller body with an interchangeable lens system, become ever more prevelant thanks to the recent introduction of the Nikon 1 series of cameras.

The camera incorporates a 20.3 megapixel APS-C CMOS sensor developed in-house by Samsung. APS-C sized sensors are commonly found in DSLR cameras, and are larger in size than those used in the Micro Four Thirds mirrorless standard as well as the Nikon 1 range. 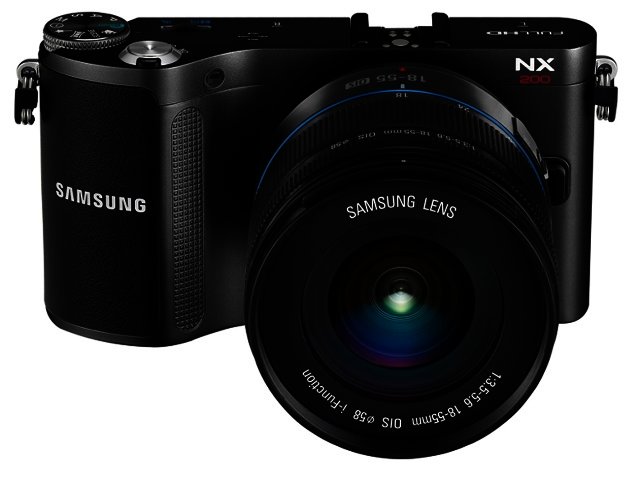 The NX200 is Samsung's new mirrorless camera
To allow for high speed capture, the NX200 achieves 100 ms Advanced AF speed, while speed is also factored into its seven frames per second continuous shooting ability.In addition, the camera’s wide range from ISO 100 through to 12800 (the NX100 only covered till 6400) will provide good detail, even in dark environments or when capturing still images of moving objects.

The NX200 also features 1920 x 1080 video recording at 30p (H.264) HD movie recording, along with stereo sound and a dedicated video record button. All this is incorporated into a compact and sleek body with a metal design, which is now also rubber coated.

Just like its predecessor, the NX200 enables state of the art usability through Samsung’s i-Function 2.0 lenses, which allow the user to control a range of parameters from the lens without having to take their eye off the shot. The NX200 is fully compatible with the wide range of nine different i-Function lenses, which enable toggling between shutter speed, aperture, EV, WB, and ISO quickly and easily through the button and ring on the lens.

With the upgraded i-Function 2.0 on the NX200, users can control six different Smart Filters and the intelli-Zoom function from the lens whilst in Lens Priority Mode. New lenses for the i-Function system include 18-200mm, 16mm, 60mm and 85mm focal lengths.

Mark Geldenhuys, business leader for Digital Imaging at Samsung Electronics South Africa, says: “The NX200 is the next step in providing the ambitious amateur with first-class picture quality through the combination of professional-standard features such as a 20.3 Megapixel APS-C CMOS sensor, high speed capture, wide-range ISO and HD movie capabilities. With technology like this built into a stylish and compact body, the NX200 is the ultimate tool for achieving professional quality in a compact camera.”

What you'll find on top of the NX200
Smart filters, Magic Frame

One of the key ways in which Samsung’s NX200 stands out is by making it easy for users to realise their own creativity through a range of fun and easy-to-use features and settings. The camera features ten different Smart Filter effects, six of which can be easily accessed through the i-Function lens, allowing users to capture a uniquely creative image of their object without having to take their eye off it to change the filter. The new NX200 further includes Magic Frame technology, which enables one to encapsulate their pictures with thirteen different frames, from magazine covers to holiday themes for fun sharing of images with family and friends.

With its Smart Panel, the NX200 makes taking perfect pictures simple and fuss-free, even for first-time users. The high-quality images captured can be viewed on the 3.0” (307 200 pixels) AMOLED display. There is also intuitive control via the camera’s Smart Panel which features a Hot Key, enabling users to jump easily to key functions without the need to scroll through confusing menus to get to their desired shot.