Never one to be left without something new up its sleeve, Samsung recently unveiled an enhanced Series 7 Chronos, as well as a Series 7 Ultra ultrabook.
While the enhanced Series 7 Chronos is intended to “deliver professional performance in a thin and light form factor”, the company explained that the Series 7 Ultra boasts enriched computing power, graphics and touch capability.
The Series 7 Chronos is the workhorse of the duo, aimed at offering professional performance for those vested in content creation. To this end, it sports an Intel quad-core processor with up to 16 GB of memory, and dedicated 2 GB of graphics memory along with up to 1 TB of storage.
Also onboard is a 15.6” full HD display (1920 x 1080), with 300 nit brightness and JBL optimised speakers, while battery life (with the extended battery) will apparently come in at an impressive eleven and a half hours.  Additionally, the notebook appears to be no laggard - waking up in as little as two seconds and booting up from a powered off state in under twelve seconds.
Much like on its predecessor, the notebook has a full aluminium body, although, it will be thinner and lighter than the previous iteration, with a slim 20.9 mm chassis. 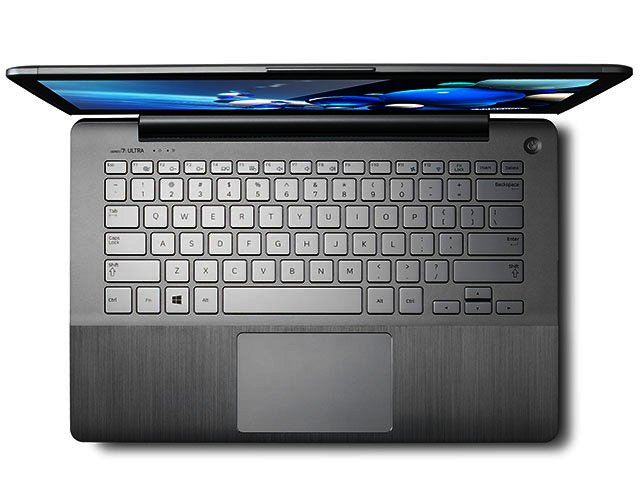 Samsung has added an ultrabook to its Series 7 line, in the form of the 13.3" Series 7 Ultra.
Series 7 meets ultrabook
While the Chronos aims at content creators, the 13.3” Series 7 Ultra – which has the distinction of being the first ultrabook in the Series 7 line - picks up the slack for those whose tastes run to multimedia consumption.
It similarly offers a full HD display (1920 x 1080), JBL optimised speakers, and a discrete AMD graphics solution. However, the company elaborated that at 350 nit, this ultrabook’s display is brighter than previous models, while boasting a 178-degree viewing angle, which is intended to enable users to more easily share multimedia on the device with friends.
As for its innards, expect to find Intel Core i5 or i7 processors and up to 16 GB of memory, while storage is catered to via an up to 256 GB SSD of storage. The latter further affords a boot up time of six seconds, while battery life tops out at a very respectable eight hours.
Sweet music to our ears is that Samsung has not neglected to included backlighting on both machines’ keyboards. The ultrabook though does have one other trick up its sleeve, as it will be available with 4G LTE connectivity. Both offerings offer Windows 8, however, while the ultrabook has a touchscreen, the Chronos 7 does not, which we hope means it will be downgradable to Windows 7.
To the point
Along with announcing the new devices, we were happy to see Samsung South Africa getting an early start at hinting what general users can expect from them in the year ahead.
“2012 was a definitive year for Samsung’s PC business – we expanded our lineup, taking advantage of the new form factors and consumer demand. This led to significant growth in the Industry,” said Mike Van Lier, business leader for IT Solutions at Samsung South Africa.
“2013, we will continue to focus on innovation delivering products that fit into customer lifestyles while maintaining Samsung’s high-end design and performance standards. The new Series 7 Chronos and Ultra products are just two examples of what you can expect to see from us throughout the year.”

While price and availability has not yet been confirmed, you can be sure that we will be following up on the new offerings, and hopefully receive them for full reviews as they become available.