Sharp has launched the ILED70, a 70” interactive display, in South Africa, which brings with it a new infrared touchscreen technology, aimed primarily at businesses and educational institutions.

The company explained that the screen, which boasts a full HD resolution of 1920 x 1080 pixels, is intended to make it simple to exchange knowledge between several people simultaneously.
This is accomplished using Sharp’s Infrared Detection System, which the company asserts improves touchscreen response and enhances its capability to integrate handwritten notes.
The company explained that the Infrared Detection System comprises various infrared sensors that rapidly and precisely detect the position of the finger or touch pen. The ILED70 also has a Dual Touch Function, which enables users to scroll through content by brushing two fingers up and down the screen, or zoom in and out of content by spreading or pinching their fingers. 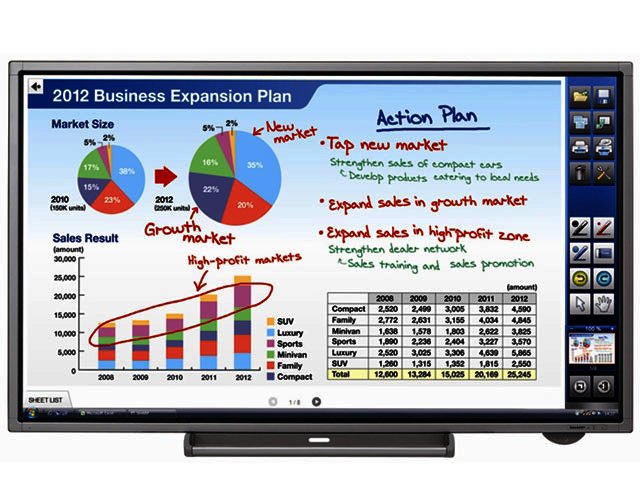 The TV is envisioned as being used as a convenient way to share digitally handwritten notes and
digital content, with numerous people simultaneously.
Tablet for the boardroom
“Users can write and draw directly on the screen with the aid of the touch pen or simply with the finger. The displayed images can be enlarged or rotated, and any handwritten notes can be cut and pasted wherever they’re required. After making these adjustments, the final screen display can be saved, printed or emailed directly with a single gesture on the board,” elaborated Shaun Andrews, the business development manager for Sharp South Africa.
“For example, the latest status of discussions or brainstorming sessions can be simply saved and then made accessible to a selected group of people,” he continued.
He added that the interactive LED TV is more than a white board, but rather can serve as a 70” “tablet” in a company’s boardroom. Additionally, the device can be used as part of a videoconferencing system, where people in different locations can confer on-screen or even share screens in real time. Any file format can be imported and hard copy documents can be scanned directly to the board.

Andrews pointed out that the size of the monitor at full HD resolution, along with its sensitive interactive display, makes the unit ideal for teaching in schools and universities at multiple locations simultaneously, giving interactive presentations in boardrooms and conference centres.
The ILED70 can be connected without problem to Sharp printers, scanners and to the users’ network. Additionally, it can display scanned images which can then be saved and printed, complete with handwritten comments.
To the point
The device is certainly innovative, and somewhat reminiscent of LG’s Plasma PenTouch TV, which made its appearance towards the end of last year. However, the prime difference seems to be that while the former was targeted at the general user, Sharp’s offering seems to be aiming at a more niche market.
The company has not yet provided a price for this gargantuan screen. However, we will update this once it is confirmed.
TAGS:
SharpTVsILED70interactive displaysShaun Andrews
USER COMMENTS