According to the firm’s tablet and touchscreen strategies (TTS) service, Apple managed to increase its share of the global tablet market to a whopping 68%, up from 62% the previous year. This marks the Cupertino-based iPhone and iPad maker’s highest level for almost two years, as the company shipped a record 17 million iPads within the last quarter.

Cupertino continues to dominate the tablet landscape, despite a growing number of  Android-based media tablets, with the iPad’s worldwide tablet share reaching its highest level since Q3 2010.

Tablets based upon Google’s Android mobile operating system (OS) captured 29% share of global tablet shipments in Q2 2012, remaining static as Android’s slice of the tablet pie was the same during Q2 2011. It is worth noting though that Android tablet shipments increased globally by over half to 7.3 million units though.

According to SA, Android tablet OEMs (original equipment manufacturers) have yet to make a serious dent in Apple’s tablet sales, despite high expectations from firms such as Amazon, Samsung, and Asus. The analytics firm attributed the mixed performance to unspectacular hardware designs, limited uptake of cellular-enabled models as well as a modest number of tablet-optimised services. 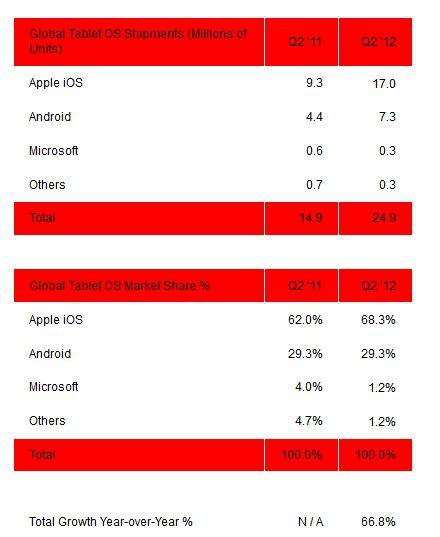 Table: Strategy Analytics
Other findings from the research include:
In related news, SA also recently revealed that Apple has generated a staggering $150 billion of cumulative revenues for its iPhone range, within the first five years since launch in June 2007.
TAGS:
MicrosoftAppletabletStrategy Analyticsmarket researchsales figures
USER COMMENTS