2010 was a busy year on the smartphone OS (operating system) front, with new releases coming from Apple, BlackBerry and Nokia. It’s not over yet, seeing that yesterday saw the official launch of Windows Phone 7 in South Africa at a function held in Newtown, Johannesburg. The first handsets carrying the new OS to hit the SA market will be HTC’s Mozart and Trophy (exclusively on Vodacom), arriving either late November or early December.

Microsoft’s new OS seems like a significant departure from the previous incarnations of this often criticised OS and seems to put them on track to compete against Android 2.2, iOS 4 and BlackBerry 6 OS.

We had the opportunity to briefly play with the OS on two new HTC phones and we can report back that we liked what we saw. A new, block-based home-screen gives one easy access to most often used info, such as missed calls, new messages and emails as well as social networking contacts. Although not that exciting design-wise it does provide a one touch area to your most significant data.
From there one progresses to the new ‘hubs’ which is simply areas to deal with people (contacts, friends on your social networks and Windows Live), pictures, email, music and video (via Microsoft’s Zune client) calendar and Office. Office deserves special mention, since it actually seems possible to edit and create documents on the interfaces provided for Word, Excel and PowerPoint. (More below) 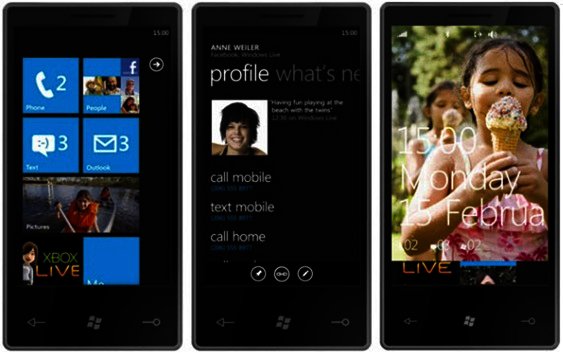 The new OS will find a lot of love from users already making use of Microsoft products such as Outlook, Hotmail, Windows Messenger and other services from Windows Live, since these seem to be pretty well assimilated in the Windows Phone 7 experience.
Overall we can report back on a smooth touch-screen experience; a clear and easy to use user interface; and, unlike previous Windows Mobile renditions, the back-end looks well integrated in the phone’s setup. Overall it looks like a well thought out OS, ready to take on the big guns.
Stronger stance on specs
Unlike previous editions of Windows for Mobile, Microsoft has taken a must stronger stance on the specifications for Windows 7 phones, with original equipment manufacturers having to certify technology used for any new handsets. The new phones are for example required to have at least a 1 GHz processor present to ensure smooth operation. From our previous experiences with lagging Windows phones, we believe this is a step in the right direction for Microsoft.
Generic phones?
Apart from certain design choices for the look of the phones, the new OS does not provide handset manufacturers with a lot of room to play with inside the OS itself. From what we could gather from representatives of handset manufacturers present at the event, “skinning” of the OS is not allowed. So manufacturers cannot change the look of the OS, like HTC does with “Sense” for example on their Android phones. Whether this will deliver bland generic smartphones remains to be seen.
As mentioned HTC will be the first to market with the new OS in SA, with Samsung and LG following with devices scheduled for the first quarter of 2011. No retail prices are known yet.
TAGS:
htcwindows phone 7microsoft
USER COMMENTS