Hyundai has come a long way with its cars in a short space of time. Merely mentioning one as a viable option in the C-segment a couple of years back, would have resulted in the value of your opinion on cars going into freefall faster than Felix Baumgartner’s record-breaking skydive.

However, the new generation i30 already impressed us way back in August at its local launch. The sublime “fluidic sculpture” styling of the i30 immediately caught our eye, making the latest iteration a far more appealing vehicle than its conservatively penned predecessor ever dreamt of being.

Three months after its South African debut, the i30 still manages to catch a fair amount of envious stares from passers by, which also speaks to how gracefully the look of this car will age over time, we feel.

On the inside, the captivating exterior is complemented by a classy cabin that is spacious and well laid out. The layout of all the controls on the dashboard - which includes the buttons for the audio system and aircon - is practical, elegant and simple, with everything well within the driver (or front passenger’s) reach.

The controls are also easy to use with a more straightforward layout, compared to the fussy dash of the Ford Focus and almost over the top interior of the Honda Civic hatch, in which you feel a bit like Captain Kirk readying to take command of the U.S.S. Enterprise.

Even though the interior features plenty of plastic, it still comes across as sturdily constructed and premium enough to go toe-to-toe with (but not beat) the cabin of the class leading Volkswagen Golf. 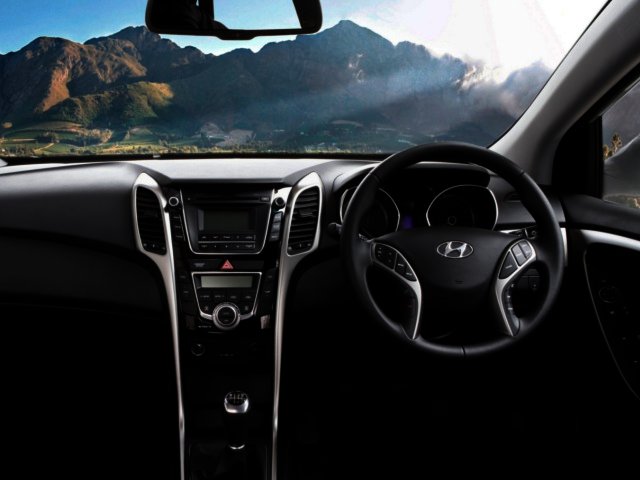 The cabin is classy, spacious and boasts a well laid out dashboard.
Easy rider

The new generation Hyundai i30 comes in a choice of two engines, both of which are geared towards delivering more power, better fuel efficiency as well as fewer emissions. These are a 1.8-litre four-cylinder petrol engine that delivers 110 kW at 6 500 r/min and 178 Nm of torque at 4 700 r/min when pushed to the limit, and a slightly more economical Gamma 1.6 four-cylinder engine (sorry diesel fans) that produces 95 kW at 6 300 r/min and peak torque of 157 Nm at 4 850 r/min.

We drove the former, which is capable of bringing 100 km/h up on the speedometer in around ten seconds, and propel its big, 1.215 ton Korean derriere to an illegal terminal velocity of 190 km/h. In terms of fuel economy, we averaged just under nine litres per 100 km, but managed less than seven litres per 100 km whilst cruising on the highway.

Overall, the steering and handling was very competent, with the ride quality leaning towards comfort more than dynamically sporty as with a Focus. Within the congested city streets of Pretoria, the powerplant of the i30 felt punchy enough, whilst gear changes (on the highway and in town) remained slicker than a fast talking politician looking to worm his way out of corruption charges.

On the highway, we did find ourselves wishing for a bit more overtaking oomph though. The steering is super light, which is a delight when you are parking, but not so much while driving at 120 km/h on the N1. Luckily, Hyundai has included its Flex Steer system (accessed via a button on the steering wheel) on the i30 that supports three operating modes, namely comfort, normal and sport.

This new system is employed to vary the level of steering assistance and feedback you get, and align these to the prevailing driving conditions. ‘Normal’ will be used most during your daily commute to work. ‘Comfort’ is called to action when you crave the lighter than air steering whilst guiding the car into a tight parking space at the mall.

‘Sport’ is meant for those occasions when drivers feel like relieving some pent up work-induced stress by burning rubber, and we found ourselves engaging it for highway driving. This, as it increases the steering feedback ever so slightly, delivers a more ‘weighty’ feel that gave us a little more confidence at the higher speeds. 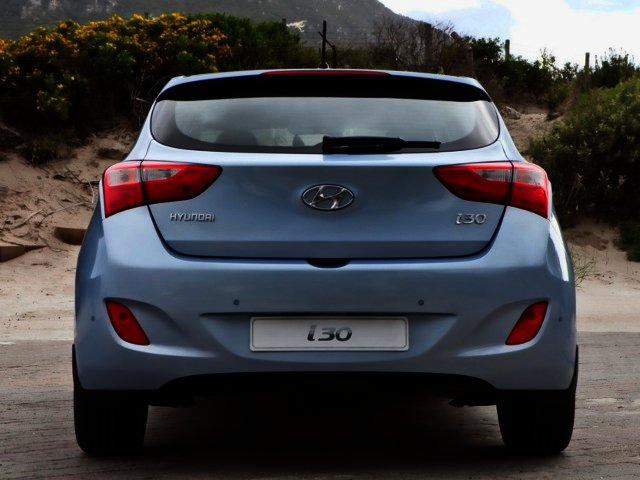 However, as with all the other Hyundais, the i30’s biggest selling point is in the impressive list of standard kit you get with the car. The model we got to drive came with a full accompaniment of six airbags, as well as all the expected bells and whistles such as central locking, power steering, electric windows and mirrors, an MP3-compatible audio system that caters to both USB as well as Bluetooth connectivity, satellite controls on the steering wheel, and parking sensor for the rear amongst others.

You won’t get these with your Golf, and ticking off features the likes of cruise control adds about R3 000, whilst park distance control ups another R4 600 to its asking price. This serves to highlight the immense value proposition that the i30 represents for prospective hatchback buyers.

It might be an alluring value proposition but the i30 is equally adept at luring jealous gazes of curious onlookers and passers-by.
To the point

Due to its sublime styling, comfortable cabin and ride, Hyundai’s i30 manages to impress in all aspects, culminating in a very worthy rival for the Golf and co. If you make a list of pros and cons on paper it will more than likely trump its rivals, including Opel’s Corsa, the VW Golf and Ford’s Focus, especially when it comes to specification value for your hard-earned money.

On paper, the final decision over which vehicle to go should be a simple one. However, linking yourself in financial matrimony to a new vehicle over the next 4-7 years (longer than a lot of marriages nowadays) is most definitely not that simple.

The only real question standing between you and a new i30 is this: Will you opt for this brilliant car over the segment leader and benchmark - Volkswagen’s Golf? Answering this question is up to you, but for our part we can say that choosing the former will not result in you turning greener than the Hulk every time the latter drives near you on the open road.

Very comfortable and easy to drive on road.
Gorgeous car to behold.
Fit and finish of the interior.

High boot means you can’t see objects behind you while backing up.
Needs a bit more overtaking oomph on the highway.
TAGS:
Hyundaicar reviewhatchbackHyundai i30
USER COMMENTS