Since its inception way back in 1987, the Street Fighter series has been hailed by many to be the king of fighting games, thanks to solid gameplay, deep level of strategy and of course its nostalgic arcade roots.

The series underwent a massive revival when Super Street Fighter IV was released in 2009 on home consoles (or 2008 if you happen to catch it in an arcade). The new game introduced a gorgeous animated art style; all the Street Fighter greats as well as a new villain to the mix, ensuring the series' continued prosperity in the modern gaming scene.

Continuing on its recent successes, Super Street Fighter IV 3D Edition, while not a brand new game in itself, may be the most competent handheld fighter around today. This title is not to be confused with a quick handheld port, in fact it brings the complete console Street Fighter IV experience to the 3DS, alongside all 35 characters, their full movesets and all the game modes you've come to know and love. 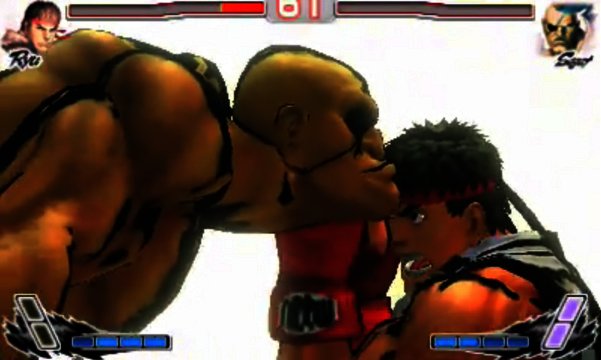 The thing is, fighting games are unique in that their enjoyment can be utterly ruined simply by introducing a clumsy control scheme. And while virtually all fighting game veterans have now cashed in their slot machine skills for a console controller, it's still somewhat of a different story when dealing with a handheld.

Luckily the Nintendo 3DS makes for a decent Street Fighter control pad, with enough room for your fingers to do the pounding without their frantic movements obscuring the screen itself. The 3DS's comparatively cramped layout does take a bit of getting used to, but it's only a matter of time before you've completely forgotten about any comfort woes.

As you would expect, character movement is controlled via one of the 3DS's two directional control pads, the analog-style circle pad or the more classic D-pad. Both of these do a fine job of navigating your fighter around the ring, with the final choice depending more on player preference than anything else.

The A,B,X and Y buttons are used to dish out light and medium kicks and punches, while the shoulder buttons launch heavy attacks. As in all fighting games the truly amazing moves are unlocked via executing special moves by pressing certain button combinations. By combining directional and attack buttons players can smash teeth with the signature 'Shoryuken!' or blast opponents out of the way with a well aimed Hadouken. 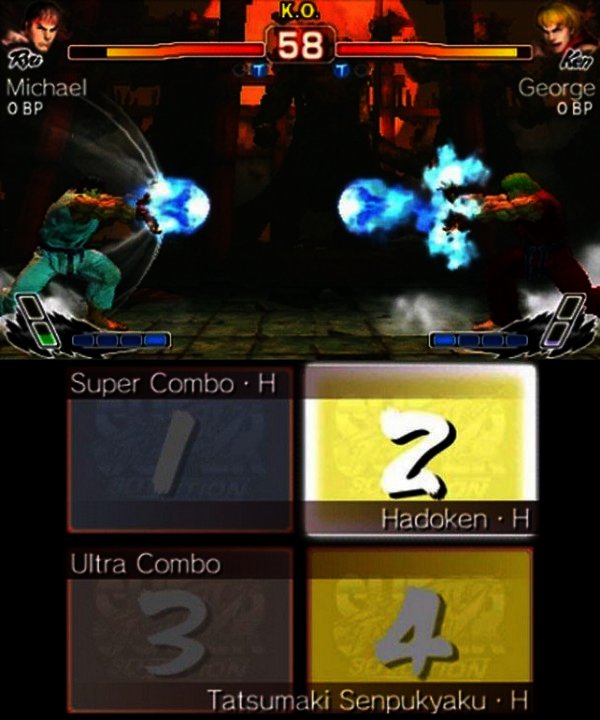 If you really want to lay down some hurt though players can launch super and ultra attacks by depleting their EX and revenge meters, which are filled up over the course of the match when dishing out damage or taking hits. These complex moves, usually involving numerous button presses, unleash devastating screen-shaking attacks on your foes, wholly capable of turning the tide of any battle.

The thing is, these moves used to be quite challenging to pull of if you weren't a Street Fighter veteran, but the good news for 3D Edition owners is that Capcom has given this version of the game a quick and easy method of executing these attacks, and it's called a touch-screen.

Causing a reasonable amount of consternation among Street Fighter purists is the handheld version's most notable change, one-touch combo execution via the 3DS's touch-enabled display. During battles the bottom display shows four boxes, housing your character's super and ultra attacks in addition to two regular moves. This means that in the heat of battle a player can now simply tap the corresponding box on the 3DS's touch-screen and their character will execute the given combo, a much faster and less hassle free way of enjoying some of the best parts of the game.

And while hardcore fans may lament the ease this change has bought about, it must be noted that a Lite and Pro mode is available. In Lite mode players have quick combo access, but in Pro mode the four boxes instead house simpler (but no less useful) button combinations, which can be customised to fit a player's preferences.

This new interface ensures that even Street Fighter newcomers can easily eek enjoyment out of the game, with even the most spectacular combos now available at their fingertips. This lowers the learning curve for new players, not requiring them to spend hours memorising movesets, but rather enabling that which we all seek in games, namely having fun. This isn't to say that the game has been turned into a special move spam fest, super and ultra attacks obviously still depend on your EX gauge, meaning players can't just use them from the start. And given Street Fighter's solid gameplay and surprising amount of strategy, lots of the time it's well-placed normal attacks that win a match, not special moves. 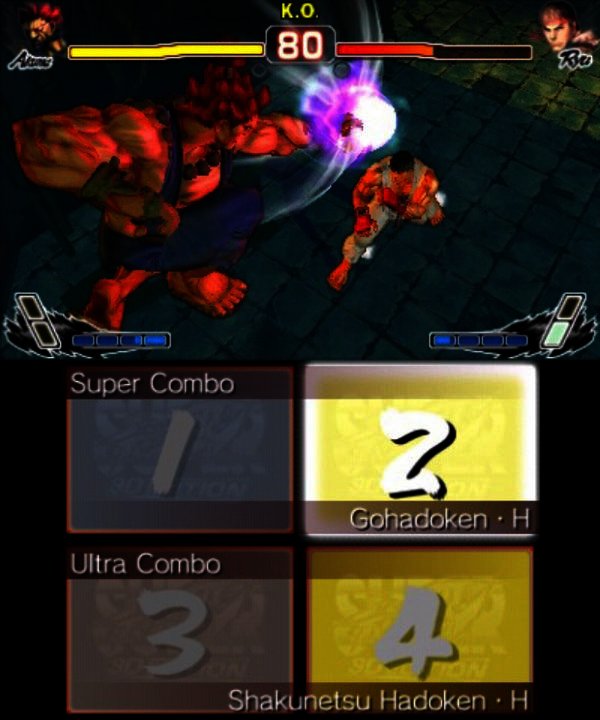 As mentioned previously, all 35 characters from Super Street Fighter IV are playable in the 3D Edition, including series favourites such as Ryu, Ken, Blanka, Sakura and Chun-li. When playing in Arcade mode players can complete short storylines for each character by defeating a number of AI opponents, with impressive anime-style cutscenes fleshing out each character's story and motivation for fighting.

In between the fighting players complete special stages which sees them breaking a car into pieces or smashing falling barrels within a time limit, an amusing way of changing the pace of the fighting. After battling a number of computer opponents, including your specific character's rival, players face the final boss, Seth, in the most difficult of all the levels, and upon beating him they are rewarded with the final scene of their character's story.

It must be said that these AI opponents can become quite the handful, so don't crank the difficulty up too high from the get-go, they might just surprise you, especially on the later stages.

While Arcade mode follows the traditional fighting game recipe, the game also features a Versus mode where players can battle friends or AI opponents via local wireless. Challenge and Training modes also make an appearance serving as arenas where players can hone their skills.

One of the title's chief attractions is of course the Nintendo 3DS's 3D visuals, and we're happy to say that it looks absolutely fantastic, the best 3DS launch game we've seen in fact. While the 3D effects doesn't really add anything to the gameplay (it's a 2D fighter after all), seeing the characters pop out of their environments is still an amazing and highly engrossing experience.

Not one person we showed it to, no matter how "anti-3D" they may be could refuse the allure of the game, immediately being drawn to the eye-popping visuals. In addition to its 3D capabilities, graphics in the game was pretty and colourful, retaining much of its vibrant console flair.

Another addition to the 3D Edition of the game is a new camera angle known as Dynamic View. This view gives players a never before seen over-the-shoulder perspective as they duke it out with their favourite Street Fighter characters. It's definitely a novel addition, but we don't see the mode taking too much of your time, the 2D view still feels much more accurate when it comes to fighting. 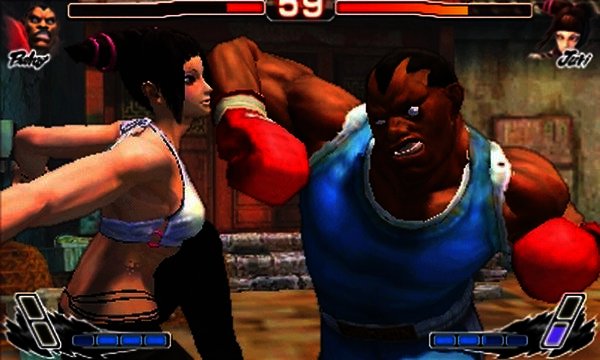 The game also allows players to flaunt their skills online, either in Versus mode against an opponent on the same wireless network, or if there aren't any 3D fighters in your area through full online play. The game supports Quick, Custom and Friend matches, with Quick matches pitting you against a random opponent; Custom matches enabling different options and Friend matches allowing you to play against people on your friend list.

Another nice addition to the game is Fight Requests, so if you can't find an online opponent right away, players can simply enjoy the Arcade game, with Fight Requests enabling other players to jump in and challenge you when they come online.

Unfortunately the game doesn't support any online leaderboards or tournaments, though players still earn points for winning battles, which is used to judge your skill level and make sure you're set up against similarly skilled opponents.

The game also supports the 3DS' StreetPass feature, which enables your 3DS to do battle with other devices in the vicinity, if their owners have turned on the feature. Within the game players can unlock a number of special character figurines, each sporting different stats, and when two 3DS's find each other these teams will do battle, with the figurines with the better stats prevailing.

New figurines can be traded with other players, but the easiest way to get them is to simply earn them via the 3DS's pedometer. This means walking around a lot with your 3DS, as each step counts towards more Play Coins. New figures are purchased via a small slot machine-like mini-game in which players push a big button, resulting in figurines revolving around the top screen, with another press of the button bringing the rotation to a stop and awarding the player with a new figure. This doesn't add much to the game, but may be attractive to some. 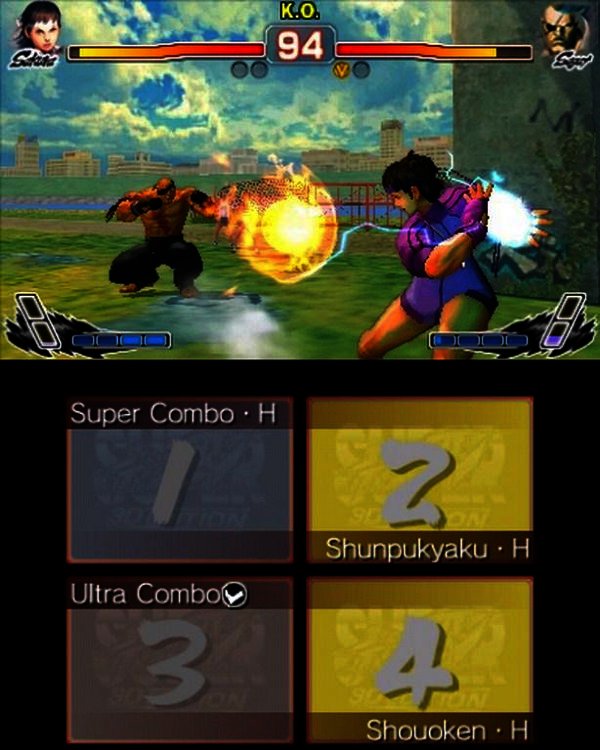 While fighting games on a handheld are always going to suffer from space constraints, Super Street Fighter IV 3D was by far the smoothest and most comfortable arcade fighting experience we've had on one. The 3DS's visuals give the iconic fighting series a great makeover by introducing new novice-friendly control schemes and camera angles, but at the end of the day keeping with the true Street Fighter spirit. This is a game worthy of its name.

PROS
Enjoying the spectacle that is 3D hadouken blasts alongside the ease of one-touch super moves.