Ratchet and Clank, the movie, may not have lived up to its expectation, but the new PS4 game, of the same name, most certainly does.

The new Ratchet and Clank game essentially reboots the franchise, which, incidentally, first graced the PS2 and then upped the graphics to earn a spot as one of the best games to bolster the PS3 library (I consider Tools of Destruction and A Crack in Time to be some of the most fun entries in the series). Thus, the bar was set high for the first Ratchet and Clank to make the leap to the PS4, and boy, do the titular Lombax and his robot companion jump and clear it.

To start with, Ratchet and Clank looks gorgeous. They were pretty games on the PS3, but on the PS4, the varied worlds that the duo visit in their quest to save the galaxy just pop off the screen. Textures look sharp and colours are vivid; a welcome break from the more muted palettes that many games, particularly post apocalyptic and horror ones, tend to favour. If you like science fiction art, I dare say the game offers a feast for the eyes.

The story is largely the same as the movie. Ratchet, an anthropomorphic cat like creature called a Lombax, works as a mechanic but dreams of being a Galactic Ranger. The opportunity for his life to take a turn literally falls into his lap in the form of Clank, a defective warbot which escapes from its factory and hastens to warn the Rangers of a deadly plot by Chairman Drek to invade other planets with an army of warbots.

The plot thickens, because Drek’s plans, which are more quickly made obvious in the movie, are far more ambitious and diabolical than a simple invasion, which Ratchet and Clank set out to investigate. 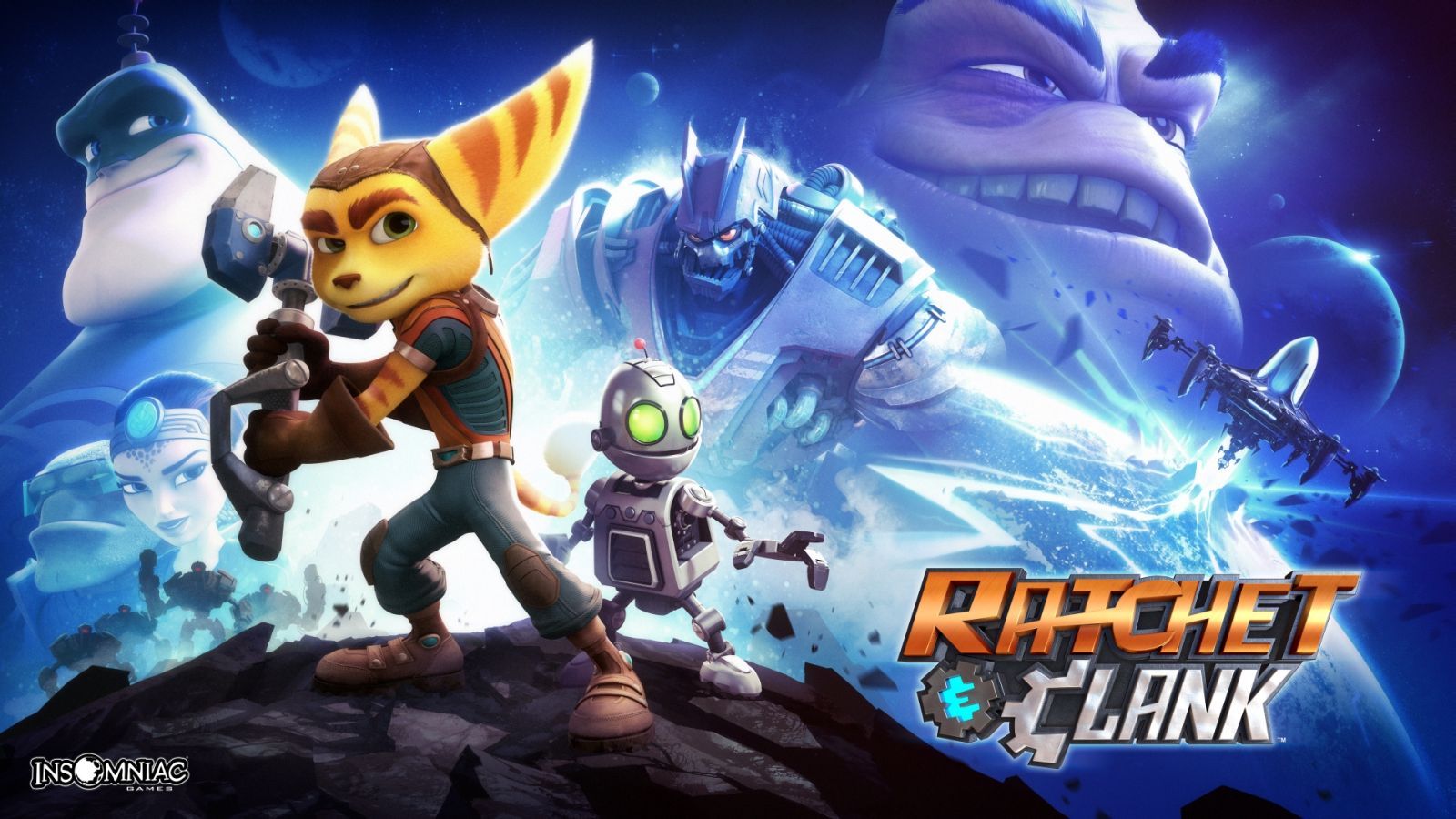 Part of the charm of the story is the sharp and clever humour, sprinkled throughout the game, which takes subtle digs at everything from politicians to company rules and regulations.

For example, early on you rescue a mayor of one planet, who promptly informs his citizens that his normal working hours – 12:00 to 12:30 every third Thursday - will now resume. In another instance, while storming one of Chairman Drek’s bases, a voice recording of Drek bemoans the fact that human resources (HR) won’t allow him to kill employees outright.

And humorously, also coming under subtle fire are reviewers themselves, with one character sardonically commenting that criticising other people’s work must take real talent. All of these modern day references are subtly woven into the tale, such that if you aren’t paying attention, they can be missed. If you are listening carefully though, they evoke a good chuckle when least expected.

Then of course you have the ever bumbling Captain Qwark occasionally piping through while you are in the midst of some critical and harrowing mission, explaining why the head of the Galactic Rangers couldn’t be there in person (massage appointments are so difficult to reschedule these days). 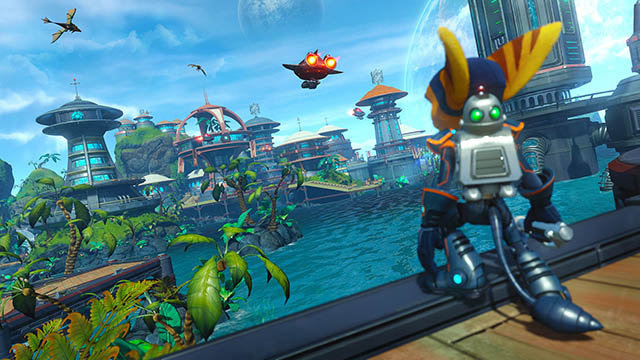 And suddenly, Ratchet realised that the endless process to get his visa was all made worthwhile.

Beyond how the game looks, how does it play? Well, fantastically, in a word. Part of the reason for this is that Insomniac Games seems to have taken everything that worked in the preceding games and placed it here. The weapons are as zany and appealing to use as ever, with many familiar favourites from Up Your Arsenal, Tools of Destruction and A Crack in Time, making a welcome return.

Also returning is the satisfying upgrade system – finding or earning raritanium enables you to increase the power and efficiency of each weapon, while these simultaneously level up with use to become more powerful.

Much like in the other games, this led to a few weapons becoming mainstay favourites. However, the game manages to incorporate each, with at least most of the weapons proving their usefulness in a variety of circumstances. The high powered Plasma Striker (sniper rifle) comes into its own against certain foes, but limited ammunition means you have to use it carefully. The Mr Zurkon (a robotic bodyguard with a Walker Texas Ranger/Chuck Norris personality) is great for dealing with crowds of enemies, while the Magma Blasters are high ammunition pistols that have a short range.

One of my favourites though was the Bouncer (unfortunately only available with pre-order at this point). Launching magnetised explosive balls, this made short work of a roomful of foes, exploding like firecrackers ahead of you and becoming massively, gleefully destructive as they are upgraded. Then of course there is the Groovitron, a floating disco ball which compels enemies to crank out some dance moves on your command, giving you a good breather and chance to pick them off one by one with other weapons.

Adding variety to the game is not just the planets you visits, but also enemies you battle. From piranha like fish to killer plants to the Snagglebeast (below), the game keeps on mixing things up, throwing distinctive foes at you at every turn. 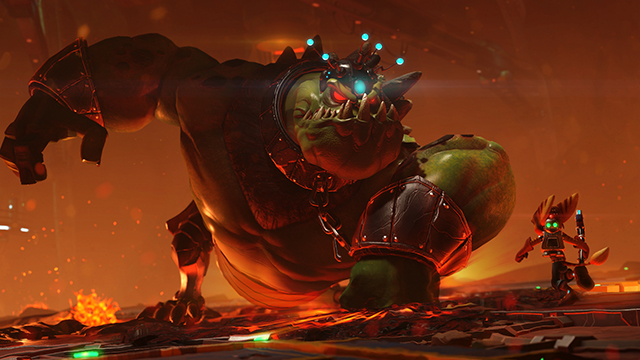 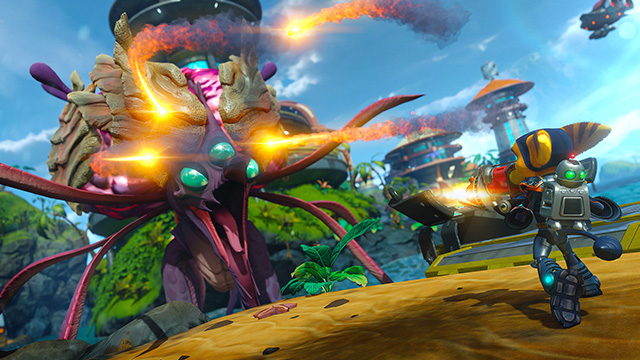 Keep coming back for more

Part of the game’s appeal is that as you complete missions, earn bolts and travel to new planets, new weapons become available, with which to play with and upgrade.

The weapons aren’t the only items adding fun to the gameplay, so too are the gadgets. These range from boots which attach to magnetic surfaces, an infiltrator code breaking gadget which activates a clever mini-game involving aligning lasers, to a hoverboard and jetpack. The latter are distinctive and have dedicated areas where you can use them, but again, nicely balanced so they don’t make traversal a bore (for example, with the jetpack you have limited fuel, so you can only propel yourself vertically for a limited time). Furthermore, grindrail sections are also quite liberal, as are a break from terrestrial combat to pilot Ratchet's ship and engage in aerial battles.

As in the previous entries, the game gives you plenty of reasons to explore the nooks and crannies of its many diverse worlds. Doing so enables you to find gold bolts, which unlock extras, and find the missing parts to the plans for an uber-weapon, the RYNO, which can be built for you upon acquiring all the pieces.

Additionally, new to the game is a card mechanic. Basically, you find sets of cards which then can be used to enhance your weapons even further, beyond and outside the scope of the weapon tree. And, since you are bound to come across duplicate cards, you can then exchange them for cards you don’t have, which can be used to enhance other weapons. It’s a clever dynamic, made more so by the fact that often planets merit a second and third revisit to discover all the goodies hidden around it. 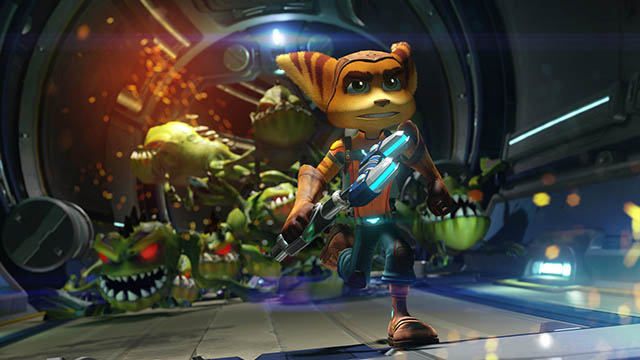 It was only at that moment, with four hundred creatures with glowing eyes and razor sharp teeth chasing him, that the gym membership proved worthwhile.

To buy or not to buy? That is the question

In short, the game, like many of its predecessors, is a joy to play. Inventive, fun, humorous and with lots to explore, it lives up to what has made the franchise so successful on its preceding consoles. The fact that it has never looked better doesn’t hurt either.

If there is a downside, I have yet to find it, something incidentally which kept me coming back to the previous games for further replays once New Game Plus was unlocked, and manages to do the same here.

Sweetening the deal is that Ratchet and Clank is actually cheaper than most games at present, with the pre-order costing R450, which makes it very good value, particularly as we now see games approaching and breaching the R850 to R950 mark. To mangle Hamlet’s famous words, To buy or not to buy, I would say, if you like fast paced action, solid platforming and your gaming served with a healthy serving of humour, then buy is the answer.