The first impression given by Samsung’s new 900X notebook is that it is the Windows equivalent of the MacBook Air. It’s thin and light at 1.31 kg, but feels solid and firm to the touch. While the all black finish made it minimalistic in its appearance, it is nonetheless very stylish, precisely because of the simplicity of its design and the quality of the material used to construct it.

The 900X’s slim profile seemed to make it ideal for a crowded boardroom meeting or anywhere one wishes to quickly open it up and start typing without being weighed down by a heavier notebook. Additionally, its light weight made it easy to perch on a leg or hold in one hand and take notes.

Like the Asus U36S the 900X has a clean design, with just a plain, silver Samsung logo emblazoned on the front and thin curving strands of chrome lining the sides, lending it a subtly futuristic appearance.
Although the notebook has a metallic feel, it is in fact, constructed of Duralumin, which is apparently the same material used in aircrafts and twice as strong as aluminium. This is responsible for the notebook’s solidity that we found to be a welcome departure from the hard plastic found in so many consumer devices at the moment.

Additionally, the 900X has gently rounded edges that offset what would otherwise have been an austere, even stern appearance. Although we expected the all black appearance to be a fingerprint magnet, it didn’t retain fingerprints as readily as we expected. Even so, we were happy to see Samsung thoughtfully include a cleaning cloth with the notebook. 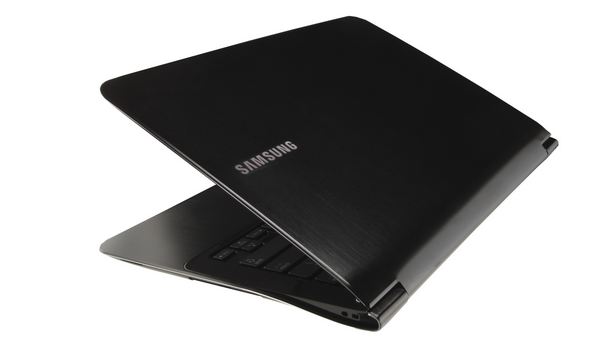 A touch of flash emerged when we powered up the notebook and saw the keyboard illuminate in a soft white light. The 900X boasted an auto-sensing backlit keyboard, that automatically lit up as the environment in which it was being used became darker. We found this to be quite accurate and give pleasing responses when moving from a darkened auditorium to a lighter outdoor setting, as the keyboard gave just the right amount of light to make finding the keys easy, particularly in darker rooms.

This further mitigated the fact that the keys are actually quite small, with the Shift key in particular being smaller than average.
It was the larger size trackpad that took a little longer to become accustomed to. Firstly, there are no trackpad buttons – both left and right click is accomplished much like on the MacBook, with clicking on the left hand side and right hand side of the touchpad.

Additionally, the lower left of the touchpad seemed somewhat less responsive than the rest of the touchpad. An added problem with a full touch-sensitive trackpad, is that when clicking there’s still an amount of movement on the cursor. However, multi-touch worked as well as expected, and was fast and responsive.

Additionally, the 13.3" screen, which boasted 16 million colours, a 1366 by 768 resolution and 400 nit brightness, was sharp and clear, and offered up vivid colours and satisfying contrast that made working on the smaller screen comfortable rather than a strain on our eyes. Additionally video playback was quite impressive, rendering vibrant colours and great detail, using the notebook’s HD 3000 integrated graphics card.

While the 900X has cut down markedly on weight, it hasn’t done so at the expense of performance. The notebook ran an Intel Sandy Bridge Core i5 CPU at 1.5 Ghz, with an adequate four gigabytes of memory on the 64 bit Windows 7 Home edition. Additionally, it scored 2955 in our 3D Mark 06 benchmarking test. While this was not as high as the 4857 score attained by another recently reviewed thin and light, the Asus U36S, it  is still a higher score than the ultra portable Toshiba Portege R700's score of 1954.

As befitting a light and inconspicuous notebook, the Samsung ran particularly quietly and produced little discernible heat, making it a pleasure to keep on our lap for long periods. Its battery life was also impressive, running between five to six and a half hours before requiring a visit to the charger. As with most devices, this varied depending on whether we switched Wi-Fi on or not.

Perhaps the most important feature of the 900X, was its quick response time. The system took under twenty seconds to boot up from a powered down state (it took us closer to a mere fifteen seconds to power up the system) and, if in a sleep state, it woke up in an impressive three seconds. This was due in part, to the 900X’s respectable 128 GB solid state drive. However, only 98 GB of the drive was usable free space. 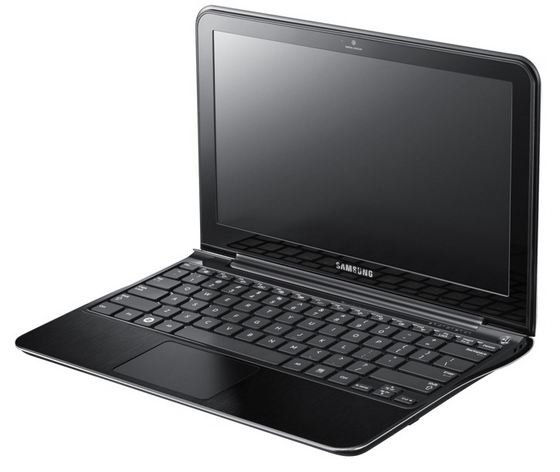 The one thing lacking on the notebook was an optical drive. Nonetheless, several ports were neatly hidden behind two flaps on the sides of the notebook. These included a micro SD slot, a 3.5 mm headphones jack and one USB 2.0 on the right hand side, and a mini Ethernet, mini HDMI and a USB 3.0 on the left.

Additionally, another notable part of the Samsung 900X that has enhanced its overall light weight was the absence of the usual, heavy  brick-sized charger. Instead, the 900X used a smaller charger more reminiscent of that found with the MacBook Pro. This is a big benefit when travelling, making the system truly portable.

It was hard to find fault with the 900X, as for a thin and light, it hit just about every note. The bright screen, solid yet light build, auto regulating illuminated keyboard, generous battery life and quick boot times were some of our outstanding features, and made the 900X one of the sharpest notebooks we’ve played with to date this year. The P900X is currently available with an RRP of R14 000, which definitely puts it in the premium part of the market.