Up until very recently, being a BlackBerry smartphone owner could be compared to having a relative in prison  ?�  you still love your device, but when a debate is raging around which smartphone is best, you weren’t going to chip in.

For fans of the BlackBerry platform, the good news is that in the BlackBerry Z10 they now have a smartphone that can compete against some of the top devices currently available. No more worrying about coming to grips with a new operating system (OS), or losing BBM contacts – the BlackBerry Z10 is a modern phone in all regards.
TechSmart Video: BlackBerry Z10 Hardware - What you need to know.
Look and feel

Like most modern smartphones, the Z10 is candybar shaped, and with its all-black or white design, it does not look out of place on the dancefloor nor on the boardroom table. As far as its size and weight, there’s no cause for concern, since the Z10 is very comfortable, and not nearly as big and bulky as Nokia’s Lumia 920 (review) for example.

On the back there is a texturised plastic that has a rubberised feel to it, making it grip-friendly, while in the corner the eight megapixel camera with LED flash can be spotted. Open the cover and you’ll find the rather large Lithium Ion battery, the micro-SIM slot and an extra slot for a hotswoppable microSD card.

The power button is located right at the top of the unit. Press this once and you’re able to access the sleep screen. Simply swipe it up to start working. To the right of the display you’ll find the volume buttons, as well as a voice command button situated in between. To the left you’ll see your microUSB slot, with a micro HDMI slot available to hook the Z10 to a secondary screen. No HDMI cable is provided with the unit, but the USB cable is. 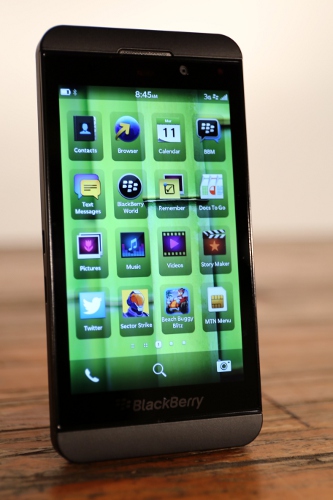 BlackBerry opted for a Business Casual design that is at home on the boardroom table and on the dancefloor.
The screen

It is clear that BlackBerry put a lot of effort into the Z10’s 4.2" display. It might not be as big as the Samsung Galaxy S3’s 4.8" but it’s larger than the new iPhone 5’s 4" screen, while topping both when it comes to pixels per inches (ppi). An excellent 365 ppi allows for a crisp display of photos, webpages and games.
This while everything runs very smoothly thanks to improvements that BlackBerry 10 brings to the table. If there is one complaint, it is that it looks slightly less saturated than other top-end devices, while it’s also not as good at handling glare. 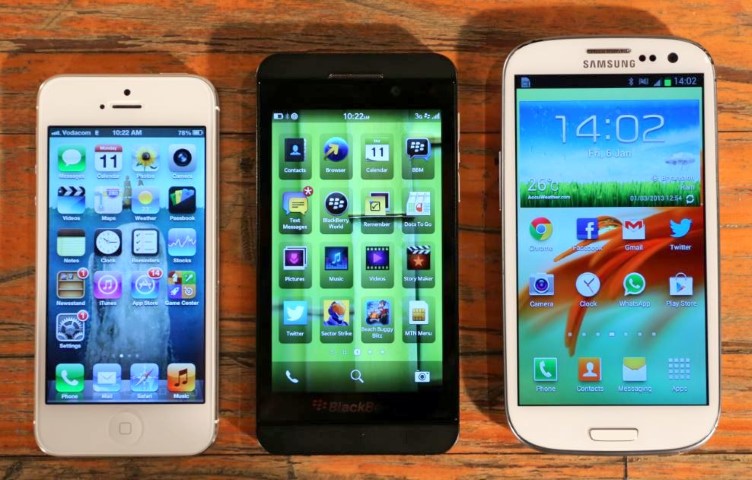 It's tough being the middle child: BlackBerry's Z10 (middle) flanked by the iPhone 4S (left) and Galaxy S3 (right).
Inside the Z10

Doing the gruntwork inside the Z10 is Qualcomm’s MSM8960 dual-core 1.5 GHz Snapdragon processor. We’ve seen this chipset before inside Nokia’s Lumia 920 and Sony’s Xperia V smartphones, and with BlackBerry 10 running the show, we had no complaints regarding the speed of the Z10. It is helped along by a generous 2 GB of RAM, while BlackBerry provides 16 GB of storage space as standard. Seeing that you can expand this by up to 64 GB via microSD, this is quite sufficient.
Connectivity

Connectivity options on the BlackBerry Z10 are plentiful. Everything is catered for including Bluetooth 4.0, Wi-Fi 802.11 n with the ability to hotspot the phone, and NFC to connect other NFC devices with a simple tap. The BlackBerry Z10 STL100-1 version supports HSPA+ networks with download speeds of up to 21 megabits per second.
In terms of optics, the Z10 sports an 8 MP autofocus camera capable of full-HD (1080p) video recording, as well as a 2 MP front-facing snapper for taking self-portraits and recording HD-Ready (720p) videos. More about extra features on these later.
Battery life

For some the Z10’s battery life has been miserable, for others not too bad. During the course of a day we started getting concerned about the 1800 mAh Li-Ion battery about two hours earlier than for example with the Samsung Galaxy S3 or HTC One X. To enhance battery life, make sure NFC is turned off, turn down screen brightness and make sure your lock-screen timeout limit is fairly fast. Also make sure the latest software update is installed by checking ‘System Settings’ > ‘Software updates’.
Continue to part 2 for more on the BlackBerry Z10’s software.
Article written by Mike Joubert and Hanleigh Daniels.