Ghost in the Shell

Published with permission from Spling.co.za, a must visit local site for movie news and reviews. Check it out now.

Ghost in the Shell is based on a manga series, which was later adapted into an animated feature in 1995. Partly inspired by Arthur Koestler's The Ghost in the Machine and also an inspiration for The Matrix, this much-loved Japanese series continues to inspire. Now unveiling its latest iteration, an almost inevitable live-action adaptation, starring Scarlett Johansson and directed by Rupert Sanders (Snow White and the Huntsman), we get a chance to see Major come alive, even if her shoes seem too big for her.

The film takes place in the not-too-distant future, as we're introduced to Major, a cyber-enhanced human designed to be the perfect soldier and weapon against the world's most dangerous criminals. It loosely covers the same ground as the anime, as a complex hunt for a mysterious hacker unfurls with great revelations around Major's identity, the criminal mastermind and the crime-fighting organisation she represents.

While Johansson has worn skin-tight outfits playing Natasha Romanoff in The Avengers, she's gone as skin-tight as it gets in depicting Major, adopting a translucent costume. The visual effects around this outfit make it almost like a character in itself, which certainly helps since Johansson is playing Major in a performance almost as alien and robotic as her take in Under the Skin.

She's supported by Pilou Asbæk, of Game of Thrones fame, who makes the best animation to live-action transition as her beefy and loyal sidekick. Takeshi Kitano is tremendous as Aramaki, rooting Ghost in the Shell and delivering most of his lines in Japanese. Juliette Binoche echoes her role in Godzilla as the conflicted Dr. Ouelet, while it's great to see Michael Pitt getting some more prominent screen time.

While faithful in terms of basic plotting and some direct adaptations of scenes from the original Ghost in the Shell, the film has its own flavour. "Own" may be a bit generous when you contrast their effort with influences like The Fifth Element, Johnny Mnemonic and Blade Runner, tent poles for the live-action adaptation. While watching the 1995 anime film draws direct parallels with The Matrix, it's almost like they've fought against this with the live-action film.

Major is reminiscent of Leeloo from The Fifth Element. Both beings are secret weapons and find themselves in a similar urban environment in terms of design and infrastructure. Ordinarily, this role would've been awarded to Milla Jovovich, who has become the quintessential kick-ass female lead, powering this type with roles in The Fifth Element and Resident Evil. While Jovovich may have been a better casting call, Johansson's star power makes her more bankable.

The Johnny Mnemonic chicken-or-egg factor and Keanu Reeves correlation with The Matrix makes its release in the same year as 1995's Ghost in the Shell, quite curious. The opening scene has some synergies with Johnny Mnemonic, which while inferior and locked into the 90s, covered similar stylistic terrain in terms of Yakuza-inspired cyber criminal warfare. 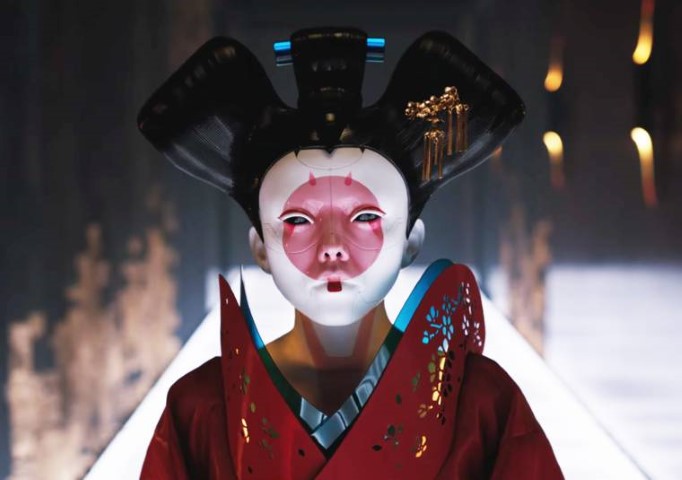 While Blade Runner is scheduled for a reboot with Blade Runner 2049 later this year, Ghost in the Shell has incorporated a similar mix of decaying environment, dark mood and ominous atmosphere. This will help warm fans up for the reboot, but also shows how safe and magpie-orientated the new Ghost in the Shell really is under the direction of Sanders.

The cinematography is quite dazzling and the environment has depth and weight, a surprising amount, considering the degree of CGI. The translation of style is mostly on target and the film-makers have used an enhanced version of the soundtrack from the anime version. The strongest changes are made in the character's origin story, a few revelations and in the casting department, a point, which while criticised, has been handled quite deftly.

Ghost in the Shell is a beautiful and serviceable adaptation, which doesn't tarnish the series or break new ground. While we're not as invested in the characters as we would have liked, the treatment is brooding and the stylistic choices are familiar and eye-popping enough to smooth over the rough edges. The experience isn't entirely satisfying, but it does deliver on its promise of escapism.