This review is written by movie fundi Spling. For more awesome movie news and reviews, visit his website at www.spling.co.za.

Kick-Ass was unabashedly proud of its pick ‘n mix of genres and brew of violence, youth-centric flair and cult cool class – borrowing aspects from better action, crime and superhero films. Not all that much has changed in Kick-Ass 2, in fact, one of its main criticisms is that it’s more of the same.

More of the same won’t really deter fans of the original. It kicked ass… and reliving much of what made it kick ass is a pleasure. Hit-Girl, played by Chloe Grace Moretz, has become a teenager and in many ways Kick-Ass 2 is her coming-of-age story. Kick-Ass (Taylor-Johnson) and Hit-Girl are doing a lot of growing up, reaching that tender age when vigilante activities could get them grounded… or worse, imprisoned.

Never Back Down writer-director Jeff Wadlow has picked up where Matthew Vaughn left off and he does a great job of keeping the sequel within the Kick-Ass universe. The opening scene features Aaron Taylor-Johnson and Chloe Grace Moretz in an echo of a scene from the original between Big Daddy (Nic Cage) and Hit-Girl. This signals the intentions of the sequel with Kick-Ass becoming an apprentice to Hit-Girl in much the same way Big Daddy played Mr. Miyagi to Hit-Girl in the first Kick-Ass.

Christopher Mintz-Plasse reprises and reinvents his role in Kick-Ass 2 as a super villain gimp. Loaded with limitless resources, a rebellious streak and a vengeful heart – he sets about recruiting an army of thugs to carry out his revenge on Kick-Ass like a lightweight hybrid of The Joker and Batman from The Dark Knight. Following in the shadow of his deceased father, he begins a series of comic book style take downs on a known group of superhero vigilantes. 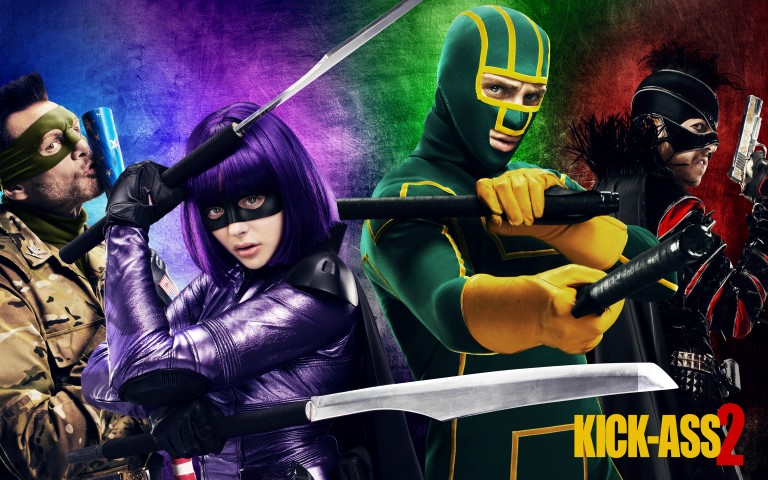 The casting is superb with notable highlights in Jim Carrey and John Leguizamo, who replace the likes of Nicolas Cage and Mark Strong from the original. Carrey’s almost unrecognisable performance as Colonel Stars and Stripes is gritty with enough interest to have warranted a spin-off. However, it’s not Carrey’s film and neither is it Leguizamo’s, despite our wishing their characters had been more central.

Kick-Ass 2 has taken to the superhero team trend and as a result, The Mystery Men connection is a lot stronger as the co-leads bond with other crime-fighting vigilantes, inspired by the Kick-Ass phenomenon. This gives the film a fresh feeling, suffering with its co-leads as they become adults and revisiting the real-life superhero story with fresh recruits.

Kick-Ass 2 is a timely film. Where comic book superheroes initially gave people an escape from their lives, Kick-Ass encourages people to take up a cause and become their own heroes. Are we taking responsibility or passing the buck? It’s a personal crusade that’s becoming more popular as citizens lose faith in the system and become more self-reliant, finding that real change can only be accomplished by taking the can-do approach.

The action sequences are just as exhilarating as Kick-Ass, delivering a vicious and visceral sucker punch. Kick-Ass 2 is every bit as violent and trashy as the original and retains that uneasy tension between the unreality of superheroes and gravity-sucking reality of death. There’s more in the way of beat downs than gun play, which is possibly why Jeff Wadlow made a good match.

Kick-Ass 2 is a mixture of Fight Club, Jawbreaker and Mystery Men. Given that there is more of Hit-Girl’s story at play, Wadlow brings in Jawbreaker-style high school drama as Hit-Girl tries to quit her caped adventures and settle down under a guardian appointed by her father. All the while, Kick-Ass is trying to respect his father, finding that he shares more in common with an underground squad of vigilantes.

Kick-Ass 2 is a worthy sequel: action-packed, entertaining and funny. The solid casting and performances add to the fun of the ass-kicking and we’re able to live vicariously through these vigilante knights without suffering the pain. While it certainly packs a punch with frequent ultra-violence, the coming-of-age story’s emotional weight also catches you off-guard. If you enjoyed Kick-Ass, you’ll be more than satisfied with Kick-Ass 2.