Movie review - Now You See Me

Movies and magic share the art of illusion. Making you believe something's real is the end goal for both entertainment mediums, which can be a tricky balancing act in itself. Slick crime thriller Now You See Me walks this tightrope, drawing audiences in with its heady mix of intrigue and crime, in an attempt to breathe new life and excitement into an industry that desperately needs to rekindle its sparkle.

The Four Horsemen, a group of magicians, join forces under mysterious circumstances. A year later, they begin a magical U.S. tour leaving a series of Robin Hood heists in their wake as police try to debunk their illusions and catch them in the act with the help of an old ‘enemy’.

The first thing you will notice about Now You See Me is its top drawer line-up. Jesse Eisenberg, Woody Harrelson, Isla Fisher and Dave Franco make up the enigmatic and notorious Four Horsemen, delivering charming, egotistical, showy and entertaining performances. They're counterbalanced by a pair of investigating agents in Mark Ruffalo and Melanie Laurent, and influential outsiders in Michael Caine and Morgan Freeman. 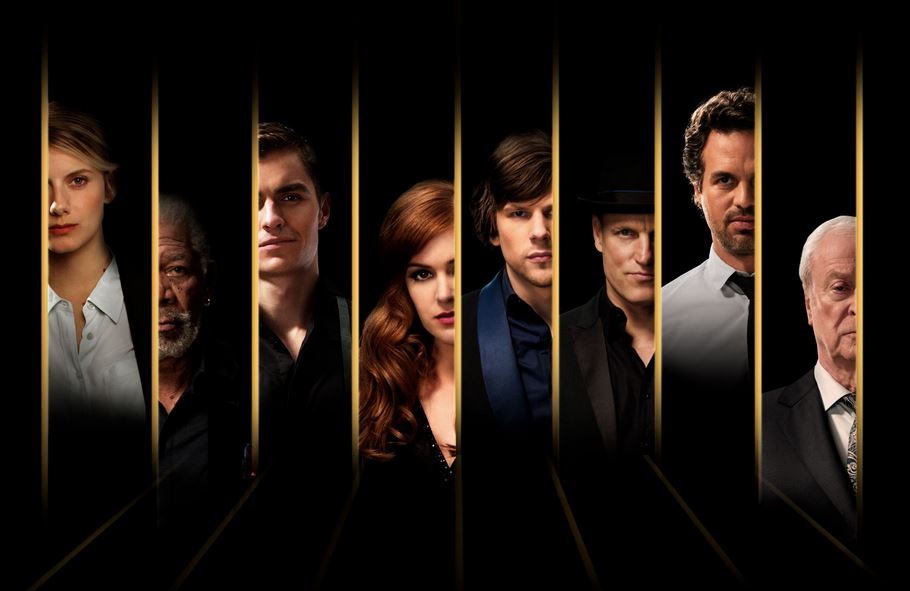 Now You See Me is best described as an Ocean's Eleven-styled heist with flashes of Inception. The Las Vegas showmanship, smooth criminals in suits and elaborate scheming bring the same brand of sharp-witted banter, thrilling escapade and flashy characters into focus. This is tempered by the deceptive mind games and illusion of Inception, which play out as a broader metaphor for the film industry.

Inception has been compared to the film-making process, starting with Leonardo DiCaprio as director. Now You See Me ventures into similar allegorical territory with the apocalyptic Four Horsemen reference signalling "the end" of the film industry as we know it. This version would suggest the Horsemen are the film-makers, responsible for providing the entertainment, that Tressler (Caine) is the production company, Bradley (Freeman), representing the critics and media and the investigating officers, most likely the doubtful audience.

Now You See Me embodies fun fair flair, under direction from The Incredible Hulk's Louis Leterrier, and requires that you strap yourself in and roll with it for maximum entertainment value. The story concept does stretch the bounds of disbelief at times, but no more than what you would expect from a film like National Treasure. Nit-picking at the seams is like going behind-the-scenes and only serves to ruin the fun and magic.

Backed by a stellar cast and delivered with a twinkle in the eye, Now You See Me gives us reason to fall in love with the illusion of cinema all over again. In much the same way as a master magician, Leterrier swathes us in twists, surprises, laughs and thrills that all form part of the fun in this lively and exciting escapade.